A total of 5,000 patients in England have been signed up to trial the radical 12-month diet programme to slim them down and restore their health.

Volunteers will be restricted to just 800 calories per day - a third of an adult man's recommended daily intake and almost half of a woman's.

Their meals will be limited to blended shakes, bowls of soup and health bars for three months, before real, nutritious food is reintroduced for the remaining nine months.

Type 2 diabetes is linked in most cases to being overweight or obese, not doing enough exercise and consuming too much sugar.

The move is an expansion of a smaller trial after a 2018 study by Oxford University showed almost half of people who stuck to the soups and shakes plan saw their diabetes go into remission after a year.

Diabetes is estimated to cost the health service £10billion a year, while almost one in 20 prescriptions written by GPs are for diabetes treatment.

The condition is also one of the biggest risk factors in coronavirus deaths, with around a third of UK Covid-19 victims also suffering from the condition. 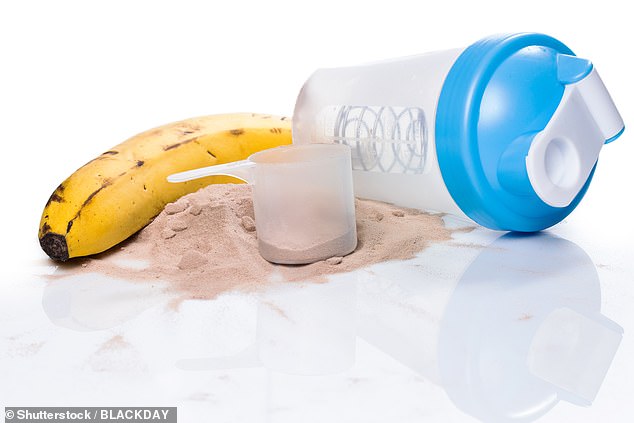 A trial of the soups and shakes diet found it is suitable for most people who want to lose weight and is effective because people consume fewer calories than they burn.

The 5,000 volunteers – who have all been diagnosed with diabetes in the last six years – will start the programmes today.

They will be told to swap out food for blended meal replacement shakes and soups for three months.

For the rest of the year, they will be coached by nutritionists, who will help reintroduce ordinary, nutritious meals into their diets and increase their exercise levels.

CAN DIABETES BE REVERSED?

It is possible to put type 2 diabetes into 'remission', when blood sugar levels are below the diabetes range and the patient no longer needs to take medication.

The term 'reversed' is not often used because it implies cured. But there is no guarantee a person who has had type 2 diabetes is free from the disease forever.

The strongest evidence for reaching type 2 diabetes remission points towards weight loss in people who are carrying extra weight or have obesity.

Scientists believe that storing too much fat in the liver and pancreas affects how type 2 diabetes develops and losing this fat can help put the disease into remission, according to Diabetes.org.

The website says: 'In fact, losing around 15kg significantly increases your chances of type 2 diabetes remission.'

It's easier to get diabetes into remission closer to the time of diagnosis.

Professor Jonathan Valabhji, NHS national clinical director for diabetes and obesity, said: 'This is the latest example of how the NHS, through our Long-Term Plan, is rapidly adopting the latest evidence-based treatments to help people stay well, maintain a healthy weight and avoid major diseases.

'There has never been a more important time to lose weight and put their type 2 diabetes into remission, so it's good news for thousands of people across the country that practical, supportive measures like this are increasingly available on the NHS.'

Bridget Turner, director of policy campaigns and improvement at Diabetes UK, said the programme is 'an important first step' for patients to access a remission programme within the NHS.

She said: 'We know that some people with type 2 diabetes want and need support from healthcare professionals to lose weight effectively, and now as these programmes are piloted across the NHS they will.

'People with type 2 diabetes who have put their diabetes into remission frequently tell us how it has changed their lives.

'We are so pleased to see that others will now have the same opportunity and hope that it won't be too long before more remission programmes are rolled out across the country.'

Type 2 diabetes is the most common form of the disease, affecting 90 per cent of all 4.7million diabetics in the UK.

Type 1 diabetes is caused when the pancreas does not produce enough insulin to regulate the body's blood-sugar levels, and is generally caused by genetics.

Whereas type 2 is linked to obesity and eating too much sugar, which cause the body to become resistant to insulin.

Because type 2 is mostly caused by people's lifestyles, it can be reversed through low calorie and low sugar diets.

The trial comes just more than a month after Boris Johnson's Government launched a drive to tackle obesity after the Prime Minister realised his own weight may have contributed to him ending up in intensive care when he caught coronavirus.

TYPE 2 DIABETES CAN BE TRIGGERED BY A 'WEIGHT THRESHOLD'

Every person has a target weight they must stay below or they risk getting type 2 diabetes, a study suggests.

They claim millions of people could avoid developing diabetes if they kept their weight in a healthy range below that target.

And for those who are diagnosed with type 2 diabetes, the condition can be reversed entirely by aggressively reducing calories, the scientists say.

Because BMI is specific to each individual, everybody will have a different threshold at which they are deemed 'overweight' or 'obese' and risk developing diabetes.

BMI is a crude measure that uses height and weight to work out if someone is a  healthy weight.

The researchers haven't given exact figures, but they say their findings will help doctors identify who is most at-risk of diabetes, based on their weight.

The study, conducted by the University of Cambridge, looked at 445,765 people in the UK Biobank.

Scientists found people deemed severely obese, who had a BMI of 35 or more, had an 11-fold increased risk of diabetes compared to the lowest group, with an average BMI of 21.7.

That was the case even when genetic predispositions to the condition - such as a family history of diabetes - were factored in.

'The findings indicate that BMI is a much more powerful risk factor for diabetes that genetic predisposition,' he said.

'This suggests that when people cross a certain BMI threshold, their chances of diabetes go up and stay at that same high-risk level regardless of how long they are overweight.'

Mr Johnson said that since his recovery from the deadly illness he had focused on getting fitter by going on morning runs with his dog Dilyn, and he was pictured last week running in London with a personal trainer.

He has urged the nation to follow his lead, insisting the Government's 'better health strategy' will help people to 'bring their weight down' and better protect the NHS.

The UK is the second fattest country

International students are being conned into faking their own abduction. Here's ...