Britain today confirmed another 1,940 cases of coronavirus in the biggest surge for more than three months, with May 30 the last time so many people were diagnosed with the virus.

There are 1,530 people testing positive, on average, each day - a jump of 30 per cent in one week. The seven-day rolling average has been steadily increasing since reaching record-low numbers in mid-July.

Despite this, scientists say the soaring number of tests and still-falling hospitalisations show that a second wave is not incoming, and that a better testing system is simply picking up more young people who only get mildly ill and weren't getting tested before.

A further 10 people are confirmed to have died across all settings, according to the Department of Health, taking the total to 41,537. Most are expected to be in England, considering none were reported by the individual health agencies of Wales or Scotland. One was in Northern Ireland.

The fact that deaths continue to fall - the seven day average is today 37 per cent lower than it was last Friday - also suggests that Britain is not staring down the barrel of a crisis like the one that struck in March and April. Instead, as different groups of people get infected and the threshold for getting a test is lower, the fatality ratio now should remain low.

Professor Carl Heneghan, a medicine expert at the University of Oxford, said this week: 'What we are seeing is a sharp rise in the number of healthy people who are carrying the virus, but exhibiting no symptoms... They are being spotted because – finally – a comprehensive system of national test and trace is in place.'

The number of tests being carried out has increased by 20 per cent from the start of July to now. But the number of positive results has only crept up by only 0.3 per cent in the same period, suggesting new cases are a combination of more tests, and only a slight rise in infections in hotspots.

It comes as Government scientists today warned the Covid-19 reproduction rate was still likely above one across the UK, meaning that the virus is not totally under control and local outbreaks have the potential to spill into larger ones.

The R - the average number of people each virus patient infects - needs to stay below one or the outbreak could start to grow exponentially. But SAGE estimates it is still hovering between 0.9 and 1.1, having remained unchanged from last week. However, the UK's low infection rate means small outbreaks can skew the estimate upwards.

SAGE also predicts that Britain's outbreak is now growing by up to two per cent per day, after being in retreat for months following lockdown.

But other official data published today from swabbing thousands of random people across England suggests the number of people catching the coronavirus each day is at a steady level, and has been since July.

Some 27,100 people in England are thought to be infected at any one time - 0.05 per cent of the population or one in every 2,000 people - according to the Office for National Statistics, which said today: 'Evidence suggests that the incidence rate for England remains unchanged.'

In other coronavirus developments today:

There was outrage as British holidaymakers fleeing Portugal pay nearly £1,000 to fly home to beat quarantine - only for ministers to KEEP the country on its safe travel list;  Germany has nearly DOUBLED its testing rate to screen thousands of returning air passengers - as Britain continues to hold out against airport checks; Is Boris's back-to-work drive starting to work? 57% of employees say they travelled to the office in past seven days with many balancing WFH with commuting - a rise from 49% the week before; Grant Shapps accuses Scotland and Wales of 'jumping the gun' by putting Portugal on quarantine list and blames THEM for mass confusion among holidaymakers; Russia's Covid vaccine might actually WORK: Moscow scientists claim 'Sputnik V' jab that stunned scientists when Putin gave it world-first approval proved safe and effective in early clinical trials. 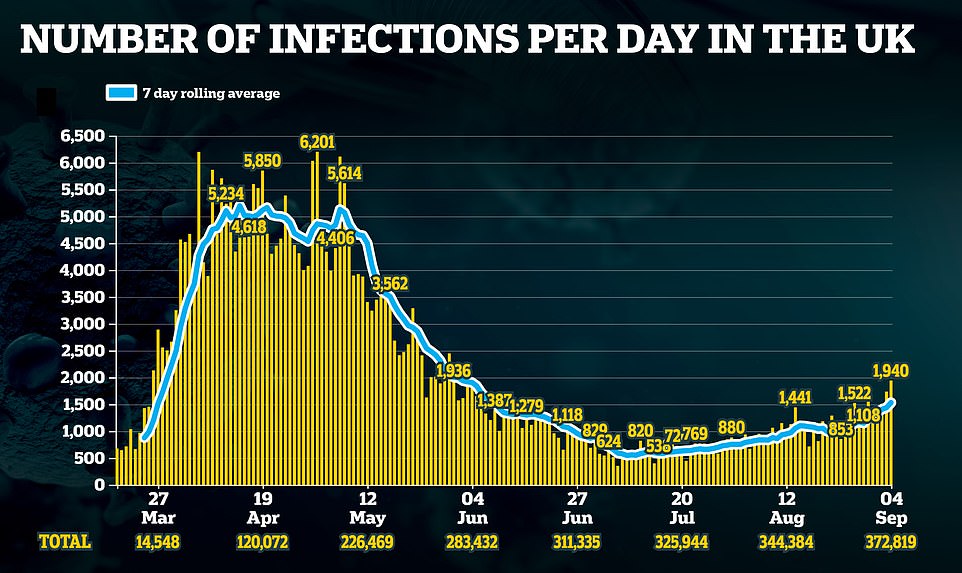 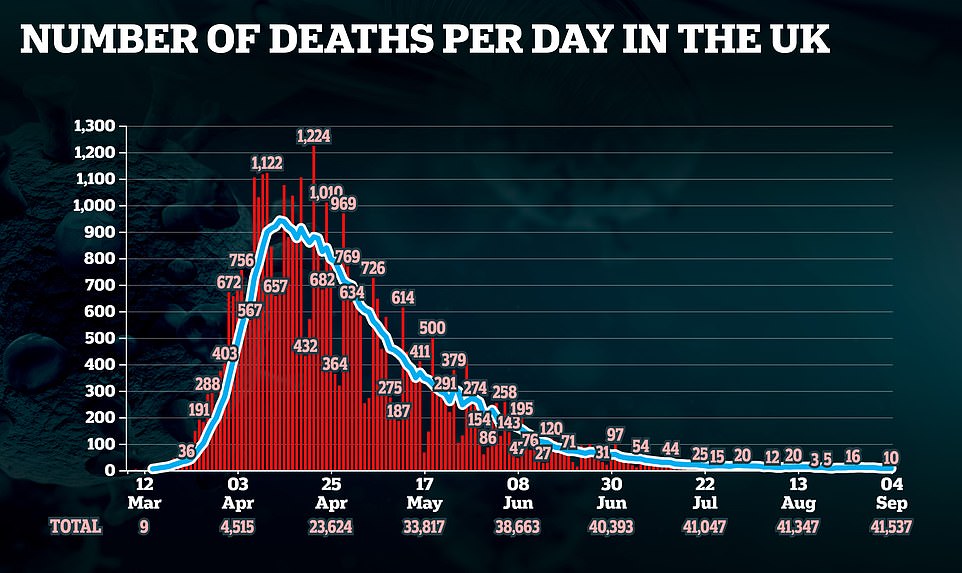 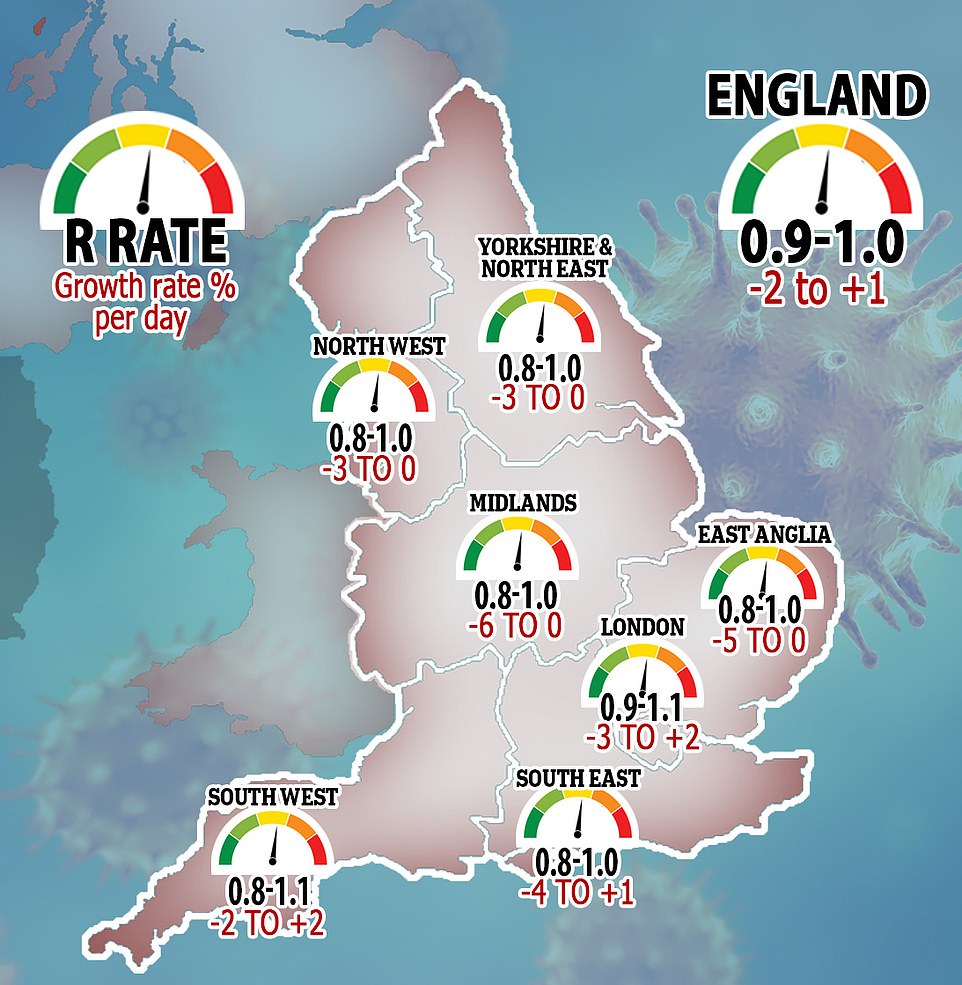 The 1,940 cases diagnosed today is the highest since Saturday, May 30, when 2,445 people tested positive for the disease. But it's nowhere near the rates seen at the height of the pandemic, when more than 5,000 were being diagnosed every day.

The figure given by the Department of Health each day is in relation to the number of people who have been given a positive test result. Most scientists say the rise in recent weeks is not a concern because it is the result of more testing in hotspots.

They say the rising figures are simply the result of young, healthy people being picked up on official figures. Previously, they were being missed because tests were reserved for the sickest people.

And on top of that, the first 'wave' is not considered to be over, and is likely to see bumps as the coronavirus fizzles out in response to easing of lockdown restrictions.

Health Secretary Matt Hancock said today efforts to control the coronavirus were working. But nevertheless, he added: 'I would urge everybody to continue to be vigilant - wash your hands, wear a face covering and keep social distance from those outside your household - so we can keep the virus at bay.'

THERE IS NO SIGN OF A SECOND WAVE OF COVID-19 IN THE UK, SAY SCIENTISTS

Britain is not entering a second wave of coronavirus infections and the young, mildly-affected people being diagnosed in rising case numbers are not likely to trigger a rise in hospitalisations, experts say.

Health Secretary Matt Hancock this week warned that the UK 'must do everything in our power' to stop a second surge of people going into hospital with the coronavirus, which he said was starting to happen in Europe.

But experts told MailOnline Mr Hancock's comments were 'alarmist' and that there is currently 'no sign' of a second wave coming over the horizon. The data shows hospital cases are also not rising by much in Europe, contrary to the Health Secretary's claim.

As of Monday there were only 764 people in hospital with Covid-19 in the UK, just 60 of whom are in intensive care. This is a sharp drop from a peak of 19,872 hospitalised patients on April 12.

The falling number of hospital cases comes despite infections having been on the rise since lockdown restrictions were lifted at the start of July. Experts say this is because the groups getting infected and diagnosed now are completely different to those at the start of the pandemic.

Scientists say it is younger people driving up infections and they are less likely to get seriously ill and end up in hospital. For that reason, hospital cases and deaths will not necessarily follow higher cases, and there may not be a deadly wave like the first.

Professor Carl Heneghan, a medicine expert at the University of Oxford, said: 'There is currently no second wave. What we are seeing is a sharp rise in the number of healthy people who are carrying the virus, but exhibiting no symptoms. Almost all of them are young. They are being spotted because – finally – a comprehensive system of national test and trace is in place.'

Mr Hancock said in the Commons on Tuesday that he feared this rise in infections in healthy people would creep into vulnerable groups if allowed to continue, saying it was a pattern seen in the US where cases are out of control again.

But scientists have shot down Mr Hancock's doomsayer comments, pointing out that deaths have not risen in France or Spain, and the reason hospital admissions have not risen in the UK with diagnosed cases 'simply reflects increased testing'.

Official data from the continent shows Europe's hospitals are not filling up with coronavirus patients despite a surge in positive tests - hospitalisations have been falling in France, Spain and Germany while cases have risen.

Open University statistician Professor Kevin McConway told MailOnline: 'An important point is that numbers of Covid deaths in France have shown very little evidence of a rise recently. There has been something of a rise in deaths Spain, but not very marked at all.'

Statisticians say expansion of testing capacity means infections are being found more easily than at the start of the pandemic. In the UK alone, the number of tests being carried out has increased by 20 per cent from the start of July to now. But the number of positive results has gone up by only 0.3 per cent in the same period, suggesting new cases are a combination of more tests, and only a slight rise in infections in hotspots.

The Office for National Statistics further suggests the UK's coronavirus outbreak has remained stable. It estimates how many people are catching the coronavirus each day, including those with symptoms, who would show up in cases data, and those without.

Today's report said the number of people catching coronavirus in England remains stable at 2,000 per day - down 200 from last Friday, when the prediction sat at 2,200.

King's College London researchers, who run an app through which almost four million people report symptoms and test results, also estimate there are 2,000 new cases per day across the whole of the UK.

Despite infections being on the rise since lockdown restrictions were lifted at the start of July, experts are sure it is not the sign a second wave.

Instead, they say the climbing figures are being caused by completely

PREV Coronavirus infection rate in England 'remains stable'
NEXT NHS enrolls 5,000 patients in mass trial of its soups and shakes diet to ...