Phase 3 trials for the coronavirus vaccine being developed by Oxford University and AstraZeneca have been placed on a hold after a 'serious adverse event' was reported in a participant in the UK.

Serious adverse events are suspected reactions to vaccines or drugs that require hospitalization, are life-threateningly or deadly.

It's unclear what the exact nature of the reaction was, but a person familiar with the matter told Stat News that the person is expected to recover.

Trial holds are not uncommon, but it is a blow to worldwide hopes for a shot to be ready in the coming months, as the AstraZeneca shot was considered by many - including the World Health Organization - to be the leading candidate worldwide.

The UK's Health Secretary Matt Hancock said earlier this week he hoped it could be rolled out in the 'first few months' of 2021.

And Australia, for example, has spent $1.7 billion (US $1.24 billion) to secure access to a supply of 84 million COVID-19 vaccines, should the clinical trial be a success. 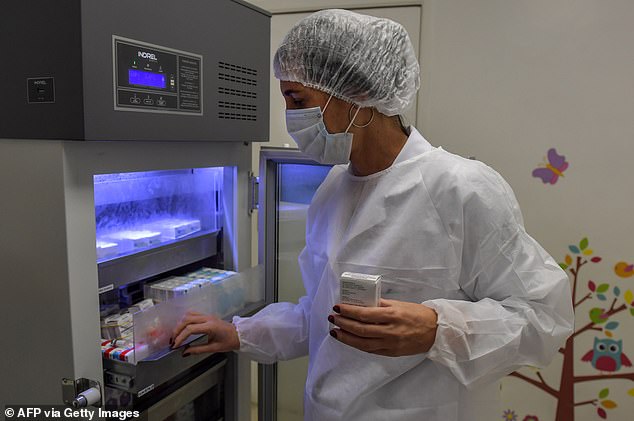 Trials for AstraZeneca's shot are underway in the US, UK, Australia, Brazil (pictured) and other nations. Phase 3 testing will now be paused while safety data is reviewed 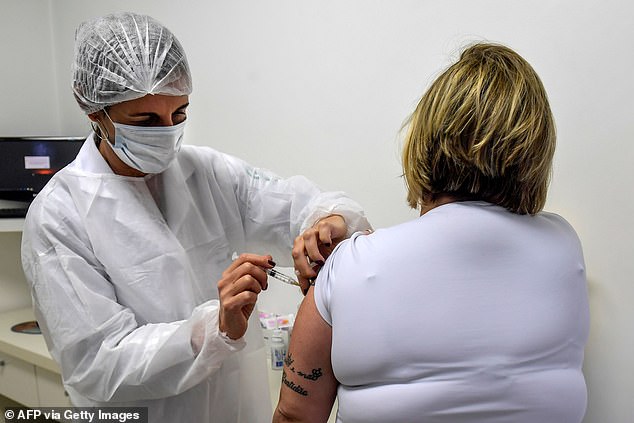 AstraZeneca's candidate vaccine, known as AZD1222, is in phase 3 trials - the final stage before safety and efficacy data can be submitted to regulators. Pictured: A Brazilian volunteer receiving the Oxford vaccine, July 24

The UK is the host of research and development efforts of the vaccine, which has been developed by researchers in Oxford and will be manufactured by AstraZeneca, a company based in Cambridge.

The British Government has ordered 100million doses of the jab and has already started manufacturing them so they're ready to go if and when clinical trials are successful. The price paid has not been disclosed.

The US Government has ordered 100million doses of the vaccine and contributed $1.2billion (£910m) to the research and development of the jab.

The European Commission has agreed a deal for 300million doses of the vaccine if its clinical trials work, with the option to buy a further 100million. The deal has been made on behalf of countries in the EU. The amount of money spent is unknown.

Australia has confirmed it ordered enough doses of the vaccine to give one to its entire population of 25million people. It is not clear how many doses the nation has ordered. The UK - with a population of 66m but an order of 100m - ordered more than it needs.

One company in China has agreed a deal with AstraZeneca to make at least 100million doses of the vaccine.

Shenzhen Kangtai Biological Products, based in the city of Shenzhen, will increase capacity to 200m per year by the end of 2021.

A Russian company, R-Pharm, also has a deal to produce and distribute the vaccine, but it is unclear how many it will make or what it will pay to AstraZeneca.

Brazilian officials have set aside $360million (£274m) for at least 100million doses of the vaccine. Brazil is currently in one of the worst Covid-19 crises in the world with more than 3.6million official cases so far and 114,000 deaths.

Development of the AstraZeneca vaccine and eight others in phase 3 trials is being closely watched in the hopes they can stem the coronavirus pandemic that has killed more than 894,000 people worldwide, including nearly 190,000 Americans, and cost tens of millions their jobs.

It comes after vaccine developers - including AstraZeneca - pledged not to cut corners on safety and efficacy testing, despite US President Trump's urgent push for the Food and Drug Administration (FDA) to give emergency approval to a vaccine ahead of the November 3 election.

'As part of the ongoing randomised, controlled global trials of the Oxford coronavirus vaccine, our standard review process was triggered and we voluntarily paused vaccination to allow review of safety data by an independent committee,' an AstraZeneca spokesperson told DailyMail.com.

'This is a routine action which has to happen whenever there is a potentially unexplained illness in one of the trials, while it is investigated, ensuring we maintain the integrity of the trials.

'In large trials, illnesses will happen by chance but must be independently reviewed to check this carefully. We are working to expedite the review of the single event to minimise any potential impact on the trial timeline. We are committed to the safety of our participants and the highest standards of conduct in our trials.'

AstraZeneca's candidate vaccine, known as AZD1222, is in phase 3 trials - the final stage before safety and efficacy data can be submitted to regulators for approval - at dozens of sites across the US, and around the world.

Along with Pfizer, and Moderna, AstraZeneca and its partner Oxford University had hoped to know whether the shot worked and was safe by year-end.

Mr Hancock said on Monday the UK's 'best-case scenario' was to get the vaccine to the most-vulnerable patients within months, a timeframe that now appears less likely to be met.

'We have got 30 million doses already contracted with AstraZeneca,' he said on UK radio station LBC.

'The best-case scenario is that happens this year. I think more likely is the early part of next year - in the first few months of next year is the most likely.

'But we've also bought vaccine ahead of it getting approved from a whole different series of international vaccines as well.'

More than 50,000 people worldwide had been taking part in 'phase 3' studies to see whether the Oxford jab can actually prevent people getting infected with Covid-19.

In these tests the vaccine is being given to tens of thousands of people in real-world environments to see if it stops them from catching Covid-19 in the community.

While trial holds to review safety data are not necessarily damning, the pause on AstraZeneca's trial may very well delay the highly-anticipated results and completion of one of the fastest vaccine development pipelines in human history. 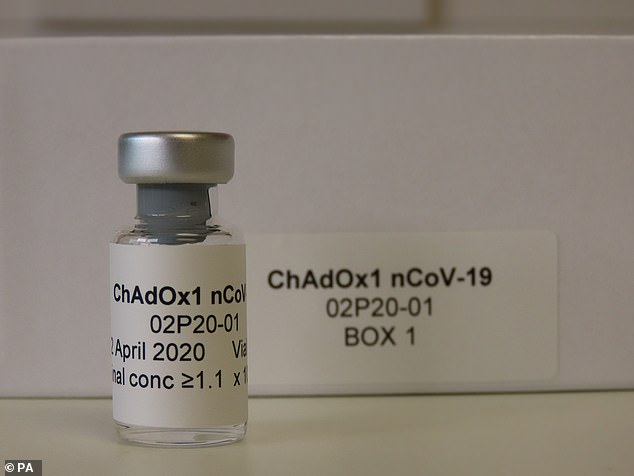 The jab was expected at the end of 2020 but its creators have had to temper expectations after community transmission began to fizzle out in Britain and stall crucial trials needed to seal its approval. It was called ChAdOx1 nCoV-19 before Oxford teamed up with AstraZeneca to manufacture it 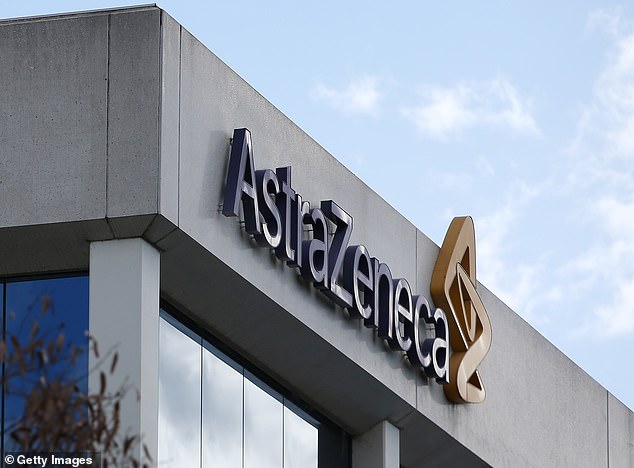 Shares for AstraZeneca plummeted by eight percent in after-hours trading

Market confidence in the pharmaceutical giant took a hit as soon as reports of the trial hold emerged.

Shares for AstraZeneca plummeted by eight percent in after-hours trading. 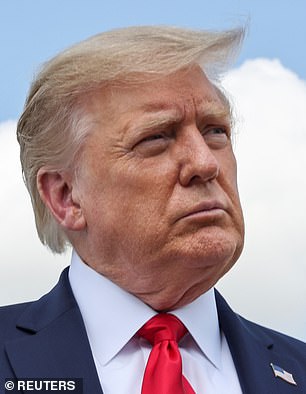 The company is in now in mitigation mode to try to stay as close to its trial completion date as possible.

AstraZeneca is 'working to expedite the review of the single event to minimize any potential impact on the trial timeline,' the spokesperson told Stat News.

Disconcerting though any signs that could suggest potential flaws in a leading vaccine for the disease that's killed nearly 190,000 Americans is, the move to pause a trial over safety concerns may be reassuring to some.

PREV Don't panic! Ten reasons there is so much less to fear from a second wave of ...
NEXT NHS enrolls 5,000 patients in mass trial of its soups and shakes diet to ...