One hospital in Manchester accounted for a third of all Covid-19 deaths in England last week, it was revealed today amid fears the life-threatening disease is spreading between wards.

Tameside General Hospital, in Ashton-under-Lyne, suffered 18 laboratory-confirmed coronavirus fatalities in the week to September 10, treble the six fatalities the week prior.

Figures from NHS England, which records all deaths in the country's hospitals, show a total of 52 victims were registered in the same week.

Some of the infected patients who died at the 500-bed Tameside General Hospital had been admitted for other illnesses before catching the coronavirus during their hospital stay, sources have claimed.

Health chiefs are now investigating the spate of deaths but the hospital insists it is a 'routine review' during the pandemic.

The NHS checked last week whether the hospital has stringent infection control, preventing the coronavirus from spreading between patients and staff. According to sources, official were satisfied.

It comes after Weston General Hospital in Somerset apologised last week after an investigation found 18 people may have died there after contracting the infection while getting treatment there in May. 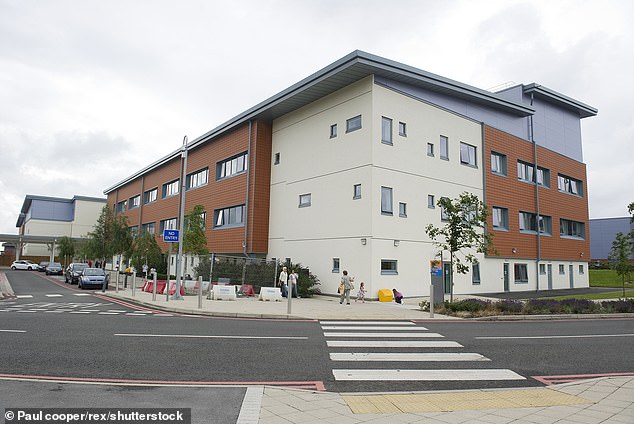 Tameside General Hospital saw a surge of Covid-19 deaths in the week to September 10, double the six fatalities the week prior 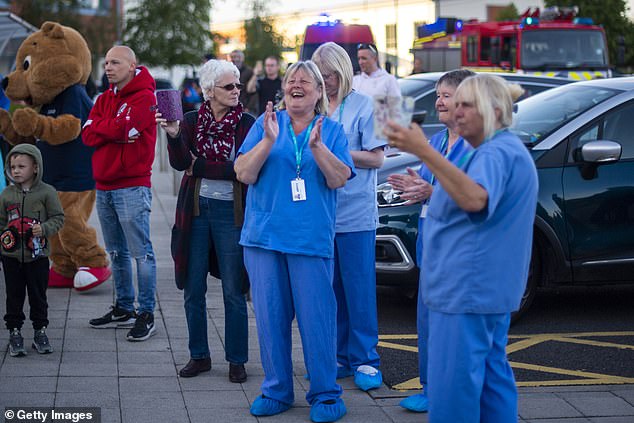 The NHS reviewed whether the hospital has stringent infection control, preventing the coronavirus from spreading between patients and staff. According to sources, official were satisfied. Pictured: Staff 'Clap for Carers' on May 14

Tameside is one of the 10 boroughs that make up Greater Manchester, which has been hit by local Covid-related restrictions.

It is currently battling one of the highest infection rates of Covid-19 in England, with 107.7 cases per 100,000 people, according to data. This is almost four times higher than the country's average (26).

Some 244 positive test results were reported in Tameside in just one week to September 12, up from 148 the week prior, suggesting the spread is not slowing.

However testing has been increasing in the area, according to Public Health England data - from 118 per 100,00 people in the week to August 30 to 154 per 100,000 in the week to September 6 - which may contribute to the higher case numbers.

Tameside General Hospital, which serves the surrounding area of Tameside and the town of Glossop in Derbyshire, experienced a dramatic spike in Covid-19 deaths last week, described by The Guardian as 'sudden and unexplained'.

NHS 'WORKING IN THE DARK' WITHOUT COVID-19 TESTS FOR STAFF

A lack of testing is contributing to staff absences across the NHS, putting services at risk, health leaders have warned.

NHS Providers, which represents NHS trust leaders, said hospitals in Bristol, Leeds and London had raised concerns over the weekend about the lack of tests available for NHS staff.

It warned that the recovery of normal NHS services was being put in jeopardy, while preparations for the winter pressures of Covid-19 and seasonal flu were being hampered.

NHS staff are having to self-isolate due an inability to get a test for themselves or family members, it said.

Testing has come under intense scrutiny after people across England reported they were unable to book tests, or were being offered tests hundreds of miles away.

NHS Providers chief executive Chris Hopson said there was a lack of detailed operational information on the shortages, such as how long they will last.

He said: 'The problem is that NHS trusts are working in the dark – they don't know why these shortages are occurring, how long they are likely to last, how geographically widespread they are likely to be and what priority will be given to healthcare workers and their families in accessing scarce tests.

'They need to know all this information so that they can plan accordingly.

'For example, trusts need to know if they should try to create or re-establish their own testing facilities as quickly as possible.'

Mr Hopson said the health service 'simply can't spare members of staff waiting for tests, not being able to come into work' and patients unable to be tested.

'There is a significant impact and a growing impact on the NHS, and that is a problem,' he added.

A further two people died of Covid-19 at Tameside hospital over the weekend.

It is currently unclear how many of the 18 Tameside patients died after catching Covid-19, while at hospital for another reason.

Well-placed NHS sources confirmed that at least some of the cases were the result of nosocomial infection – transmission within a hospital.

But hospital sources insisted that 'the majority' of the 18 people had Covid-19 before they came in, suggesting there has been an increase in admissions for the disease in Tameside as a result of rising cases.

It is understood that of the 35 new hospital admissions in Greater Manchester in the week to September 8, 10 of those were at Tameside Hospital, Manchester Evening News reported.

The number of deaths linked to the nosocomial outbreak is reportedly 'low'.

The source said: 'We test all patients who are being admitted. Some of them came back as positive [after they were tested] even though they were asymptomatic.'

'There are a few of each so far. We know that some were related to the outbreak of hospital-acquired Covid.'

All 18 are thought to have been elderly and to have had one or more underlying illnesses, and the hospital pointed out that its patients are typically of an older population. This means that if they did test positive for Covid-19, they may be noted down as a 'Covid-19 death', even if it was their existing condition or age that was the root cause.

But it raises fears of a hospital-acquired Covid-19 outbreak – one of the first documented in the UK.

An outbreak is defined by Public Health England as two or more 'laboratory confirmed cases (COVID-19, influenza or other respiratory pathogen) linked to a particular setting'.

Hospitals have to take extreme care to protect staff and patients from nosocomial infection.

Wards are full of people vulnerable to severe Covid-19 – those with underlying health conditions, the elderly and people who have had surgery and are at risk of infection.

NHS bosses say up to a fifth of Covid-19 patients in several hospitals have contracted the disease while already being treated there for another illness.

PREV Heart rate measuring can help spot depression as it beats faster, study finds
NEXT NHS enrolls 5,000 patients in mass trial of its soups and shakes diet to ...

'They are not supernatural': Lions stare down Tigers mogaznewsen