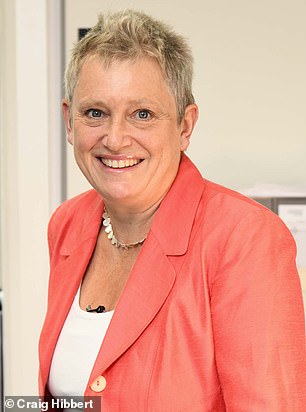 Less than half of Britain will get vaccinated against Covid-19, according to the head of the country's vaccine task-force.

Kate Bingham claimed ministers are hoping around 30million people will receive the potentially life-saving jab, out of a total of almost 67million.

She said 'we just need to vaccinate everyone at risk', revealing that no-one under the age of 18 will receive a dose. Ms Bingham told the Financial Times that vaccinating everyone was 'not going to happen'.

Care home residents and staff will be the first to get a Covid-19 vaccine when one is approved, government advice states. Everyone over the age of 80 and NHS staff will be second in line.

Ms Bingham's comments come after Matt Hancock yesterday confirmed that the military would be involved in distributing a coronavirus vaccine.

None of the jabs have yet been proven to work, and are currently in scientific trials. Experts say it is likely people will need two doses of each vaccine to be protected against the coronavirus. 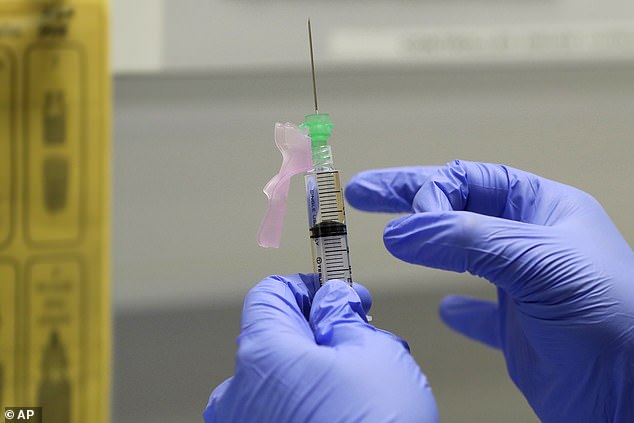 The head of the immunisation programme said 'we just need to vaccinate everyone at risk', meaning the most vulnerable, such as the elderly, will be prioritised (file photo)

Ms Bingham, who was appointed chair of the UK's Vaccine Taskforce for Covid-19 in May this year, attempted to dispel claims that everyone in the British population would be vaccinated if a jab was proven effective against the coronavirus.

It comes after months of ministers and other health officials claiming a jab could be rolled out by Christmas. The first promise was that it would be ready by September.

Ms Bingham told the Financial Times: 'People keep talking about "time to vaccinate the whole population" but that is misguided.

'There is going to be no vaccination of people under 18. It's an adult-only vaccine for people over 50 focusing on health workers and care home workers and the vulnerable.'

WHO IS PLANNED TO GET A COVID-19 VACCINE FIRST?

Updated guidance from the Joint Committee on Vaccination and Immunisation states vaccines will be rolled out in the following order:

Ms Bingham said vaccinations would be aimed at those 'most at risk'.

She added that vaccinating healthy people, who are much less likely to have severe outcomes from Covid-19, 'could cause them some freak harm', the FT claims.

It is not clear what she meant by this. But it comes after the Oxford's vaccine trials were paused earlier in September due to a serious side effect in a healthy, British woman aged 37.

Experts, including No10's Chief Scientific Advisor Sir Patrick Vallance, and the chief executive of AstraZeneca, which owns the right to the vaccine, said the event was not unusual for a large scale experimental drug trial.

It is hoped Oxford scientists will know if their jab prevents at least 50 per cent of infections, considered the threshold for success by the World Health Organization, by the end of this year.

Ms Bingham said that if any vaccine was proven to be 95 per cent effective, which is thought to be unlikely given the short time frame scientists have been working in, it may be given to a larger number of people.

Last month it was reported by the Joint Committee on Vaccination and Immunisation (JCVI) that care home residents were among those who should be at the top of the list for a jab when one becomes available.

Everyone over the age of 80 and NHS staff will be second in line, the updated government guidance stated.

The body, which consists of 20 top scientists, advises ministers on all vaccines. It admitted its guidance for any UK Covid-19 vaccination scheme is likely to change in the future.

Matt Hancock previously pledged that Britons with underlying conditions would be near the front of the queue for any jab.

But millions living with heart disease or other ailments that raise their risk of dying of Covid-19 won't be vaccinated until everyone over the age of 65 is inoculated, according to the new guidance.

The Health Secretary voiced his support for the prioritisation list at the virtual Conservative Party conference.

He described prioritisation as 'important because we've got to get the vaccine to the people who are most likely to be badly affected by coronavirus first'.

'But it is also important because people can know in advance that there is a prioritisation and we will reach people when it is clinically right to do that.

'And then there's a huge logistical operation which we're planning, led by the NHS with the support of the armed services to make sure we have the logistics in place to get this rolled out as fast as it is feasibly possible.'

Sir Patrick believes it is 'more likely' that a vaccine will be ready for the nation 'over the first half of next year'.

He claimed in a televised address to the nation on September 21 that it is 'possible' one of the dozens of experimental jabs being trialed on humans could be ready by Christmas, insisting 'good progress' was being made.

He said: 'It is possible that some vaccine could be available before the end of the year in small amounts for certain groups.'

Meanwhile, it was reported over the weekend coronavirus vaccination in the UK could be just three months away and every adult could receive a dose as soon as Easter.

The Times quoted Government sources involved in the vaccination process as saying they expect a full distribution programme to take six months or less after approval, but it could be even quicker.

Last week a Royal Society report warned there would be significant challenges in distributing and producing the vaccine on such a mass scale.

Nilay Shah, head of the department of chemical engineering at Imperial College London, and a co-author of the report, said: 'Even when the vaccine is available it doesn't mean within a month everybody is

PREV Manchester's coronavirus rate has risen FIFTEEN-fold since local lockdown came ...
NEXT Why was Donald Trump REALLY given dexamethasone to treay Covid-19?

Throwing down the gauntlet to powerbrokers mogaznewsen