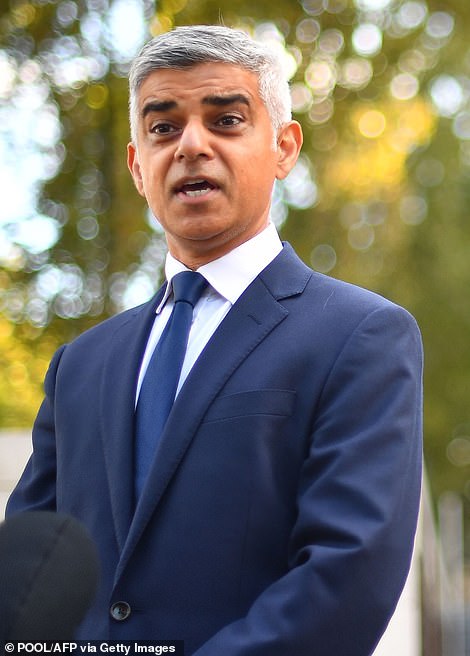 Sadiq Khan has warned Londoners' will die if the capital continues to be hit with coronavirus testing shortages amid fears a lack of swabs could be masking the true scale of the city's outbreak.

The London Mayor's sobering warning came as the number of swabs carried out in the capital dipped below the national average, despite being the most densely populated city in the country.

Testing in London was slashed from 90,000 per week in mid-August to 65,000 last month, after capacity was stripped out of the capital and reallocated to hotspots in the North of England. Testing is thought to have risen slightly in the last week, but Mr Khan argues it is still not enough to cope with the rising cases in the city.

Londoners suspected of having the disease have for weeks been unable to access swabs, with reports of some being told to travel hundreds of miles or even cross borders into the devolved nations to get checked.

The Government is struggling to cope with 200,000 swabs being processed each day and has had to start rationing who an get a test to deal with the growing demand as the virus continues to re-surge.

The volume of people needing tests is expected to surge significantly moving into winter as the flu and colds start to plague the population and cause Covid-19-like symptoms, such as a fever and continuous cough . Testing is the only tool health officials have to tell whether someone actually has the viral disease.

Mr Khan warned the capital could now be hurtling towards catastrophe as cases of coronavirus continue to spike but testing continues to plummet, potentially allowing infections to slip under the radar. He said any further decrease in testing 'risks lives with winter approaching'.

It comes amid fears London could be hit with a local lockdown, with Mr Khan warning tighter measures 'couldn't be ruled out' if the rising wave was not curbed. Public Health England has put every borough of the city on its watchlist as an area of 'concern', meaning it will be monitored closely in the coming days and weeks.

London so far seems to have been spared the worst of Britain's second wave of Covid-19, with northern cities like Manchester and Liverpool bearing the brunt of the second wave of the pandemic. London's infection rate stands at 33.6 per 100,000, on average — a figure which has risen 28 per cent in a week but pales in comparison to Manchester's 530 or Liverpool's 300.

But statistics signal the capital city — home to around 9million people — is trending in the wrong direction, with infections doubling in a fortnight and cases soaring in all but one borough. However, hospital admission data is looking less bleak. There are just 34 admissions per day on average – down from an average 39 on September 25 and just 4.5 per cent of the level seen at the peak of the crisis in April. 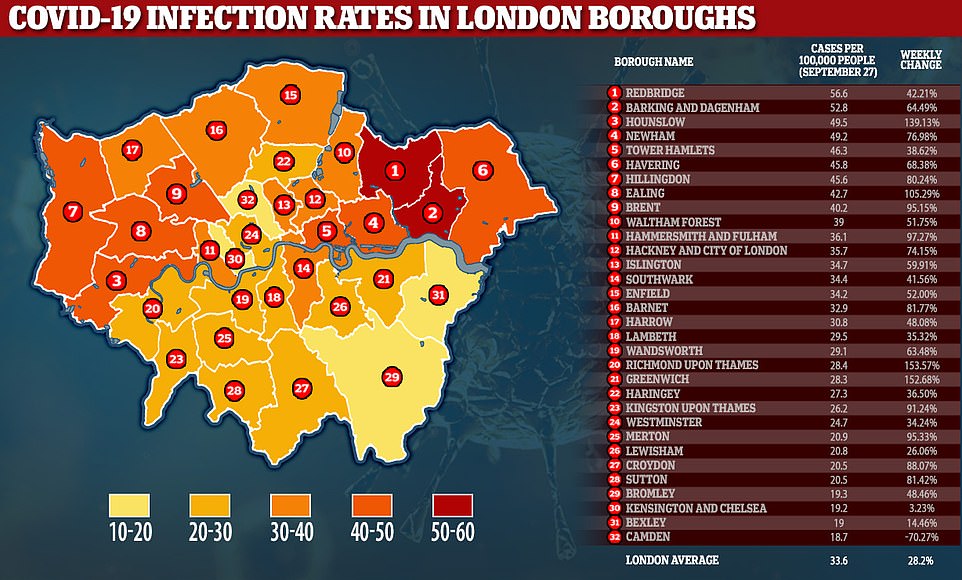 Coronavirus cases rose in all boroughs of London except Camden in the last week of September, according to Public Health England data, but none have a rate higher than the England average (56.9 positive tests per 100,000 people) 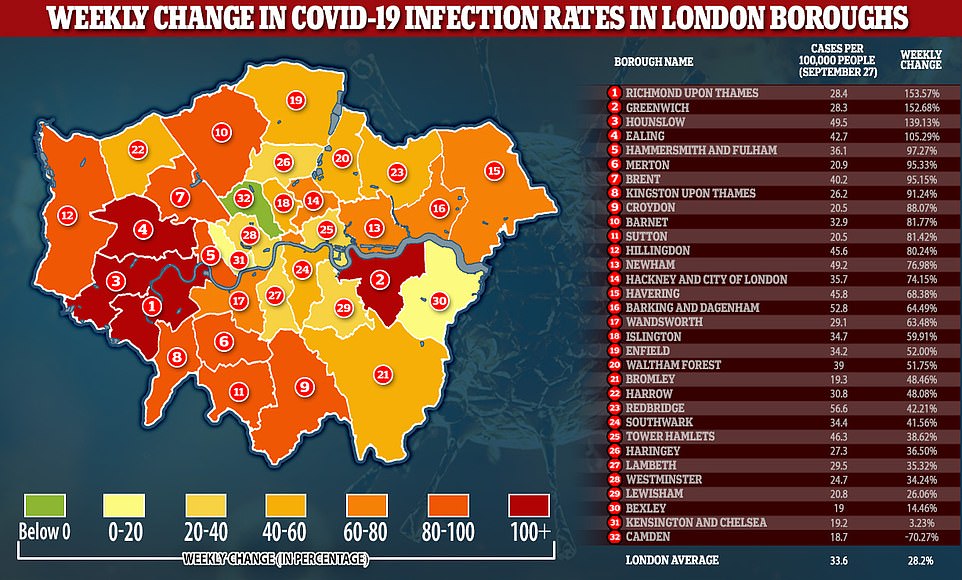 Public Health England data shows how the weekly infection rate — the amount of Covid-19 cases diagnosed per 100,000 people in a week — is rising quickest in Richmond upon Thames, rising by 153.6 per cent in a week. It has dropped in Camden by around 70 per cent

Mr Khan told The Evening Standard: 'Testing capacity was taken away from London last month and is currently below the England average of 150 people tested per 100,000 per day.

'Given London's size, population and complexity there is a strong argument for testing to be significantly above national levels to control the virus effectively.

'It beggars belief that six months into this crisis, the Government still does not have a grip on one of the fundamental ways to control the spread.'

In a clear warning shot at officials, he added: 'Any further failure to increase testing across the capital risks lives with winter approaching.'

Signs are emerging that the virus is rebounding in London, with some boroughs seeing the ratio of positive tests per 100,000 people more than double in seven days.

Covid outbreak at St Helier Hospital: Visits are restricted and ambulances diverted to nearby A&Es after six patients test positive over weekend

A London hospital went into partial lockdown yesterday while staff battled an Covid-19 outbreak that has infected seriously-ill patients in its intensive care unit and on a renal ward.

The infections were found over the weekend and a major investigation has been launched into how the infection got into patients being treated for other illnesses.

It is believed six patients were infected but there is concern the virus got into the intensive care unit which houses the most sick patients.

A hospital source said: 'Infection control in intensive care is very strict. It's very concerning that people fighting for their life already have become infected.'

The Government has been under pressure for months to introduce routine weekly testing of hospital staff for coronavirus.

Last week the House of Commons Health Committee added its weight to the call for regular testing to protect patients.

Covid infections have hit several other hospitals in recent weeks with the finger being pointed at staff spreading the virus.

It is believed hundreds of patients have died during the pandemic from hospital acquired Covid passed on by staff.

A spokesman for Epsom and St Helier NHS Trust said: 'A small number of patients have tested positive for COVID-19 during admission to the Renal

PREV Matt Hancock warns cancer patients may not be treated if Covid-19 is 'out of ...
NEXT Cancer-stricken Public Health England official slams ban on assisted dying