More than a million Britons with the most common sleep disorder could soon be diagnosed within days without leaving home – thanks to a stick-on sensor sent to them in the post.

The pebble-like device sticks to the neck and detects breathing patterns associated with sleep apnoea, which affects roughly 1.5 million Britons.

Currently, patients referred for monitoring in a hospital sleep clinic wait up to eight months for investigations before they are diagnosed.

If left untreated, the condition, in which heavy snoring disrupts breathing, increases the risk of high blood pressure and heart disease. Now, a device called AcuPebble can reduce diagnosis time to a couple of days. 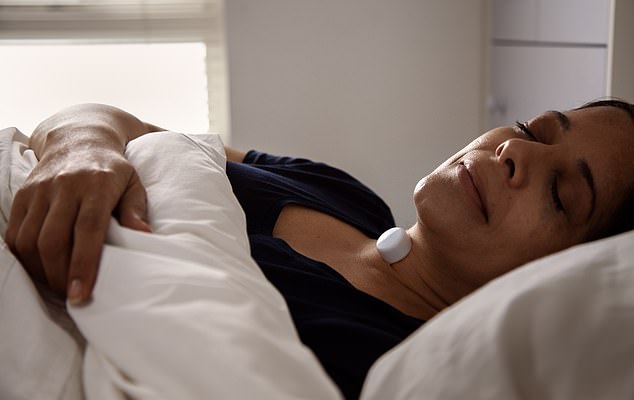 Sleeping partner: The AcuPebble on the neck records heart and lung vibrations and transmits data to an app, detecting breathing patterns associated with sleep apnoea

...between sepsis and septicaemia?

The terms are similar in that they both mean life-threatening illness as a result of infection. But they describe slightly different parts of the process.

Septicaemia simply means the presence of bacteria in the bloodstream causing an infection. It’s often called blood poisoning and features symptoms such as chills, fever and rapid heart rate or breathing.

Sepsis is the immune system’s extreme reaction to that blood poisoning.

When it detects the bacteria in the blood, it pumps out large numbers of chemical messengers that trigger inflammation throughout the body, punching holes in healthy blood vessels, causing blood clots to form and – in the worst cases – leading to fatal organ failure.

It works by recording the sounds and vibrations generated by the lungs and heart while the patient sleeps. The data is wirelessly transmitted to an app on the patient’s smartphone, which shares the results with his or her doctor.

NHS doctors trialling the device at the Royal Free Hospital in London say the results of a study involving 200 patients show it is just as effective as existing testing techniques.

‘It means we can diagnose more patients more quickly and reduce visits to a hospital,’ says Dr Swapna Mandal, sleep apnoea specialist at the Royal Free.

Muscles in the airways naturally relax as we fall asleep. But those with sleep apnoea suffer a complete collapse of the muscles in the upper windpipe, which can temporarily interrupt breathing.

Those with the condition will often make choking, gasping and snorting noises, and frequently wake up – sometimes as often as every few minutes.

The disruption in breathing leads spikes in blood pressure,

PREV Why are diabetics STILL not given the gadget that frees them from finger prick ...
NEXT Cold water swimming may help defend the brain from dementia, scientists say