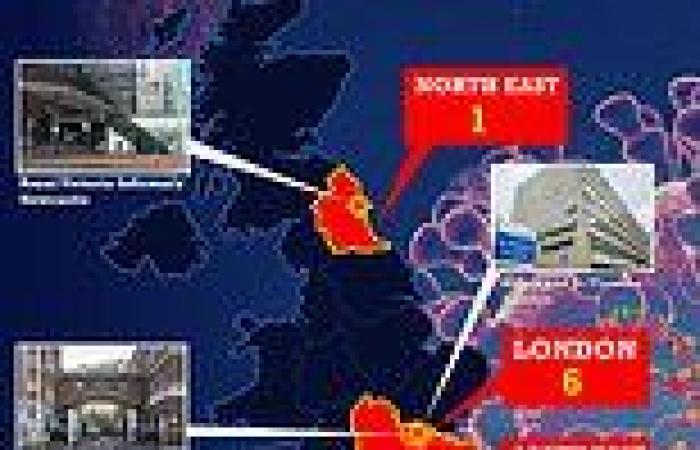 Monkeypox contact tracers are probing gay bars and spas as they scramble to contain an outbreak of the rare disease.

Health chiefs in the UK are 'actively investigating' venues visited by six homosexual and bisexual men who tested positive in the past week.

They include bars, clubs and saunas, according to an update by the World Health Organization (WHO).

Six of Britain's nine confirmed cases are men who have sex with men, which officials say is 'highly suggestive of spread in sexual networks'.

A similar pattern has emerged in Europe, where seven gay or bisexual men tested positive in Spain and nine 'mostly young' males in Portugal.

The UK Health Security Agency (UKHSA) has today issued a direct plea to men to be vigilant for new rashes on their face or genitals.

Experts fear the known cases are the tip of the iceberg, with the majority of patients not linked to each other, suggesting it is spreading more widely. 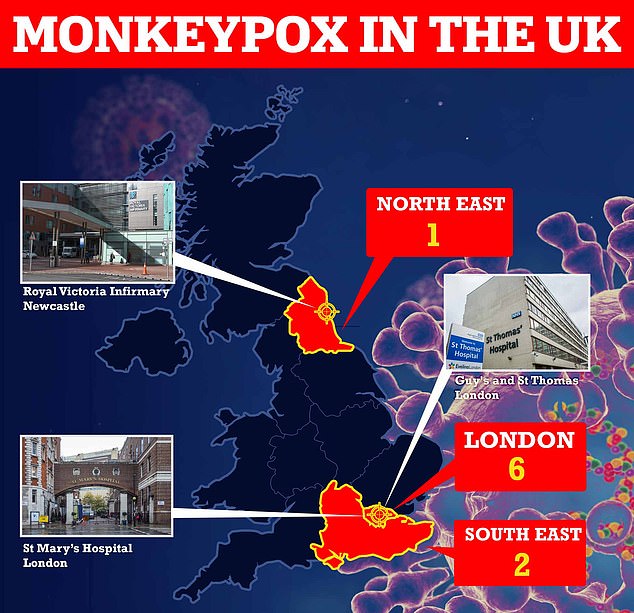 Nine Britons have been diagnosed with monkeypox and all but one of them appear to have contracted it in the UK. The original UK patient had brought the virus back from Nigeria, where the disease is widespread. At least three patients are receiving care at specialist NHS units in London and Newcastle 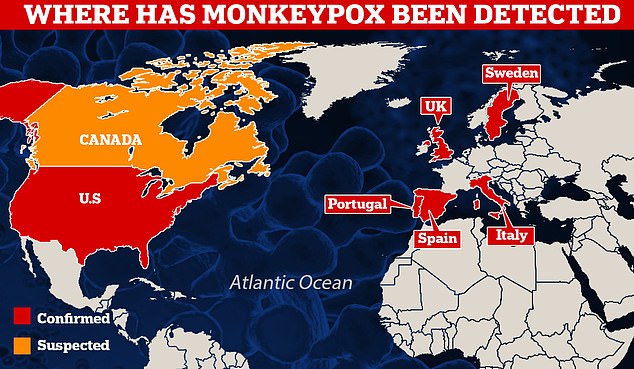 Seven countries outside of Africa have confirmed or suspected cases of monkeypox. Patients with confirmed monkeypox have been recorded in the UK, US, Spain, Sweden, Italy and Portugal, while Canada is probing potential cases

The WHO released an update on monkeypox last night that included a section on the situation in the UK.

It came before two more cases in gay or bisexual British men were announced.

The WHO said: 'Health authorities in the UK have established an incident management team to coordinate the extensive contact tracing which is currently underway in health care settings and the community for those who have had contact with the confirmed cases.

MONKEYPOX: Strain 'spreads sexually' and is as deadly as the original Wuhan Covid variant - but a jab exists

Monkeypox is a rare viral infection which people usually pick up in the tropical areas of west and central Africa.

It is usually spread through direct contact with animals such as squirrels, which are known to harbour the virus.

However, it can also be transmitted through very close contact with an infected person.

Monkeypox was first discovered when an outbreak of a pox-like disease occurred in monkeys kept for research in 1958.

The first human case was recorded in 1970 in the Democratic Republic of Congo and the infection has been reported in a number of central and western African countries since then.

Only a handful of cases have been reported outside of Africa until now and they were confined to people with travel links to the continent.

Monkeypox is usually mild, with most patients recovering within a few weeks without treatment. Yet, the disease can prove fatal.

However it can kill up to 10 per cent of people it infects.

The milder strain causing the current outbreak kills one in 100 — similar to when Covid first hit.

Monkeypox shuts down some aspects of your body's ability to fight infections.

Because of the presence of other viruses and bacteria which your body can't fight off, in the worst cases patients can succumb to a lethal shock throughout the body and blood poisoning.

Death is more likely to occur in younger patients. The skin lesions are painful and disfiguring, and can be the source of further infections.

Is there a cure?

Because monkeypox is closely related to the virus that causes smallpox, jabs for smallpox can also protect people from getting monkeypox.

One vaccine, Imvanex, was shown to be around 85 per cent effective in preventing monkeypox infection.

Antivirals and pooled blood from individuals vaccinated against smallpox can be used to treat severe cases.

How does it spread?

Monkeypox is not a sexually transmitted infection by nature, though it can be passed on by direct contact during sex.

Contagious lesions, through which infections are most likely to be passed on, can appear on any part of the body.

The infection can also be passed on through contact with clothing or linens used by an infected person.

Until now, monkeypox had only ever been detected in four countries outside of Africa - the UK, US, Israel and Singapore.

And all of those cases had travel links to Nigeria and Ghana.

Are gay men at greater risk?

Most of the British and Spanish cases are gay or bisexual men, which officials say is 'highly suggestive of spread in sexual networks'.

The sexuality of patients in other countries has not been disclosed.

Health chiefs in the UK have issued a direct plea to men who have sex with men, telling them to come forward if they develop a rash on their face or genitals.

But its most unusual feature is a rash that often begins on the face, then spreads to other parts of the body, commonly the genitals, hands or feet.

The rash changes and goes through different stages before finally forming a scab, which later falls off.

What do I do if I have symptoms?

Anyone worried that they could be infected with monkeypox is advised to make contact with clinics ahead of their visit.

Health chiefs say their call or discussion will be treated sensitively and confidentially.

'Contacts are being assessed based on their level of exposure and followed up through active or passive surveillance for 21 days from the date of last exposure to a case. Vaccination is being offered to higher risk contacts.

'A detailed backwards contact tracing investigation is also being carried out to determine the likely route of acquisition and establish whether there are any further chains of transmission within the UK for all cases.

'Sexual contacts and venues visited (for example saunas, bars and clubs) are actively being investigated for the four GBMSM [gay, bisexual and men who have sex with men] cases.'

The UKHSA has said it is 'particularly urging men who are gay and bisexual to be aware of any unusual rashes or lesions and to contact a sexual health service without delay if they have concerns'.

Meanwhile, Italy and Sweden have become the latest countries to record cases of monkeypox.

The Italian patient tested positive at a hospital in Rome after returning from the Canary Islands and the Swede was diagnosed in Stockholm.

No further details have been given. It brings the number of countries outside of Africa with confirmed or suspected cases to seven.

Patients with confirmed monkeypox have also been recorded in the US, Spain and Portugal, while Canada is probing potential cases.

The outbreak has been described as 'unusual' by experts because person-to-person transmission of monkeypox was thought to be extremely rare.

Until now the virus had only ever been detected in four countries outside of western or central Africa, and all of the cases had direct travel links to the continent.

'One person in the Stockholm region has been confirmed to be infected with monkeypox,' Sweden's Public Health Agency said in a statement.

The infected person 'is not seriously ill, but has been given care,' according to the agency.

'We still don't know where the person was infected. An investigation is currently underway,' Klara Sonden, an infectious disease doctor and investigator at the agency, said in a statement.

The health authority is now 'investigating with the regional infection control centres whether there are more cases in Sweden,' it said.

Italy's patient was holidaying in the Canary Islands and is now in isolation at the Spallanzani hospital in Rome, the hospital said.

Another two other suspected cases are being monitored, it added.

The WHO has warned it expects more cases in more countries in the coming weeks.

Six of the UK's nine cases are based in London, with two in the South East of England and one in the North East.

All but one of the UK patients — the first, who flew in from Nigeria — appear to have got infected in the UK, and most are not connected.

The US reported its first monkeypox case overnight, in a man from Massachusetts who had recently returned from Canada.

At least thirteen probable cases are being investigated in Canada, with tests being carried out to confirm the virus.

Seven people have been diagnosed in Spain and dozens more are being monitored and tested for the disease. Portugal said nine cases have been 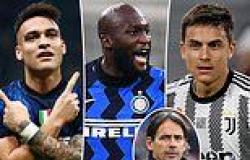 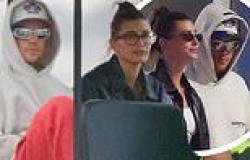 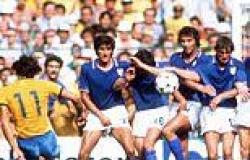 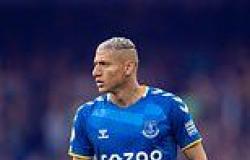 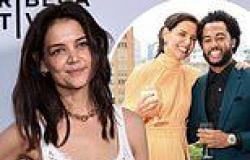 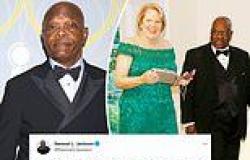