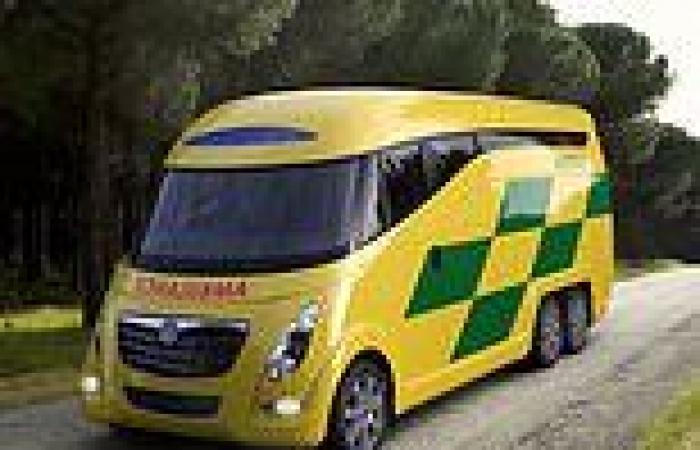 An electric ambulance which uses Formula 1 technology and is fitted with X-ray machines could be coming to a hospital near you.

The sleek six-wheeler Integro-E can go twice as fast as the NHS' current fleet of vans and is kitted out with all of the medical gear needed to 'bring the hospital to patients'.

There has been a drive in the NHS towards more eco-friendly vehicles in the past decade with the health bosses insisting on making the health service carbon neutral by 2045.

With traditional box-based vans now out of favour, trusts have no other option but to buy van conversions, which are more eco-friendly because they are more fuel efficient or are electric. But they are often criticised for being too small and too basic.

International Ambulances, a Norfolk-based firm, believes its Integro-E is the future of NHS emergency services and could be rolled out as soon as next year, if it passes health service tests.

More akin to a futuristic bus than a traditional ambulance, it has an on-board X-ray and ultrasound system, which its manufacturers think could help with current crisis in A&E, by diagnosing patients on-site and prioritising who needs to be admitted.

In terms of efficiency, it can get 10 times more miles out of the same amount of charge as the electric ambulances on the NHS's current fleet

But its hefty £300,000 price tag means commissioners could baulk at the prospect of having to pay twice as much as the £150,000 they pay for the current Fiats. 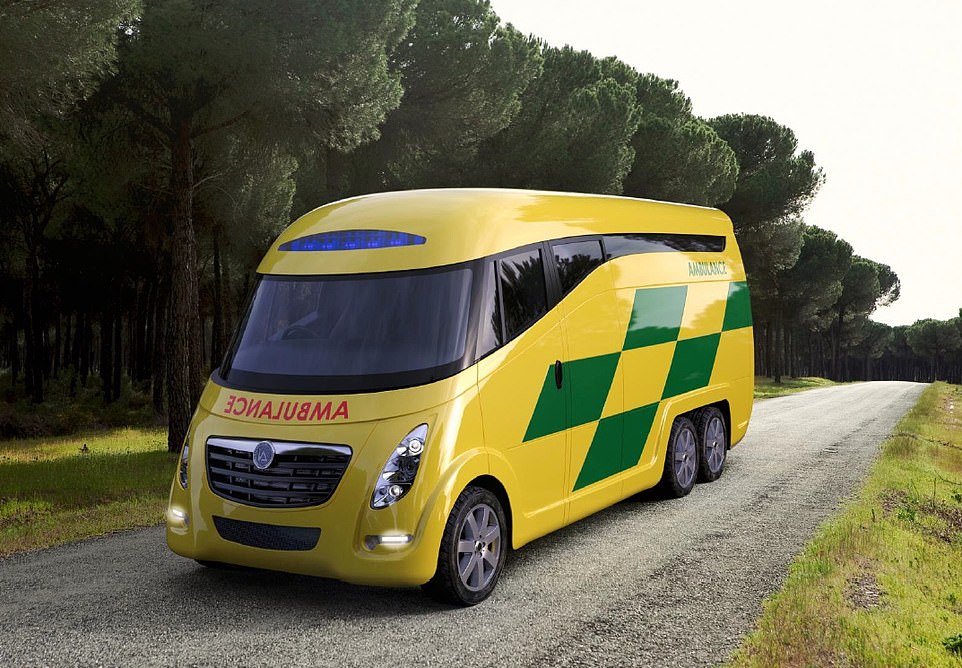 International Ambulances, a Norfolk-based emergency service vehicle manufacturing firm, believes its Integro-E is the future of NHS emergency services and could be rolled out as soon as next year, if it passes health service tests. Pictured: The Integro-E concept drawing 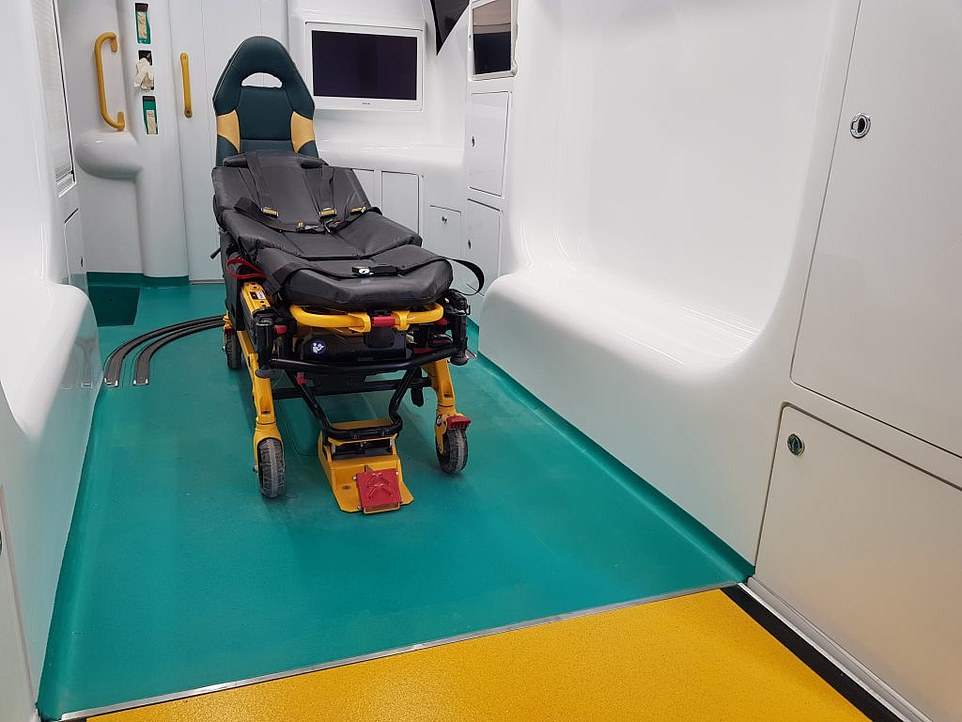 The roomy, 6ft 9 interiors (pictured) are tall enough to allow patients and paramedics to stand up inside and they have a sky ceiling to calm patients suffering with psychosis 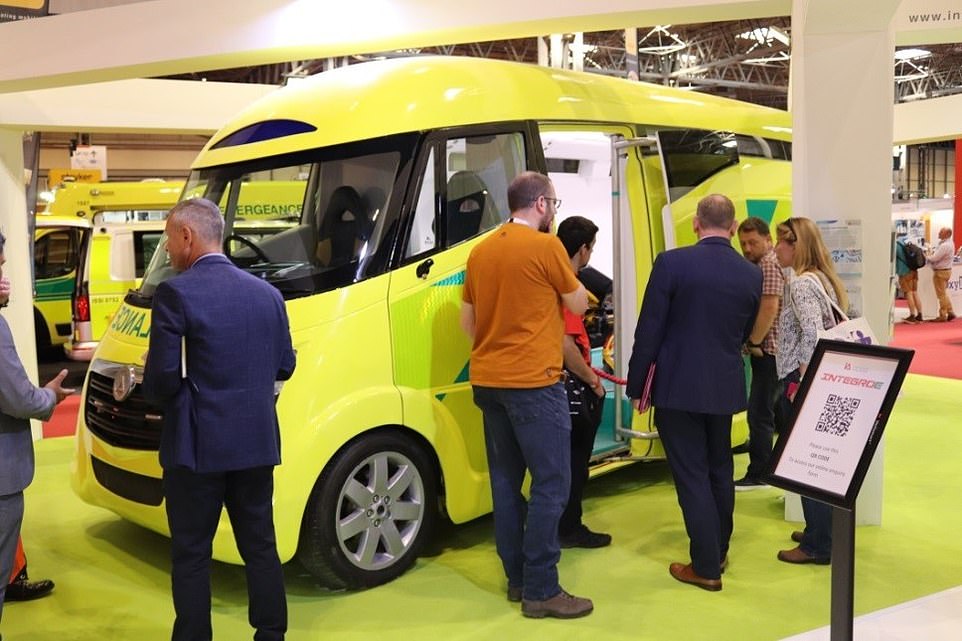 Although it is yet to actually put its electric vehicles on the road, its first is due to be rolled out in July. Pictured: The Integro-E being shown at the Emergency Services Show at the NEC in Birmingham on September 7 last year

The Integro-E was first shown at the Emergency Services Show at the NEC in Birmingham on September 7 last year and the final version will be paraded to NHS trusts at the Ambulance Leadership Forum in Hinckley, Leicestershire, from September 6 to 7 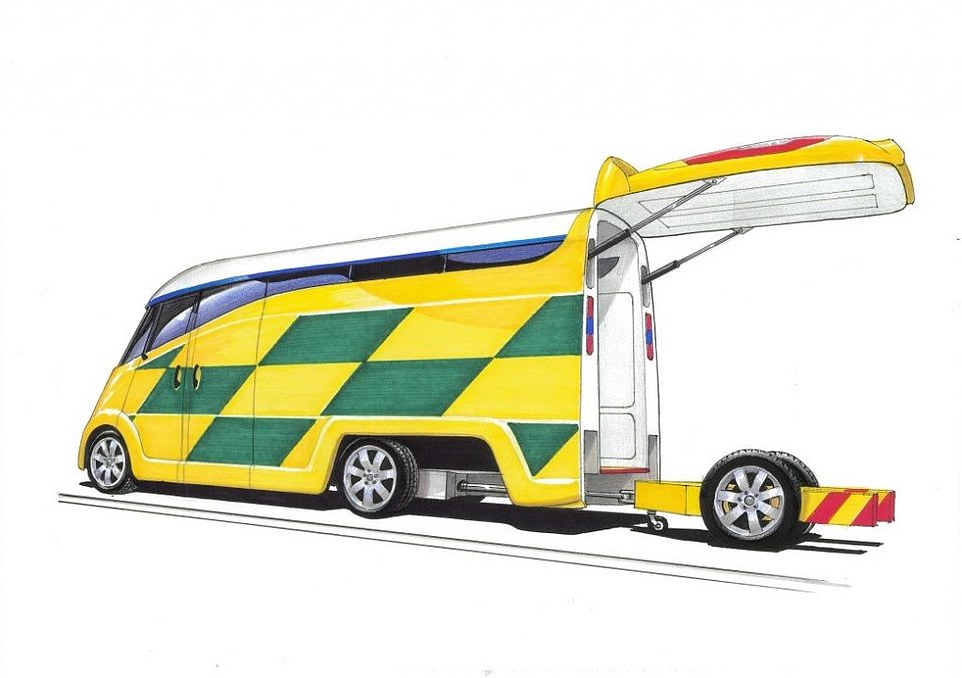 A second battery, carrying an extra 250 miles, is housed in a detachable trailer (pictured) that can be switched over within four minutes, allowing ambulances to stay on the road for a whole 12-hour shift 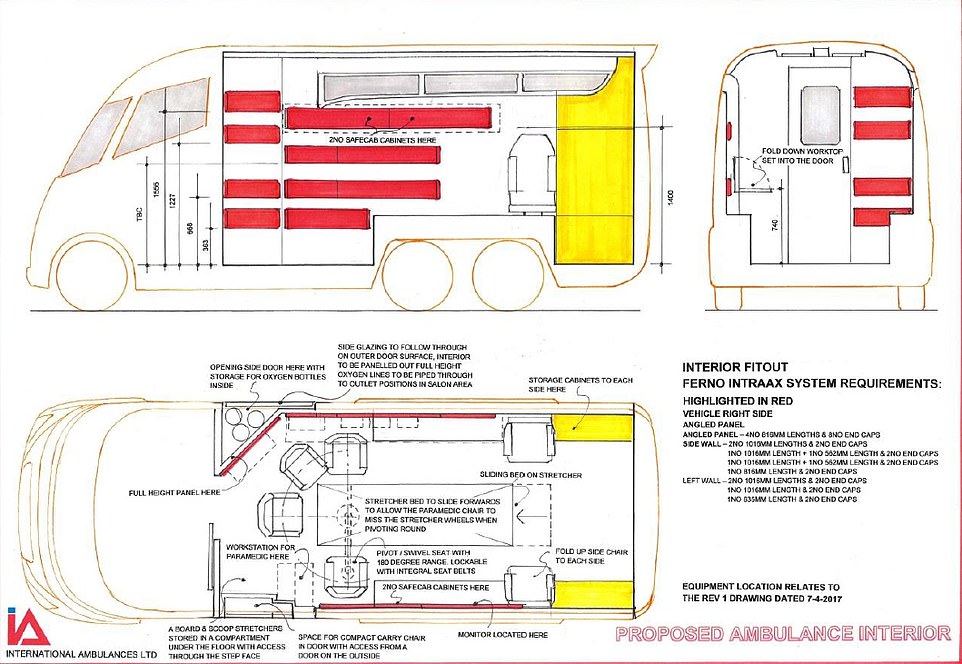 As well as being able to travel at 99mph — dwarfing the ability of most current vehicles, which can't surpass 62mph — it is much bigger. Pictured: The blueprints for the Integro-E's interior

NHS ambulance drivers may have been sacked for being 'too tall or too small' for eco-friendlier vans, union bosses have claimed.

South East Coast Ambulance Service, which covers 4.5million patients in Surrey, Sussex and Kent, wanted its entire fleet to be made up of converted Fiat vans.

An NHS-commissioned review claimed the conversions are cheaper and better for the environment than the traditional dual-crewed 'box' vehicles.

The service's own risk assessment ruled the conversions, due to how the seats and seatbelts are fitted, were unsafe for 10 per cent of its current staff because of their height. No actual heights were specified.

Trade union GMB claimed the 'bizarre' move, now officially on hold following huge backlash, could have effectively seen 'experienced staff forced out of the service' or redeployed at a time when the service is in crisis mode.

'The investment in the training and development of 10 per cent of staff could have been thrown away due to their body shape.

'There has never been a minimum or maximum height requirement to work in the ambulance service. Skills and professionalism have always been the criteria to work in this service.

'Furthermore, SECAMB did not consider how their proposals would have affected future recruitment policy nor the impact that such a change would have on their stated policy on promoting inclusivity and diversity in the workforce.

'The proposal also had the distinct possibility that long term experienced staff could have been forced out of the service for the bizarre reason that they are either too small or too tall.'

International Ambulances' first working Integro-E is set to be debuted towards the end of July before being displayed at the Ambulance Leadership Forum from September 6 to 7 in Hinckley Island, Leicestershire.

It will then be tested against its main rivals by NHS England at the Millbrook Proving Ground in Bedfordshire at the end of the year, where health service bosses will decide whether it meets the national specification.

Ambulance trusts across the country will then be able to commission it, if it is given approval.

England's NHS ambulance fleet consists of more than 5,000 vehicles, which can travel up to 50,000 miles each year.

There is no set standard for ambulances in the NHS, meaning there can be huge disparities in quality across regions.

They cost around £150,000 when bought new, with some vehicles in the fleet being up to seven years old at some trusts.

International Ambulances say fuel savings, reliability and the cost of land required for vehicle charging for the Integro-E mean their cost is comparable if not reduced. 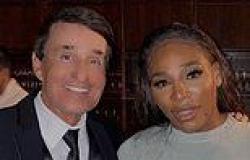