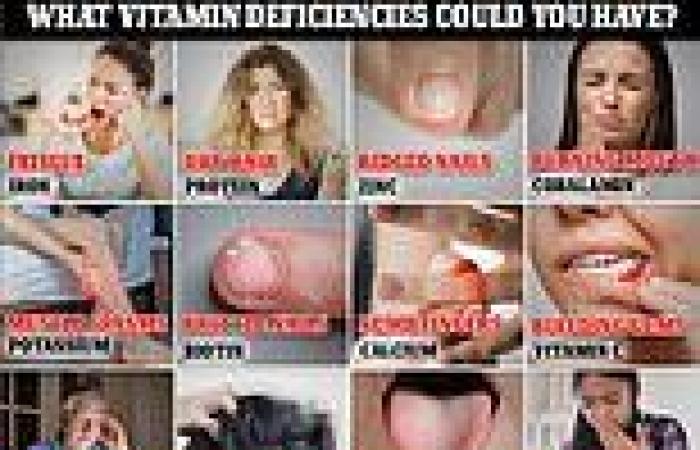 More than nine in 10 Americans suffer from at least one nutrient deficiency thanks to modern diets and sedentary lifestyles.

Yet most of us are entirely unaware, even though our bodies are screaming out for more iron, zinc, vitamin b12 and other essential vitamins and minerals.

Doctors say it is because the symptoms can be easily overlooked or linked to other, more innocuous, health problems.

Constant fatigue may easily be dismissed as having poor sleep or a busy schedule, but in many cases it results from insufficient iron.

The metal is key to ensuring oxygen-rich blood flows around the body; without it, a person could find themselves out of breath.

And if your gums bleed often, it might be a lack of vitamin C rather than a dental issue. A poor diet could even cause brittle or damaged fingernails.

So use DailyMail.com's guide to help spot hidden deficiencies: 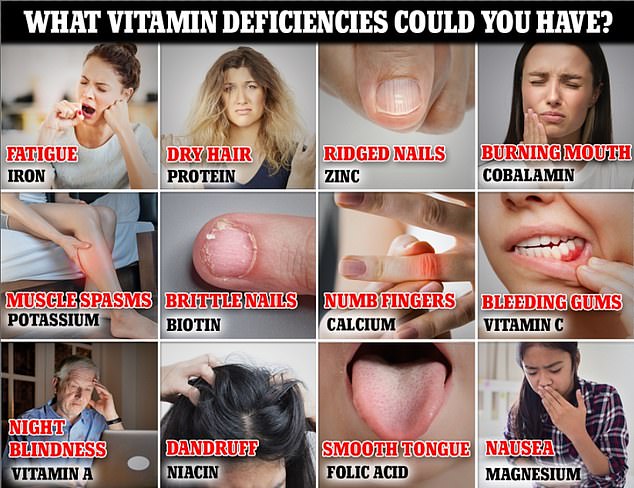 Fatigue is a symptom of many common ailments, described by doctors as one of, if not the, most frequent complaints across all fields of medicine.

It is so common because of how prevalent iron deficiency is in the population, a Japanese research team speculated in 2017.

Iron is a crucial mineral for the body's creation of hemoglobin - a substance in the blood that carries oxygen. An iron-deficient person may feel tired because their body is not circulating enough oxygen through the blood.

In severe cases, iron deficiency can lead to a diagnosis of anemia - where the body's tissue lacks oxygen because of a shortage of healthy red blood cells.

The American Red Cross recommends iron-rich foods such as beef, lamb, chicken, spinach, broccoli, strawberries and watermelon - among many others - as additions to a diet that boosts iron intake.

Shedding white flakes from your hair can not only be embarrassing - but also ruin your black outfit.

Dandruff is a condition where the skin on the top of a person's scalp becomes dry and scaly - causing it to flake.

Causes of dandruff are similar to those of dry hair. Niacin's boost to blood circulation to the scalp can prevent dryness, along with vitamin b6, pyridoxine, which supports the breakdown of protein and boosts brain health.

Zinc can keep skin cells on the scalp fresh and healthy, preventing shedding.

Pyridoxine is in fish, poultry and chickpeas. Zinc is common in meats, nuts, seeds and many vegetables.

Dry hair can often lead to temporary hair loss, which can devastate self-esteem and other health issues.

But, iron and protein are not the only critical components to maintaining a healthy hair due.

Vitamin b3, known as niacin, facilitates blood circulation to the scalp - which keeps hair strong and healthy. Vitamin b7, called biotin, has also been linked to hair health - as it supports keratin production in the body.

People hoping to boost their intake of both vitamins and stop hair loss should eat nuts, seeds and fish - excellent sources of niacin and biotin.

A variety of issues in the circulatory system can cause an irregular heartbeat. But dietary causes are often overlooked.

Calcium is crucial to the circulation of blood in the body, and helps regulate electrical signals that cause the heart to beat.

Deficiencies in calcium can harm the body's ability to pump blood, leading to an occasional irregular heartbeat.

Not getting enough sun can leave your body brittle.

Vitamin D, which is absorbed through the skin from the sun, deficiency is linked to osteomalacia - a condition where the body's bones weaken.

This is because vitamin D is crucial to the body's process for absorbing calcium - the building block of the body's skeleton.

Italian researchers in 2021 wrote that links between poor sun exposure and brittle bones had gone back as far as the 17th century.

People who suffer from weak bones will often experience weakness, and pain in the bones and joints and are more likely to suffer fractures.

A few chicken breasts could be the answer for pesky dry hair.

A few different factors can cause fuzzy, straw-like and brittle hair, but doctors warn poor iron and protein levels are one of them.

Like the causes of fatigue, dry hair can result from insufficient oxygen making its way around the body because of a shortage of iron.

Protein is a crucial part of hair health too. Hair is made of a protein called keratin, and a person who lacks it in their diet will have trouble maintaining a healthy head of hair.

Meats like chicken, beef and lamb are excellent sources of both protein and iron.

Too much pink in the sink is often associated with dental diseases - but nutritionists also warn it can signal a problem in your diet.

Vitamin C, most associated with oranges and citrus fruits but also found in broccoli, peppers and tomatoes, is an integral part of the body's healing process and supports the growth of blood vessels, muscles and other tissue.

When a person lacks vitamin C, their body has trouble repairing damage caused by toxins in the air like cigarette smoke. When the body cannon repair this damage quickly, it could lead to bleeding.

In the most serious cases, a person suffering from a severe vitamin C deficiency can experience tooth loss or scurvy - an ancient disease most notably suffered by 18th-century pirates.

While humans do not quite have the eye-sight of cats - not being able to see at all in the dark could be a sign of a nutrient deficiency.

Night blindness is a condition where a person has trouble seeing in rooms that are not well-lit. This can include not being able to properly watch a movie in a theatre.

The condition occurs when a person's eyes do not properly adjust to changes in environmental light.

It can be caused by a shortage of rhodopsin being manufactured by the eye - a process in which vitamin A is crucial too.

The protein is vital to controlling the eye's sensitivity in light and allows it to adjust itself in low-light environments. Without it, a person's eyes can lose some function when the lights are dimmed.

Vitamin A is prevalent in leafy green vegetables, peppers, fish and dairy products.

Hypocalcemia, also known as a severe calcium deficiency, can cause a person to feel a numb, tingling sensation in their fingers.

This is because calcium in the blood is crucial to nerve health. When a person suffers from dangerously low calcium levels, their periphery nerves may start to lose some function.

While it is often caused by just a lack of calcium in the diet, which can be fixed by adding more dairy, not getting enough vitamin D can lead to hypocalcemia