'Anything is possible': Tyson Fury reveals incredible picture of himself at 28 STONE during his time away from the ring before he shed the weight to make his boxing comeback Tyson Fury has unearthed a never-before-seen picture of himself at 28 stone The Gypsy King went on to lose 10 stone to making his return to the ring Fury's weight ballooned while away from boxing as he struggled with depression However, Fury has used the incredible photo as a source of inspiration for fans

Tyson Fury has unearthed an incredible picture of himself where he weighed a whopping 28 stone, before he went on to ditch the weight to make his return to boxing.

The photo, which hasn't been shared before, was taken during his time away from the ring – a dark period in Fury's life where he struggled with depression.

Fury also opened up on his battles with eating and drinking, which saw his weight balloon to over 400lbs. 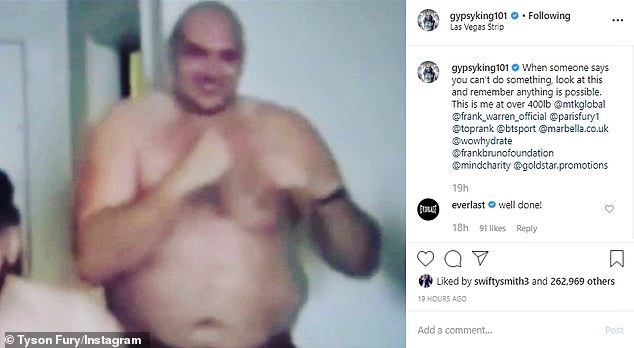 The 31-year-old even claimed to have drank 100 pints a week before his comeback.

But now, the self-proclaimed Gypsy King, who lost over a jaw-dropping 10 stone to return to the ring, is reminding his supporters that their goals can be achieved if you put your mind to it.

He said: 'When someone says you can't do something, look at this and remember anything is possible. This is me at over 400lb.'