EXCLUSIVE: Controversial new handball rules to be reviewed next month after proving to a be a major bone of contention with Premier League managers and players Football's rule-makers will review the new handball rules next month The controversial rules have proved to be a major bone of contention    The rules most recently caused a stir when West Ham had a late goal chalked off

The controversial new handball rules will be reviewed by football's rule-makers next month, Sportsmail understands.

The current laws were introduced at the start of the season after the International Football Association Board (IFAB) confirmed the alterations last March.

The revamped regulations have proved a major bone of contention with managers and players this season. 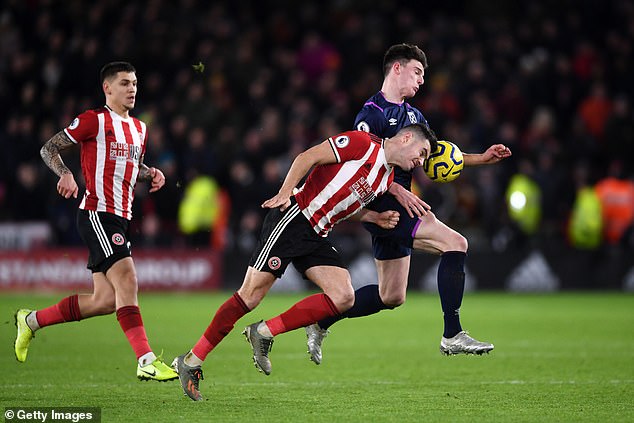 And it is understood the Professional Game Match Officials Ltd (PGMOL) chiefs expect the new handball laws to be discussed by IFAB, the body that determines the laws of the game, in February.

The new rules have caused controversy this season, most recently last Friday when West Ham were denied a late equaliser against Sheffield United.

Robert Snodgrass' effort was referred to VAR, and eventually ruled out, after replays showed that the ball had been headed against Declan Rice's arm from point-blank range by Blades defender John Egan in the build up.