'It's not as serious as what we thought. It's not a hamstring': Brendan Rodgers 'hopeful' Jamie Vardy can play in Leicester's Carabao Cup semi-final against Aston Villa after suffering injury scare during win over West Ham Jamie Vardy damaged a glute during Leicester's midweek win over West Ham The 33-year-old will not play a part in their FA Cup tie at Brentford on Saturday However, he could feature in Tuesday's Carabao Cup semi-final second leg Leicester go into the clash with Aston Villa with the scoreline 1-1 from the first leg

Brendan Rodgers believes Jamie Vardy could be back in time for Leicester's winner-takes-all Carabao Cup semi-final against Aston Villa on Tuesday.

Vardy damaged a glute during the 4-1 win over West Ham on Wednesday and will not feature in Saturday's FA Cup fourth-round tie at Brentford - though he would not have played even if fit with Leicester certain to rotate.

Yet Rodgers refused to rule out Vardy being involved at Villa Park, with the winner guaranteed to advance to Wembley after a 1-1 draw in the first leg. 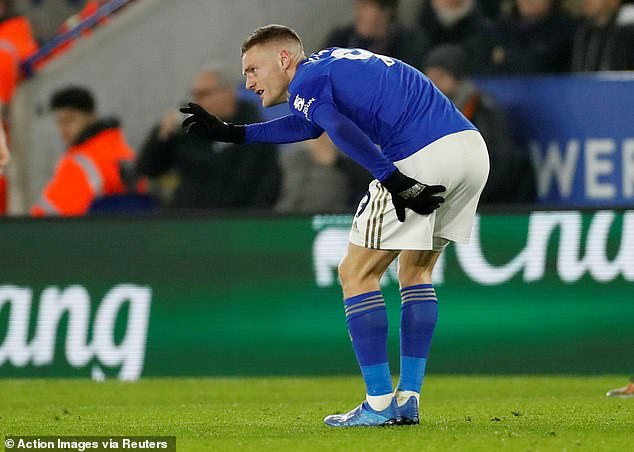 Jamie Vardy could be fit for Leicester's Carabao Cup semi-final