Bournemouth believing in themselves again after a difficult period... their togetherness was too much for Aston Villa, who are relying on Jack Grealish Bournemouth showed excellent togetherness and character v Aston Villa  Eddie Howe's side secured a 2-1 win against Villa in their quest to stay up Howe insists that it's important for his team to keep believing in themselves

By Tom Farmery For The Daily Mail

It seems almost unfair and insulting to conclude that Bournemouth's best two qualities on Saturday were their togetherness and strength of character.

At full time, after a vindication and demonstration of manager Eddie Howe's skill-set honed in the lower leagues, Bournemouth's players were called into a huddle by assistant coach Steve Fletcher.

Fletcher was the striker who 11 years ago in April scored the winner in a 2-1 victory over Grimsby to keep Bournemouth in the Football League. 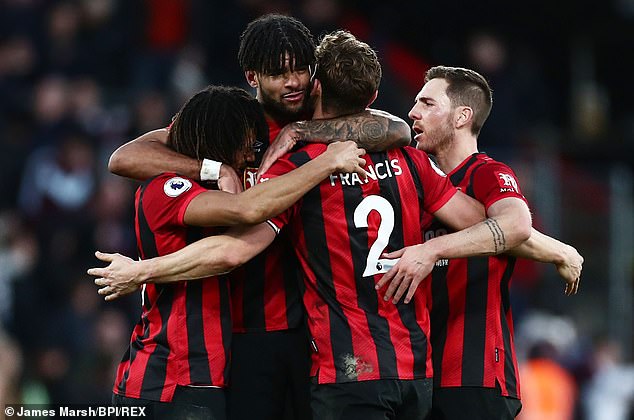 Bournemouth's togetherness and strength of character were important against Aston Villa

How fitting, then, that it should be the 47-year-old to deliver what captain Simon Francis said was a rousing speech in the minutes that followed what could also prove to be a season-defining victory.

'I think it was Fletcher's idea to say a few powerful words within the huddle and we've been doing a lot of that together recently,' said Francis.

'Sometimes we have huddles in training the day before a game, just to spread a few big and important words and messages to know how important these next few games are.'

Contrast this to the way Jack Grealish reacted when trudging back to the tunnel. He received a few boos from home supporters for his part in Jefferson Lerma's two

John Bercow WILL get peerage as Tory MP says it's 'right thing to do' for ...