Inter dealt huge blow in Serie A title race as goalkeeper Sami Handanovic is ruled out of crucial games against AC Milan, Lazio and Napoli with broken finger Samir Handanovic fractured his little finger in an Inter Milan training session Slovenian goalkeeper missed his side's Sunday's 2-0 victory over Udinese   According to reports, Handanovic could be out of action for three or four weeks

Inter Milan goalkeeper Samir Handanovic has a fractured finger in his left hand and is likely to miss crucial matches including the derby against AC Milan.

Inter said Monday the 35-year-old Slovenian injured his hand in training and X-rays 'showed a hairline fracture to his little finger.' He did not play in Sunday's 2-0 win at Udinese.

According to Inter, 'his condition will be reassessed on a daily basis,' but reports said Handanovic will be sidelined for three to four weeks. 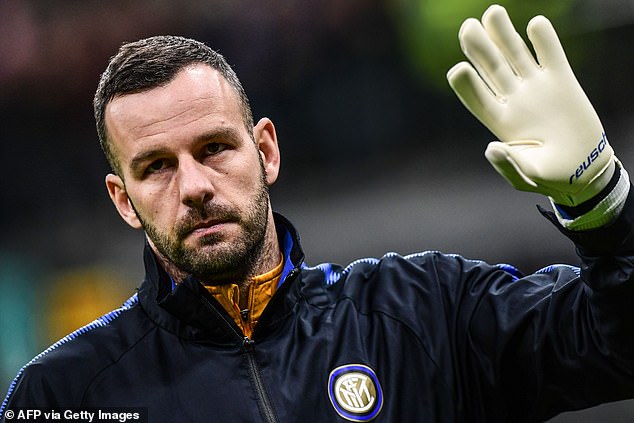 Inter Milan goalkeeper Samir Handanovic has fractured a finger and

PREV sport news Gareth Bale's agent insists there was 'no chance' for a Tottenham return in ...
NEXT Eddie's gift of the gab can't cover deficiencies on eve of Six Nations mogaznewsen