'More blood on him than Fury!': Fans react as Matthijs de Ligt sustains nasty head injury in Juventus defeat in Lyon... with the French side scoring the decisive goal when defender was off the pitch getting treatment Matthijs de Ligt sustained a nasty head injury in Juventus' defeat to Lyon  The defender had blood pouring from his face as he left the field for treatment  To make matters worse his side conceded from a set-piece in his absence The Dutchman completed the 90 minutes sporting a unique bandage

Matthijs de Ligt was left covered in blood after sustaining a nasty head injury in Juventus' defeat to Lyon.

The defender tripped while going up for a head in the opposition box with his teammate Alex Sandro landing on him.

The 20-year-old took a boot and shinpad to the head and was forced to leave the field for treatment with blood pouring from his face. 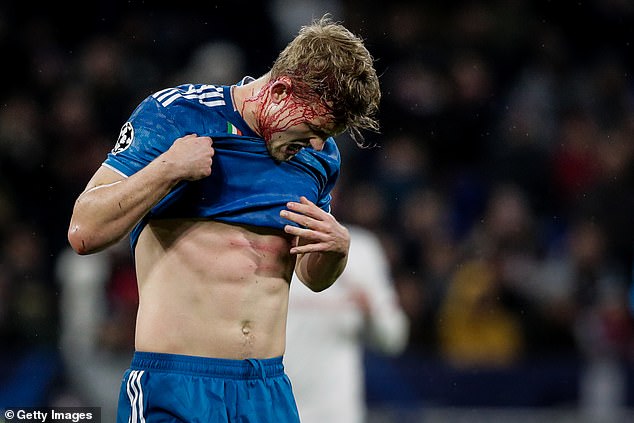