'I have done some real thinking and I'm ready to go again': Steven Gerrard insists he's 'all in' as Rangers manager after hinting he could quit in wake of Scottish Cup defeat by Hearts Steven Gerrard has cooled talk that he is about to quit as Rangers manager The former Liverpool captain was livid after his side were beaten by Hearts But Gerrard insists he is 'all in' at Rangers before they take on Hamilton at Ibrox Gerrard also revealed striker Alfredo Morelos will be back on Wednesday night

Rangers boss Steven Gerrard insists he is 'all in' at Rangers after hinting he could walk out of his job at Ibrox after losing in the Scottish Cup at Hearts last weekend.

The Gers are trailing rivals Celtic in the Scottish Premiership and the latest setback in the quarter-final stage delivered Gerrard's 'lowest' moment since he took the reigns in 2018.

Gerrard's frustrations stemmed from his side's woeful performance at Tynecastle, just three days after they produced a brilliant display to get past Braga in the Europa League last-32. 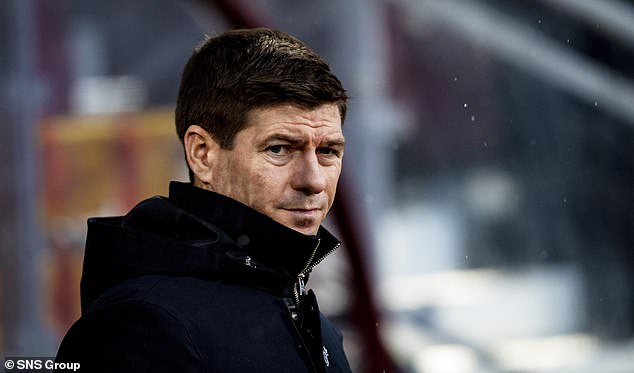 But speaking ahead of Wednesday night's match against Hamilton at Ibrox, Gerrard insists his future lies in Glasgow.

He said: 'I'm good. Ready for the next challenge. The game at the weekend was bitterly disappointing, I have done some real thinking with the people around me and I'm ready to go