Premier League season could finish ABROAD, says Gary Neville who suggests Europe to host remaining games and says he is 'not sure' bosses can deliver end of campaign

Gary Neville and Jamie Carragher have once again delved into the complexities of how football could restart, by exploring the option of concluding the Premier League overseas.

Pressure is now mounting on the English game to make a call regarding what remains of the campaign, after the likes of Ligue 1 took the strong decision to bring an immediate end to their top flight.

The return of the Premier League is appearing more and more difficult in the midst of the ongoing coronavirus pandemic, with the best course of action appearing to group teams together in a select location to play out the season under lock and key. 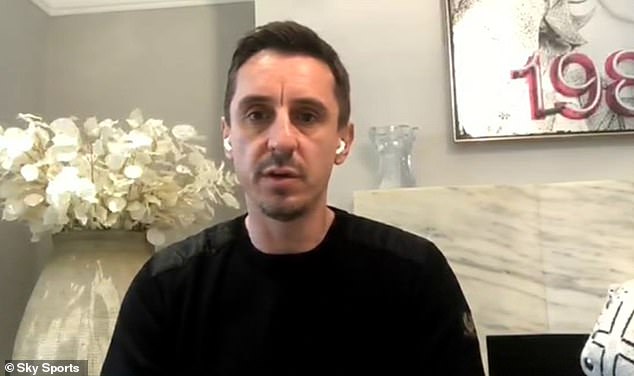 Speaking on Friday morning on the Sky Sports Football show, Neville and Carragher assessed the viable options while weighing up the fairness and morality of proceedings.

For Manchester United legend Neville, he feels select areas within Europe have the capacity to host the final run in of fixtures.

'If the PL is serious about delivering the matches that remain in the most-safe environment they would move it to somewhere that is three or four hours away that is safe from coronavirus and somewhere that has proven it can handle it,' said Neville.

'There are some hotspots in Europe that could handle the PL finishing. I’m not sure they can deliver what they want to do in this country with the amount of logistical issues.

'My view on this matter a few weeks ago was if the PL wanted to deliver a message to the nation, as part of a package, they could have bought £4m worth of tests to deliver the PL and then give £20m to the NHS to buy tests and surround it in a package that was acceptable to the nation. I think it will be difficult.'

Fellow pundit and former rival Carragher was in agreement with Neville, and considered the prospect of a World Cup scenario where teams - thoroughly and regularly tested - would play in close proximity.

'You can’t have squads

PREV sport news Sergio Aguero reveals how ditching barbecues and Argentinian steak has lead to ...
NEXT sport news Premier League clubs 'to vote next week on Project Restart' and government may ...