'It was a good headbutt... goodbye and thank you': Italy's World Cup winning captain Fabio Cannavaro reflects on Zinedine Zidane's shock red card for headbutting Marco Materazzi in 2006 final Zinedine Zidane saw red for a shocking headbutt on Marco Materazzi Italy and France's 2006 World Cup final had gone to extra time with score 1-1  Fabio Cannavaro would go on to win that year's Ballon d'Or for his performances

It instantly became one of the most iconic images in World Cup history.

And Italy's World Cup winning captain, Fabio Cannavaro, has even admitted it was a 'good headbutt' that saw Zinedine Zidane see red in his final ever game.

With the game locked at 1-1 in extra time of the 2006 final in Berlin, the legendary French midfielder exchanged words with Marco Materazzi and then proceeded to floor him with a headbutt to the chest. 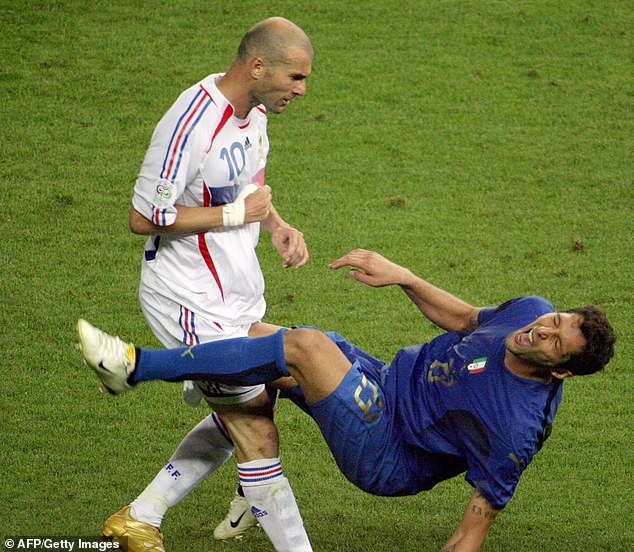 The centre-back claimed months after the final that he had said 'I'd prefer your sister' after Zidane had complained about his constant shirt-tugging, telling him: 'If you want my shirt so much I'll give it to you afterwards'.

Without their talismanic captain France went on to lose the shootout, handing Italy their fourth world crown.

During an Instagram Live, Cannavaro admitted he didn't even see the pivotal moment of the final.

He said: 'I have to be honest, I only remember the noise. I was nearby I turned and I saw Marco on the

PREV sport news Why Floyd Mayweather v Manny Pacquiao's 'Fight of the Century' was a ...
NEXT sport news Premier League clubs 'to vote next week on Project Restart' and government may ...

'Play your part!' Britons warned 'stick to the rules' as thousands flock to the ...

Coronation Street's Jack P Shepherd enjoys family day out with his children and ...