George Russell is first among Formula One’s big men. Lewis Hamilton is 5ft 7in. Russell, another talented Englishman at the start of his career, is 6ft 2in.

His neck, a central component of a grand prix driver’s livelihood, is long and stringy like the body it sits upon.

Some necks in the sport are as thick as oak trunks, like Kimi Raikkonen’s and Fernando Alonso’s. But Russell’s is a white-collar sort of neck. 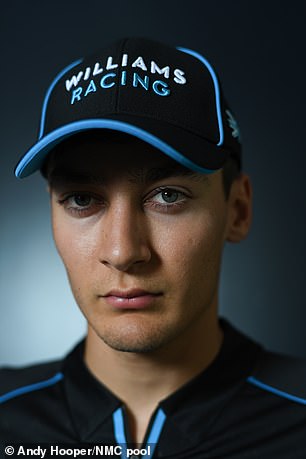 Yet the Williams driver, who will compete in his second British Grand Prix on Sunday, published a video online demonstrating conspicuous neck strength that might have looked like a magic trick to the uninitiated.

In the footage, Russell has his feet on the ground against a wall. His trainer holds his head. Russell leans sideways to 45 degrees, before his trainer pushes him back to the vertical, by his head. Repeat. It has been called the ‘Egyptian Mummy Neck Plank’.

‘I was surprised by the reaction that got,’ said Russell in his first face-to-face interview since lockdown, at the team factory in Grove, Oxfordshire.

‘It is difficult to put into perspective how hard driving an F1 car is on the neck. Even people in Formula Three can’t understand it.

‘The best way to describe it is that a high-speed corner will have five or six Gs and your head with your helmet weighs about 8kg (17lb), so that works out as 50kg (nearly 8st) going through your neck. The way to think of it is that you are lying on your bed with your head over your side, and then somebody places 50kg on your head. That is what you sustain for a second through a corner.

‘When you do it once it is no big deal but several times for 70 laps that is different.’

Gym for Russell during lockdown has been in an outbuilding of his parents’ house in Leicestershire. He put up a squat rack and pull-up bar and bought weights to fit out the room. 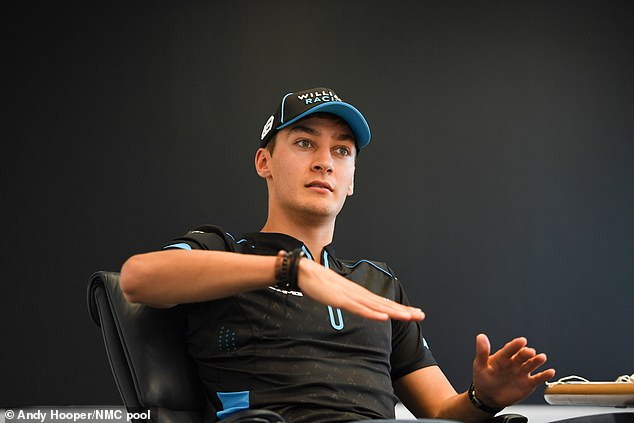 Given his height, he cannot bulk up too much, keeping himself at 11st 9lb with a strict diet — salad for lunch each day — that has become second nature.

‘The minimum weight for drivers should go up by three or four kilos (about half a stone),’ he said. ‘Some of the new crop are bigger than the likes of Lewis and Felipe Massa (5ft 4in).’

Russell took up running quite seriously in the Covid break but an ankle niggle put paid to his intended timed test. He was aiming for 5km in the low 17-minute region after five weeks of dedicated training.

But when he returned to racing after the lull, the fitness work