They're lovin' it! Arsenal duo Lucas Torreira and Emiliano Martinez hit McDonald's to celebrate Arsenal's stunning FA Cup triumph against rivals Chelsea Lucas Torreira and Emiliano Martinez marked their FA Cup win with a McDonalds The pair were seen posing with the staff as they held a McDelivery bag last night The late-night meal came shortly after Arsenal won the club's 14th FA Cup trophy It also came after they secured their place in the Europa League for next season

Lucas Torreira and Emiliano Martinez have lifted the lid on Arsenal’s FA Cup celebrations following their 2-1 win over Chelsea at Wembley.

Torreira took to Instagram to share an image of himself and Martinez picking up a takeaway after securing the clubs 14th FA Cup triumph.

The pair were pictured posing alongside two members of staff while holding the iconic McDelivery bag. 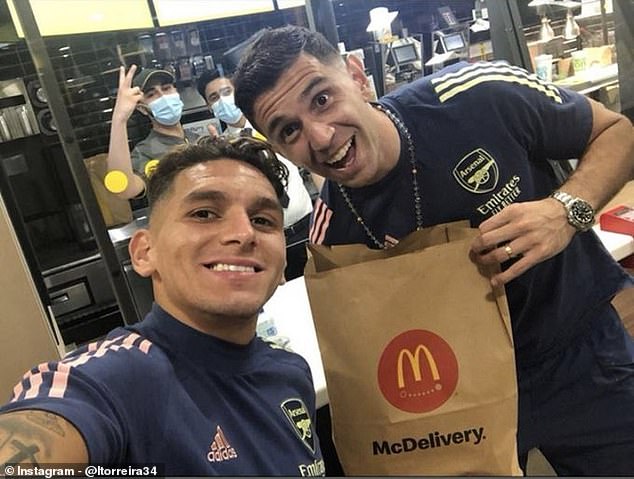 PREV sport news 'Half a season one trophy. Poch - six years zero!': Arsenal fans troll Spurs ...
NEXT Wanderers attacker 'not in a good place' after head clash in win over Phoenix