'Other players like Lamps didn't get the send-off they deserved': John Terry says his bizarre guard of honour 26 minutes into Chelsea's game against Sunderland in 2017 was one of the 'favourite moments' in his career John Terry received a guard of honour in the last match of his Chelsea career  The defender was replaced after 26 minutes of the win over Sunderland in 2017 Chelsea had already won the Premier League title ahead of the final day The former England captain admitted the strange swap was a career highlight

John Terry has admitted that the controversial guard of honour during his final Chelsea match was one of the best moments of his career.

The ex-Blues captain was substituted after just 26 minutes - the same figure as his squad number - during the final match of the 2016-17 Premier League season against Sunderland and his team-mates clapped him off the pitch in two lines.

Chelsea had already won the title by that point and had a FA Cup final against Arsenal a week later, but Terry's moment of glory received a mixed reception despite the good-feeling in the air. 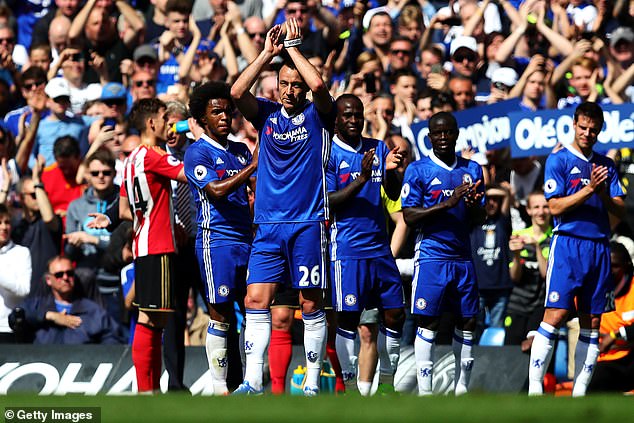 Terry even added that he was happy he got a send-off after fellow Chelsea legend Frank Lampard was not given one during his Stamford Bridge exit in 2014.

Lampard, who is now the Blues head coach, was in a running feud with then-boss Jose Mourinho and was not given a guard of honour after 211 goals in 648 matches.

Speaking about his own tribute with Kevin Pietersen on the

PREV sport news Willian 'joked to Thiago Silva he would've STAYED at Chelsea' if he knew he was ...
NEXT sport news Bath 23-27 Wasps: Late penalty try drama gives Lee Blackett's side a lifeline