West Ham board 'sold Grady Diangana for £20m to West Brom against David Moyes' wishes' as fury deepens at the London Stadium after Mark Noble and Co hit out at the club for selling him A civil-war has broken out at West Ham after the club overruled David Moyes The Hammers head coach wanted to keep Grady Diangana at the London club But the club instead sold their talented prospect to relegation rivals West Brom To make matters worse, West Ham suffered an embarrassing defeat on Saturday

A civil-war has broken out at West Ham after the club overruled manager David Moyes in the decision to sell Grady Diangana.

The Hammers head coach wanted to keep their prospect according to The Sun but the club instead sold their talented prospect to relegation rivals West Brom for £20million.

To make matters worse, West Ham suffered an embarrassing defeat on Saturday as their pre-season preparations came to an end against relegated Bournemouth at the London Stadium. 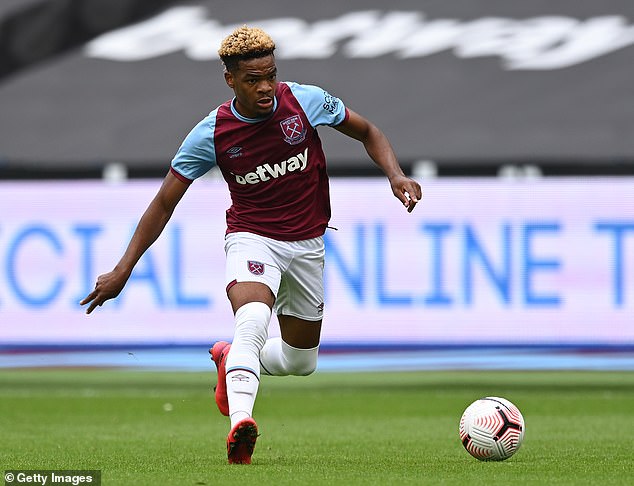 The Hammers lost 3-5 to the Cherries, who ran rampant in London as they prepare for life in the Championship this season.

The defeat has added insult to injury after the club's players shared their anger over the sale of winger Diangana to West Brom on Friday night.

In response to Diangana's move to their Premier League rivals, West Ham captain Mark Noble tweeted: 'As captain of this football club I'm gutted, angry and sad that Grady has left, great kid with a great future!!!!!'

Declan Rice 'liked' Noble's tweet in a show of support from the Chelsea target, whilst Jack Wilshere had a sly