Nick Kyrgios wasted no time at all in taking to social media to make his opinion known following Novak Djokovic's horror show at the US Open.

World No 1 Djokovic shocked the tennis world after a moment of madness saw him swipe at a ball in anger and hit a line-judge directly in the throat.

Djokovic, the overwhelming favourite to win the Grand Slam at Flushing Meadows this month, was automatically disqualified as a result of his rash swipe.

It comes as the latest in a long string of controversies from Djokovic, and Kyrgios couldn't help but be critical of the Serbian once again.

Creating a poll via Twitter, Kyrgios wrote: 'Swap me for jokers incident. "Accidentally hitting the ball kid in the throat" how many years would I be banned for?'

He then gave fans the option to vote between three options of five years, 10 years or a 20-year ban.

The Australian made a major hint at favouritism within the sport, while he is often portrayed as the bad boy of tennis for much less severe incidents. 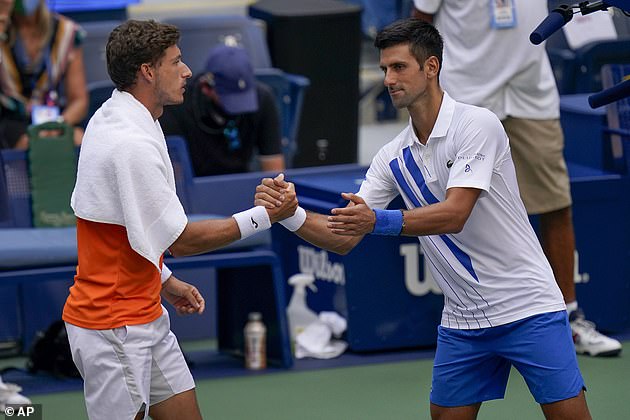 The Serbian star trudged off, exiting the US Open despite being the overwhelming favourite