English football clubs divided over whether to take a knee with some fearing that gesture is in danger of losing its impact if it is to be continued indefinitely Players have been kneeling in support of anti-racism movement since restart  Several clubs feel it will lose significance if 'taking a knee' continues indefinitely  On Saturday, in 16 of 37 matches, players did not kneel before the kick-off

By Malcolm Brown And Rob Draper For The Mail On Sunday

English football is divided over whether it is still relevant to ‘take a knee’ before matches.

What began during Project Restart as a unanimous gesture of support for the anti-racism movement after the shocking death of George Floyd in America in May, is now causing confusion for many players.

Several clubs have decided that it will lose significance if continued indefinitely and on Saturday in 16 out of 37 matches in the top four divisions, players did not kneel before kick-off. 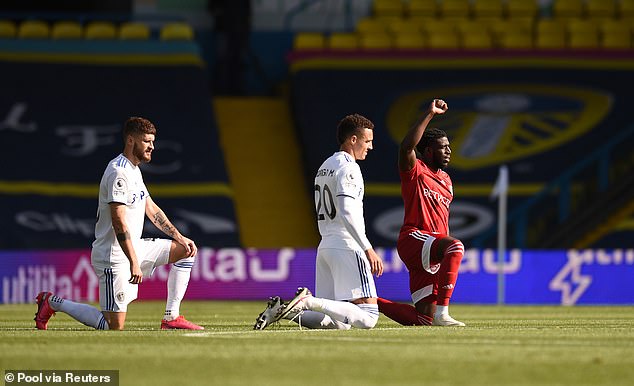 It went ahead in all four Premier League matches and at every game in the Championship except Norwich v Preston. But the picture was less clear in League One and League Two where the majority did not take a knee. Out of 23 matches in the lower two leagues players did not take the knee in 15 of them.

QPR have reiterated their commitment to fighting racism and social injustice after their players and Coventry’s declined to take the knee, as has been habitual in televised games, before Friday night’s Championship clash on Sky TV.

Manager Mark Warburton and chief executive Lee Hoos have both spoken in support of player protests to highlight racial inequality.

But they insist that taking the knee is an issue for players and that the club should be judged their record rather than the gesture itself. Both teams agreed