Fans blast 'atrocious' £14.95 pay-per-view service on BT Sport Box Office with NO pre-game build-up, interviews or analysis before Chelsea's clash with Southampton Supporters have criticised BT Sport Box Office for their 'atrocious' service   BT's first pay-per-view offering was Chelsea's game at home to Southampton  Fans were frustrated with there being no build-up despite the £14.95 fee

The first ever pay-per-view game in Premier League history has been slammed by fans as 'atrocious' and 'absolutely ridiculous' after BT Sport Box Office broadcast Chelsea vs Southampton with no pre-match build-up at all.

Supporters shut out from grounds due to the coronavirus crisis now have to pay £14.95 to watch each Premier League game that wasn't originally scheduled to be shown live on either BT Sport, Sky Sports or Amazon Prime, and the first of those came on Saturday at Stamford Bridge.

However, the service was immediately criticised, with many bemoaning the lack of pre-game build-up, meaning the game did not have any of the interviews or analysis that viewers usually receive for TV games. 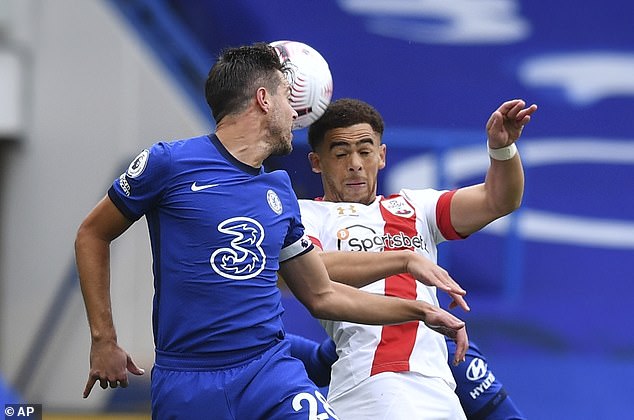 Instead, a holding screen with simple text advertising the game stayed on BT Sport Box Office until just five minutes before kick-off.

One Twitter user wrote: '£15 and there’s not even a build up. BT Sport have the masks on'.

Another wrote: 'BT Sport charging £15 for Chelsea vs Southampton, you would think that would include some pre-match build-up (interviews, analysis etc). But no... coverage starts at 2.55pm'.

Another user criticised the disappointing service and stated that it isn't worth the money.

They wrote: 'If the joke of £15 for a game through