There's not usually much drama on the field during the fourth quarter of a blowout game in the NFL, but there was definitely some drama during the final quarter of Arizona's 31-5 blowout win over Houston and that drama came from something known as NFL scorigami.

If you're not familiar with scorigami, it's pretty simple: The internet cheers when the NFL gives us a final score that's never been seen before and that's what the Cardinals-Texans game gave us on Sunday. The final score of 31-5 marked the first time in NFL history that a game had ever ended with that score.

The idea of scorigami has grown so much on Twitter that even the Cardinals were celebrating the fact that they were now in the club.

Scorigami! First team in NFL history to win a game 31-5.

It's an honor to join the @NFL_Scorigami club.

The idea of tracking every scorigami was created by SB Nation writer Jon Bois and there's now a Twitter account with more than 250,000 followers that tracks each and every scorigami.

The Cardinals win marked the second scorigami of the season. After going five straight weeks with zero scorigamis, the NFL saw its first one of the year in Week 6 when the Rams beat the Giants 38-11.

In the Texans-Cardinals game, the impossible had to happen for the two teams to achieve this final score.

For one, the Texans had to record a safety against the high-powered Cardinals offense, which somehow happened in the first quarter.

The Texans ended up tacking on a field goal on the first play of the second quarter and that put them at five.

For the Cardinals, scoring 31 points almost didn't happen. On their first touchdown drive, they had to convert a fourth-and-2 from Houston's 23-yard line to keep the drive alive, which they were able to do when Kyler Murray hit Christian Kirk for a 13-yard gain.

On their second touchdown drive, they had to convert a THIRD-AND-23, which they were somehow able to do when Murray hit A.J. Green for a 41-yard gain.

Even with the score at 31-5, the scorigami wasn't safe late in the game. Houston was driving down the field in garbage time threatening to derail everything. If the Texans got even a late field goal, the scorigami wouldn't have happened and that's because the NFL has already seen a 31-8 final score (Most recently in a Ravens win over the Saints in December 1999). If they scored a touchdown and kicked the extra point, that also would have destroyed the scorigami, because 31-12 has already happened in NFL history.

In the end, the Texans failed on a fourth down at their own 49-yard line, which preserved the scorigami. And that's how you get the a

PREV sport news Sporting Lisbon and Porto are two of EIGHT clubs fined by UEFA for Financial ...
NEXT Injured Goulding out of NBL season-opener, in race to be fit for Melbourne derby mogaznewsen

Police have arrested hundreds of suspected drug traffickers in a global sting, ...

Scott Peterson to be re-sentenced to life in prison without parole for murder ...

Covid-19 UK: Experts warn Plan B may not be enough to contain Omicron

Jennifer Aniston explains choosing 'career over kids' and reflects on ... 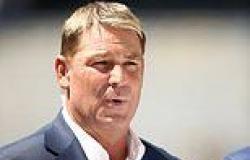 Scott Peterson to be re-sentenced to life in prison without parole for murder ...