The New England Patriots are gearing up for what will be the biggest game of the season to this point in the year when they travel up to Buffalo to face the Bills on "Monday Night Football.'' Of course, this game is big for what it will mean for the AFC East standings and the current playoff picture. At the moment, New England sits in first place in the division at 8-4, but Buffalo is only a half-game behind at 7-4, and earning the first of two head-to-heads left on the schedule could prove to be critical in tiebreaker scenarios.

So while we'll be looking at this game from that very basic point of view, there's also a fascinating side story that is worth watching: Mac Jones in the cold weather. On Monday night, the temperature is forecasted to drop to 25 degrees in Buffalo with winds coming in at 20 to 30 mph. That'll be a big challenge for the Jacksonville native in Jones, who played his college ball at Alabama. With him now situated in New England for the foreseeable future, playing in these sorts of conditions -- and playing well -- will be key.

Jones has already started to get a taste of the northeast weather over the last few weeks, including during the Week 12 win over the Titans in Foxborough where there was even a few snow flurries coming down at times. Jones -- who threw for 310 yards in the win -- noted that he wasn't impacted much by the weather, but did highlight how he likes practicing in the elements to get a better feel for what it could be like on game day.

"It's going to get even more cold, so just getting ready for that," Jones said on the Wednesday leading into the Tennessee game. "I mean, you can't really predict or prepare, it's not like you can go throw it in a refrigerator or something or freezer. You just got to go out there and do it, and it is what it is."

Monday's matchup does promise to feature raw conditions, which Jones and the rest of the Patriots will need to deal with.

"I don't think there's too much we haven't seen," Belichick said Friday of the weather. "We haven't seen a lot of snow this year, but I don't know what we could do about that. We practice in wind. We practice on sunny days, cloudy days, windy days, calm days, hot days, cold days, wet days, dry days. What's it going to be? Whatever it is, it is, and if we haven't done it, then we'll adjust to it. We've dealt with almost everything."

Of course, on top of the elements, the crowd will also be a factor in this game with Bills fans being arguably the most rambunctious fanbase in the entire NFL.

"I've been to a lot of cool stadiums and stuff," Jones said this week of playing in hostile environments. "I've been both the backup quarterback and the starter. That's college. I haven't really played a ton of NFL games. This'll be new for me, but I know a lot of guys on the team have played in a lot of big games. At the end of the day, you've just got to block out the noise the best you can. It's going to be loud. You just have to prepare yourself mentally for that. That's pretty much all you can do. You can look at the past and see what you've gone through, but you won't be able to experience it until it happens."

Last week, we talked about J.C. Jackson being a key upcoming free agent that the Patriots should strongly consider retaining, despite the likely massive contact it'll take to keep him in Foxborough. In Week 12, he proceeded to force a key fumble and record his seventh interception of the year in the win over Tennessee, further bolstering his résumé.

As we now turn our attention to this massive showdown between New England and Buffalo, this is another key mile marker for Jackson to further show he's worth throwing the bag at this offseason. Jackson could be tasked with covering star Bills corner Stefon Diggs on Monday night and a strong outing there could go a long way in continuing to prove he is, in fact, a true shutdown corner.

When these two teams met last year, Jackson didn't have the best of times blanketing Diggs. According to Pro Football Focus, Diggs caught four of his six targets against Jackson for 87 yards and two touchdowns. The receiver finished his monster night with 145 yards on nine catches and three scores. That can't happen again if the Patriots want to maintain their lead in the division, so Jackson is in line for quite the responsibility on Monday evening.

The Patriots could be without Hunter Henry at some point later this season, but it'll be for a good reason. The tight end and his wife, Parker, are expecting their first child and the baby is due in December. Henry said this week that if the baby is born on a game day, he will skip the game and be there for the birth of his first-born child.

"That's a tough conversation, but this is my first, man," Henry said. "If it had to be a game or seeing my firstborn born, I'm going to go see my child be born. We're going to do our best to not have that come across."

Henry also said he is hoping that a situation doesn't unfold where his wife goes into labor during a Patriots game.

"That's where the issue kind of lies," he said. "But we're ready, and we have a lot of backup plans to be ready to go."

Fair or unfair, Mac Jones is constantly being compared to his predecessor in Tom Brady. With every stride he makes in his development as a quarterback, it's put beside where Brady was as he was coming up through the ranks in Foxborough. Of course, their playing styles are also similar, which further fuels the comparisons. While there's plenty to dive into in that regard on the field, Jones is now following in the footsteps of Brady off of it.

Of course, that is very reminiscent of Brady's "TB12" brand, which he has evolved into not only a clothing brand but an overall health/lifestyle conglomerate. The jury is out as to how far Jones will take his "MJ10" brand, but, at the moment, 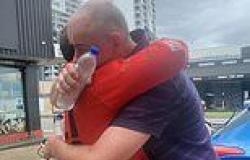