The Tennessee Titans are getting healthy, and that could be unwelcome news for the Cincinnati Bengals when the teams face off in a 2022 NFL playoffs on Saturday. The Titans (12-5) won the AFC South despite injuries that hampered the offense. That included the loss of star running back Derrick Henry for more than half the season. Now, Henry is back from his foot injury and Tennessee is trying to get back to the AFC Championship Game after their surprise run in 2019. The Bengals (11-7) pulled off a tense 26-19 victory last Saturday against the Raiders for their first playoff win in 31 years.

Kickoff is set for 4:30 p.m. ET. The Titans are four-point favorites in the latest Bengals vs. Titans odds from Caesars Sportsbook, and the over-under for total points scored is 48. Before you consider any Titans vs. Bengals picks or 2022 NFL playoff predictions, make sure you check out what SportsLine NFL expert Larry Hartstein has to say.

A former lead writer for Covers and The Linemakers, Hartstein combines a vast network of Vegas sources with an analytical approach he honed while working for Pro Football Focus. This season, he has been on fire. Hartstein is 70-46-1 with his last 117 sides, for a profit of more than $1,800.

In addition, Hartstein has gone an astounding 22-11-1 on his last 34 picks involving Tennessee, returning more than $1,000 to $100 bettors. Anyone who has followed him is way up.

Now, White has set his sights on Bengals vs. Titans and just revealed his expert picks and predictions. You can head to SportsLine now to see his picks. Now, here are several NFL odds and Divisional round betting lines for Titans vs. Bengals:

Why the Titans can cover

Tennessee is 6-3 against the spread at home, and an offense that features Henry, A.J. Brown and Julio Jones can be as dangerous as any in the NFL. The Bengals have been stout against the run, but they have major issues on the defensive line, notably missing Larry Ogunjobi. Cincinnati allowed 6.7 yards per carry against the Chiefs in Week 17 and 7.4 yards to the Raiders, both NFL season-highs.

The Titans have eight wins straight-up against teams with winning records this season, the most in league history. Quarterback Ryan Tannehill can make big plays when receivers A.J. Brown and Julio Jones are healthy. They teamed up for 94 catches for 1,303 yards despite missing a combined 11 games. Bengals QB Joe Burrow has been sacked an NFL-high 53 times, so Harold Landry (12 sacks), Denico Autry (nine) and Jeffery Simmons (8.5) will make it a point to get pressure.

Why the Bengals can cover

The underdog is 4-1 against the spread in the last five meetings and Cincinnati won the matchup last season. The Bengals were seven-point home underdogs, but won 31-20 behind 249 passing yards and two TDs from Joe Burrow. The second-year QB and rookie WR Ja'Marr Chase have been on another level, with Chase posting 1,571 yards including the playoff game, most by a rookie in NFL history. Burrow led the league in completion percentage (70) and yards per attempt (8.7).

The Bengals' defense is banged up but opportunistic, with LB Logan Wilson (four INTs) and CB Chidobe Awuzie (14 passes defended) capable of huge plays. Cincinnati is 11-7 against the spread this season, going 4-1 ATS in its five games as a road underdog.

How to make NFL

Friday 20 May 2022 05:04 PM Donald Trump denies he has STOPPED supporting David Perdue in his race for ... trends now

Friday 20 May 2022 05:04 PM Ukraine claims baby boy, one, has died after being raped by Russian soldiers trends now

Friday 20 May 2022 05:04 PM Expert warns trendy foragers to be on the lookout for toxic plants trends now

Friday 20 May 2022 04:55 PM Johnny Depp superfans are CAMPING outside courthouse to cheer on actor and bag ... trends now

Friday 20 May 2022 04:46 PM Monkeypox patients could be infectious for up to FOUR WEEKS after symptoms ... trends now 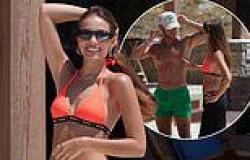 Friday 20 May 2022 05:04 PM Ukraine claims baby boy, one, has died after being raped by Russian soldiers trends now