Micah Parsons did something unprecedented as a rookie. He was forced to play as nearly a full-time edge rusher after simply moonlighting there in college -- and flashing in that gig -- and then ran away with the Defensive Rookie of the Year award. He's a freaky athletic outlier.

Parsons will be a tough act to follow for the defensive group from the 2022 draft class. Who will stand out most?

Before I begin, the last three DROYs have been pass rushers. Darius Leonard took the award back to Indy in 2018 after only leading the NFL in total tackles and solo tackles while compiling 12 tackles for loss, seven sacks, eight pass breakups, four forced fumbles and two picks. Phenomenal.

This award is predominantly owned by defenders who sack the quarterback and those who tackle the ball carrier. Marshon Lattimore in 2017 and Marcus Peters in 2015 are the only cornerbacks to win the award since Charles Woodson in 1998. Of course, the NFL gets more passing-infatuated every year, thereby in theory creating more opportunity for cornerbacks to make plays, but history is on the side of front seven players to win DROY. Also, like Offensive Rookie of the Year, this is a first-round pick dominated distinction. Only two of the last 20 DROYs were selected outside of Round 1.

The No. 1 pick begins my rankings, which probably feels strange to the common NFL fan. Not only was Walker my "buyer beware" prospect in this class -- far before anyone knew he was going to be the No. 1 overall selection -- he's now switching from a classic defensive end at Georgia's to an outside linebacker in Mike Caldwell's system. The brilliant Sigmund Bloom of Football Guys recently posed the question on Twitter: "How many times has a player gone No. 1 overall and immediately changed positions?"

I'm going to venture a guess it's an extremely rare occurrence. Walker is big and long and possesses a high-level of athleticism relative to his size. I like that he won't be asked to shoulder top edge-rusher responsibilities in Year 1 given the presence of Josh Allen. But he will not be nearly impactful enough to garner legitimate DROY consideration as a rookie. His pass-rush ability is far too raw right now, and the Jaguars won't be in many advantageous situations in the second half of games for Walker to pin his ears back.

Walker's teammate, Lloyd, is far more "ready" to be impactful out of the gate. He's lower than you probably expect for a few reasons. First, I do think he's a little green in coverage, and that's an element that typically gets exposed with young linebackers in the NFL. Second, there are only so many tackles to go around in Jacksonville's defense. The Jaguars overhauled the position with almost unprecedented investment this offseason by signing Foyesade Oluokun to a mammoth deal in free agency, trading back into Round 1 for Lloyd, and drafting three-down stud Chad Muma in Round 3.

In that newly formed second-level trio, will Lloyd have enough opportunities to stand out as the top playmaker? Feels like a stretch to believe that'll be the case, but he is a rangy, high-energy 'backer.

I initially wanted to put Bonitto higher as a super dark horse to win the award. The dude was borderline unblockable in the Big 12 thanks to his burst, bend, and array of pass-rush moves. He's at No. 8 because he's going to struggle with the immense length he'll see at offensive tackle in the NFL, and he has to get considerably stronger to develop any type of bull rush.

Bonitto is sized similarly to Von Miller when he entered the league in 2011 out of the Big 12. The significant difference between Bonitto and Miller -- strength. Miller not only could win with elite acceleration, flattening ability, and dazzling pass-rush moves, he could win through a blocker when the offensive lineman was least expecting it.

I envision a huge breakout for Bonitto in 2023 after a year spent adding bulk and sheer power to his game.

Those will likely be humbling enough to push Gardner down the DROY ranks.

In Gardner's other, more advantageous one-on-one scenarios, he's likely to thrive as the intimidating and suffocating press-man corner he was at Cincinnati. Gardner's in for a steady rookie season; it just won't be good enough for him to be a serious DROY candidate.

I had Stingley graded a touch higher than Gardner, and the slightly better ball skills were the main difference between the two on film. Of substance, on his plate in coverage will be Keenan Allen, Davante Adams, A.J. Brown, Terry McLaurin, and Tyreek Hill. Not nearly as frightening as Gardner's scheduled matchups.

Under the watchful eye of Lovie Smith, cornerbacks like Dré Bly, Nathan Vasher, Charles Tillman, Tim Jennings, and Johnthan Banks blossomed. Stingley has the press technique, smooth athleticism, and innate ball-tracking ability to be the next in line. I'm a bit leery of rookie cornerbacks arriving as absolute stars given the rules today that put defensive backs at a disadvantage and how well offensive coordinators can scheme receivers open. But Stingley will be impactful. Just not enough to earn major votes for DROY. Houston likely playing from behind relatively often won't help his opportunities either.

Thanks for signing up! Keep an eye on your inbox.
Sorry! There was an error processing your subscription.
5. Kyle Hamilton, S, Ravens

A safety has never won DROY, but is Hamilton really just a safety? Not at all! And in today's age in the NFL, the best safeties do everything. My No. 1 prospect in the 2022 class is a tremendous blitzer, resembles a linebacker when attacking outside runs, slides over the slot and handles quick receivers or tight ends in man or zone, and flashes as a traditional free safety deep in coverage.

Baltimore's secondary features plenty of truly versatile players, headlined by Marlon Humphrey, and Hamilton will be asked to showcase his entire skillset as a rookie, which will lead to a stat-sheet stuffing debut season.

The Bills needed a No. 2 cornerback who was a fast, high-caliber athlete. They got that with Elam, and his situation is glorious. Not only will he mostly avoid the opposition's No. 2 receiver, he's in a very cornerback-friendly system with Leslie Frazier and Sean McDermott.

Buffalo will mix coverages on occasion, but after spending the majority of his Florida career in man, Elam will get ample opportunity to sit stealthily in zone and follow the eyes of the quarterback before pouncing on where the ball is being thrown. Plus, the Bills will be in plenty of game scripts where the opposition will feel compelled to force the issue through the air. That, plus the relentlessness of Buffalo's pass rush, are the ingredients of the recipe typically needed for a dynamite rookie season at the cornerback spot.

Amidst all the chaos outside the top 10 in the 2022 draft, the Chiefs, without a trade or any other hoopla, quietly snagged Karlaftis, an NFL-ready three-down defensive end to bolster their pass rush, which was a dire needed heading into this season.

Karlaftis has looked bound for the first-round since his 18-year-old campaign at Purdue in 2019, and he got stronger and more advanced rushing the quarterback since that eye-opening freshman season. Will he break the rookie sack record of 14.5, set by Jevon Kearse in 1999? Probably not.

However, Chiefs defensive coordinator Steve Spagnuolo has coached some damn good rushers in his day, and plenty of attention will still be paid to Chris Jones on the interior of the Chiefs front.

Hutchinson had the finest arsenal of pass-rush moves -- including a J.J. Wattian swim -- and he's nearly 6-7 with brute speed-to-power conversion. His motor never stops, either, and the Lions desperately needed an alpha rusher up front. Now they have it.

There's some concern with Hutchinson's debut professional season that he'll be asked to be "the guy" instantly. And he probably will be. But it's not as if Detroit has no other pass-rushing threats. Former first-round pick Charles Harris -- who's only 27 -- had 7.5 sacks and 52 pressures in 2021. The Okwara brothers are long, athletic, relentless rushers who, when healthy, are challenging matchups, and the Lions selected high-energy disruptor Josh Paschal from Kentucky in the third round. 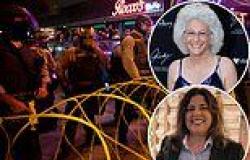 Australian of the Year Dylan Alcott's urges young people with disabilities to ...