No position in pro football is more important than quarterback. It's certainly true in the NFL, where the league's elite quarterbacks command $40 million salaries. The fact is also a reality in the USFL, as two of the league's top quarterbacks -- the Stallions' J'Mar Smith and the Stars' Case Cookus -- will look to lead their respective teams to the rebooted league's first championship this Sunday at Tom Benson Hall of Fame Stadium.

Both quarterbacks have overcome considerable hurdles to reach Sunday's championship game. Smith, who was actually drafted by the San Diego Padres in the 24th round of the 2015 MLB Draft, went undrafted in 2020 following a successful career on the gridiron at Louisiana Tech. He was signed by the Patriots that spring before being waived in late July. Smith's next opportunity didn't come until 2021, when he spent several months with the CFL's Hamilton Tiger-Cats.

Like Smith, Cookus went undrafted in 2020 despite having an impressive career at Northern Arizona. Cookus, who in 2015 won the Jerry Rice Award as the best freshman in the FCS, spent time with four different NFL teams but was unable to find a longterm landing spot. He also had a brief CFL stint before the USFL came calling.

For both quarterbacks, the USFL has been the light at the end of a long, winding tunnel. Cookus led the Stars' late charge to reach Sunday's title game, while Smith helped the Stallions get off to an 8-0 start while establishing themselves as the league's premier team. Last Saturday, hours after the Stars' come-from-behind win over the New Jersey Generals in the USFL's first playoff game, the Stallions posted a 31-17 playoff win over the New Orleans Breakers. In a game that was closer than the final score would indicate, one of the biggest differences was Smith, who threw and ran for scores against arguably the USFL's best defense.

Playing for the Stallions has given Smith a chance to reunite with his college coach Skip Holtz, who this week said that Smith is like his third son.

"Certainly grateful and appreciative for the opportunity to be together again," Holtz said of getting the chance to reconnect with Smith. "I think J'Mar has got the talent to be a really, really good quarterback. I think the world of him."

Sunday will make the first matchup between the two teams since May 15. Philadelphia, a 2-2 outfit at the time, raced out to a surprising 17-7 lead. But the Stallions, led by Smith and a defense that pitched a shutout in the second half, scored 23 unanswered points to cruise to a 30-17 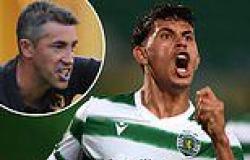 Wednesday 17 August 2022 08:55 AM Mother of man who shot himself after driving into Capitol barrier blames ... trends now

Wednesday 17 August 2022 08:55 AM Pete Waterman pays tribute to Darius Danesh as he reveals they were planning to ... trends now

No regrets for Barty, but she would love one more crack at Serena... mogaznewsen

Wednesday 17 August 2022 08:46 AM Kate Beckinsale shows off tattoo tribute to her mum and daughter trends now

sport news Kalyn Ponga 'was NOT drunk' when he and Kurt Mann were told to leave Newcastle ... trends now

No regrets for Barty, but she would love one more crack at Serena... mogaznewsen