Aaron Rodgers shows off mysterious new arm tattoo and we might have already decoded it, but probably not

Four months ago, Aaron Rodgers signed a monstrous new contract extension with the Packers, but he might not have any of that money left because it looks like he just spent it all on a tattoo.

For the first time in his life, the Packers quarterback is sporting a tattoo, and he took to social media Wednesday to reveal what his first -- and currently only -- tattoo looks like. The only thing I can say about it is that it's almost as mysterious as it is elaborate.

I could try and describe the tattoo here, but I feel like it would be a lot easier if I just showed you the picture of it.

The tattoo was drawn by Hungarian artist Balazs Bercsenyi.

According to Rodgers, every part of the intricate tattoo has a special meaning for him.

"There's a deep and meaningful story and connection to absolutely each element of this art piece, and I'll share a little more about that one day," Rodgers wrote on Instagram.

Since it could be months -- or even years -- before Rodgers shares the meaning behind the tattoo, I thought it would make sense to go ahead and decode this thing right now. I've read "The DaVinci Code" twice, so I feel like I'm more than qualified to figure this thing out.

Here's what I've come up with so far:

The meaning behind the two lions. This one is easy. It obviously means that Rodgers is going to beat the Lions to a pulp twice this year, and he's so sure of it that he got it tattooed on his body. You can't get ink like this and lose, so I'm guessing the combined final score of these two games will be something like 95-3. The two lions could also be Rodgers' way of telling us that he owns the Lions, which would kind of make sense since he already owns the Bears.

I think what I'm trying to say here is that the two lions means that he now owns two NFC North teams. It's a plausible theory.

The meaning behind the body of water. Underneath the two lions, there's a circle that contains a body of water, and I'm not even going to try to decipher that one because this guy has already done it. That body of water clearly leads somewhere.

You might be laughing at Rodgers' tattoo now, but no one will be laughing when the entire world eventually floods and his tattoo is the only thing that can lead us to the last remaining piece of dry land.

That being said, I guess it's also possible that putting the all-seeing eye on his tattoo is Rodgers' way of letting us know that he's the star of the new "National Treasure" series on Disney Plus. I mean, it can't be a coincidence that he unveiled his tattoo on the same day that the logo of the show was announced, and the LOGO has an ALL-SEEING 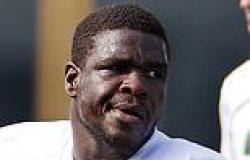