Months after trading six draft picks and committing a fully guaranteed $230 million to land Deshaun Watson from the Texans, the Browns have lost their star quarterback for the first six games of the 2022 season, CBS Sports NFL Insider Josina Anderson reports. Former federal judge Sue L. Robinson determined Monday that Watson should be suspended for six weeks after hearing testimony regarding the former Pro Bowler's alleged off-field conduct. The QB this offseason faced civil lawsuits from 24 different women accusing him of sexual assault or misconduct.

Under this suspension, Watson will miss the following games to begin Cleveland's season: at Panthers, vs. Jets, vs. Steelers, at Falcons, vs. Chargers, vs. Patriots. His first game back will be on Oct. 23 when the Browns visit the Ravens in Week 7.

Watson's suspension arrives after multiple reports indicated the NFL would seek at least a full-season ban for the QB, who recently reached confidential settlements for 20 of the 24 lawsuits. It marks the league's harshest discipline imposed on a QB since Michael Vick was banned indefinitely in 2009, before serving a nearly two-year prison sentence.

Two different Texas grand juries have declined to file criminal charges against Watson, who's been accused of engaging in a pattern of sexual abuse during dozens of private massage therapy sessions. Watson himself has publicly denied any wrongdoing, claiming through his attorney that select sessions led to consensual activity. But the NFL determined in its own investigation that the former Clemson star severely violated its personal conduct policy. In Robinson's decision, she also ruled that Watson must get all his massage therapy from club therapists, according to NFL Network.

This isn't the first time the league has suspended a QB over sexual assault allegations that did not lead to criminal charges, with Jameis Winston and Ben Roethlisberger serving multiple-game suspensions in 2018 and 2010, respectively. The chief difference in Watson's case has been the sheer volume of accusers, with The New York Times reporting in June that Watson sought sexual activity while booking at least 66 different massage therapists over a 17-month span while playing for the Texans.

The Browns aggressively recruited and acquired Watson in March while he still faced 22 active lawsuits alleging misconduct, and just days after the first grand jury declined to file criminal charges. They signed the former first-round draft pick to a record five-year, fully guaranteed $230 million extension as part of the trade, making the 26-year-old QB one of the highest-paid players in the NFL. General manager Andrew Berry and coach Kevin Stefanski have repeatedly defended Watson's character since the trade, citing their own investigation into the QB's off-field history.

Watson's lucrative Browns contract was also structured in such a way that anticipated a significant suspension, with almost all of his 2022 pay coming in the form of a signing bonus. Under the suspension, Watson will lose $333,333 in salary.

In the meantime, the greater impact of Watson's suspension comes on the field, where the Browns will be without their most prized, polarizing addition in years. Cleveland effectively jettisoned former No. 1 overall pick Baker Mayfield, its starter since 2018, by recruiting and rewarding Watson. Mayfield was later traded to the Carolina Panthers. Now the Browns, seemingly built to contend now thanks to star power on both sides of the ball, are set to turn the offense over to journeyman backup Jacoby Brissett, signed this offseason to replace Case Keenum. It's also possible Cleveland could look for external help, perhaps via trade, with the 49ers' Jimmy Garoppolo the most notable option on the market.

Watson was widely considered one of the top young QBs in the NFL before his alleged off-field transgressions saw him miss the entire 2021 season, when he was effectively on paid leave from the Texans while seeking a trade. He helped lead Houston to a pair of winning records from 2017-2020, throwing a career-high 33 touchdowns in his last season on the field.

Watson has the power to appeal his suspension, but the NFLPA announced in 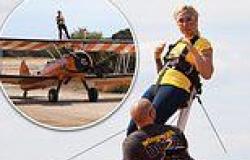