Tom Brady turns 45: Here are two crazy facts about the QB that everyone should know on his birthday

You've probably been hearing a lot about Tom Brady today and that's because it's his birthday (It also might have to do with the fact that he was prominently named in the NFL's report on the Dolphins' tampering scandal, but let's focus on the birthday part of this).

Crazy fact 1: Brady is the only player in the NFL over the age of 40.

Not only is Brady the oldest player in the NFL, but he's the only active player on any roster that's over 40. Rams offensive tackle Andrew Whitworth turned 40 in December, but he retired shortly after Los Angeles' Super Bowl win, leaving Brady as the only player over the age of 40. This means that Brady is at least FIVE YEARS OLDER than every other player in the league.

The more you think about this stat, the more mind-blowing it gets. Brady was drafted on April 16, 2000, and according to NFL research, there are currently 104 active players who weren't born yet. To put Brady's age in perspective, he's older than Trey Lance and Ja'Marr Chase combined (44).

It's fitting that Brady just turned 45, because of those 104 players, he could end up facing more than 45 of them this season. The guys over at Bookies.com made a list of every player Brady could face this year who wasn't yet born when he was drafted. In Week 1 alone, he could end up facing four players who weren't born to see him drafted. 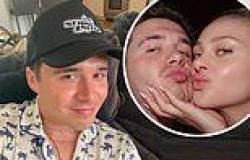