Former NFL wide receiver Chad "Ochocinco" Johnson made a big impact on the field during his playing career, and he is trying to do the same off the field in retirement. The Cincinnati Bengals legend recently left an incredibly generous tip at a North Carolina restaurant.

Johnson spent 11 seasons in the NFL, and he was one of the best receivers of his era. As a result, Johnson really cashed in, and he is paying that forward these days.

On Wednesday, Johnson posted a photo of a $1,000 tip he left at Stephanie's Restaurant in North Carolina. Not only did Johnson open up his wallet, but he also left a bit of a confession in his note to the waiter.

"I once scored 6 touchdowns in Madden using myself," Johnson wrote on the receipt.

This is not the first time Johnson has left a $1,000 tip on a relatively small bill. Back in May 2020, he gave such a tip to help servers at a Florida restaurant that had just reopened following a COVID-19 shutdown.

"Congrats on re-opening, sorry about the pandemic, hope this helps," Johnson wrote in a message to his water. "I LOVE YOU."

Wednesday 10 August 2022 09:04 PM Steve Martin, 76, may retire from acting after Only Murders In The Building trends now

‘The love for the game has never left me’: Goodes joins Indigenous soccer ... mogaznewsen

Brian tested positive for monkeypox. Now he's smashing the stigma around it on ... 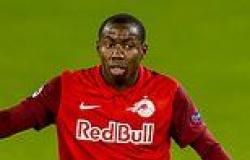