As the oldest stadium in the NFL, Soldier Field has become a beacon of history and tradition for Chicago Bears fans. So much so, plans for the team's potential move to the Illinois suburb Arlington Heights have been criticized by franchise icons such as Brian Urlacher and Jay Cutler.

One of the Bears' current players, though, isn't exactly as enthusiastic about soldiering on at the stadium. After taking to Soldier Field for a practice Tuesday, kicker Cairo Santos expressed displeasure with the turf.

"Especially Week 1, our first game of the season — I've seen better," Santos told the Chicago Sun-Times. "It's just what we have to deal with. The less of a problem you make it in your mind, it helps you overcome it and just go."

Santos has gone to unusual measures to prepare for Soldier Field's, shall we say, non-pristine playing surface. The eight-year NFL veteran explained the ball flies differently and isn't "super even all the time" at Soldier Field, so he found somewhere with similar conditions to train during the offseason: his neighborhood soccer field.

"I was going to a turf field at a high school, which was perfect," said Santos, who managed to convert a franchise-record 93.8 percent of his kicks in 2020. "It was almost like, 'OK. I'm getting too comfortable.' So in my neighborhood, there's a soccer field and the grass is a Bermuda grass. It's real long. I was like, 'OK. This is more like it.'"

Soldier Field, the Bears' home since 1971, had an AstroTurf playing surface until natural grass replaced that in 1988, and 2002 is when the most recent renovation was completed.  Its 61,500 capacity is the NFL's

Friday 30 September 2022 04:56 PM David Beckham and his brood head out to support Victoria at her Paris Fashion ... trends now

sport news Chelsea poke fun at themselves as they reveal their gold third kit with FIFA 23 ... trends now 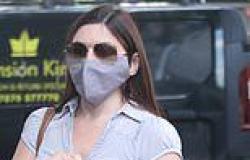