DeVonta Smith had the best season for a rookie wide receiver in Philadelphia Eagles history, creating bigger expectations for year two with the franchise. The Eagles acquired A.J. Brown this offseason to fortify the passing game, making Smith the forgotten man amongst the stars of the Eagles offense.

At the NovaCare Complex, Smith has been far from forgettable. Since returning from missing a few practices with a groin injury, Smith has dazzled with contested catches and becoming the go-to receiver for Jalen Hurts. He beat James Bradberry for a deep touchdown in one-on-ones in Sunday's session and made an impressive catch as Hurts rolled to his left in Tuesday's practice.

There's no secret Smith is a better receiver than he was last year -- and he was pretty good in year one.

"I know the offense now," Smith said to CBS Sports HQ at Eagles camp Tuesday. "I don't have to worry about this play...I know what I gotta do. I can just focus on the details and like that. The communication with the offense as a whole, everything's better."

Smith had 64 catches for 916 yards and five touchdowns last year for the Eagles, setting a franchise record for receiving yards in his rookie season. His 14.3 yards per catch was seventh in the NFL (minimum 60 receptions) and was one of only nine players with 60 catches, 900 yards, and 14 yards per catch last season.

Add A.J. Brown to the mix and the sky's the limit for Smith, who's primed for a big second season. Getting 1,000 yards is just the beginning for Smith to unleash his vast potential.

"Just keep building. Build off what I did last year," Smith said. "Things are slowing down and I know I have someone now that can help me out (A.J. Brown), that can teach me different things, that's been here for a minute. Just 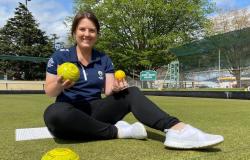