Another week, another list of notable NFL players whose health statuses are the topic of major conversation. Dak Prescott kicked things off earlier in the week when he did not rule out playing this Sunday after having the stitches removed from his surgically repaired thumb. Prescott is itching to get back on the field after watching teammate and backup Cooper Rush lead the Cowboys to a pair of wins over the past two weeks.

Prescott isn't the only notable player who is dealing with an injury. Christian McCaffrey sat out Panthers practice nursing a thigh injury. Tua Tagovailoa's status for Miami's Thursday night game in Cincinnati remains in question after he was injured during this past Sunday's dramatic win over Buffalo. Keenan Allen is hoping to play for the first time since injuring his hamstring in the Chargers' season-opener. Jets fans are hoping that Zach Wilson get make his season debut this Sunday in Pittsburgh, where Steelers fans are keeping their fingers crossed that Minkah Fitzpatrick can play after entering the concussion protocol.

Here's a look at each of those injuries as well as every other significant injury entering the NFL's fourth week of the regular season.

The Dolphins have a myriad of injuries this week to be wary of. Their left tackle, Armstead, is questionable with a toe injury, and two wide receivers, Waddle and Wilson, are questionable as well. Both were limited participants Tuesday and Wednesday, which bodes well for their statuses tomorrow night. The headline of course is Tagovailoa, who is dealing with back and ankle issues. While he's officially listed as questionable, he did say Wednesday that he plans to play, and he was limited in the final two practice sessions. The star cornerback, Howard, was limited Tuesday and Wednesday as well with groin and glute issues.

Reader and Sample did not practice at all this week for the Bengals, so them being ruled out for Thursday night is not surprising. Cincy will certainly want its right tackle, Collins, in the starting lineup. He sat out of practice Monday and Tuesday but returned as a full participant Wednesday -- which bodes well for his status. As for Pratt, he was a full participant in the final two practice sessions after being limited Monday.

Falcons: Cordarrelle Patterson was the only Falcons player who did not practice Wednesday. Atlanta's dual threat was given the day off to rest his injured knee.

Bills: Receiver Jake Kumerow (ankle) and defensive tackle Jordan Phillips (hamstring) were held out of Wednesday's practice, while safety Jordan Poyer (foot) practiced in a limited capacity. Cornerback Dane Jackson (neck) was also limited as he practiced for the first time since getting injured during Buffalo's Week 2 win over Tennessee.

Chargers: Chargers coach Brandon Staley announced Wednesday that pass rusher Joey Bosa will be placed on injured reserve as he is dealing with a groin injury. Bosa, who will undergo surgery, is expected to return at some point this season.

Giants: Sterling Shepard (knee) did not practice, which was expected as he is slated to go on injured reserve after tearing his ACL in Monday's loss to the Cowboys. Fellow wideout Wan'Dale Robinson also did not practice on Wednesday as he is dealing with a hamstring injury.

Jets: Zach Wilson has been cleared to make his season-debut after missing the season's first three games. Jets coach Robert Saleh said on Wednesday that the second-year quarterback will start Sunday's road game against the Steelers if all goes well during this week's practices.

Wilson has been recovering since suffering a bone bruise and a meniscus tear during New York's first preseason game against the Eagles. The Jets are off to a 1-2 start with 15-year veteran Joe Flacco filling in for Wilson.

Steelers: Minkah Fitzpatrick was a full participant on Wednesday, a day after Mike Tomlin announced that the star safety was in the concussion protocol. Punter Pressley Harvin III also practiced in full on Wednesday despite dealing with a left hip injury. 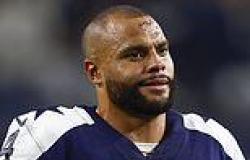