In October, while waiting in the impossibly long school pick-up line for my kindergartener, I recorded a TikTok emphatically stating "the Falcons are going to make the NFC playoffs."

Now, this wasn't a disingenuous take born strictly from a time when I had literally nothing to do, I had watched the film and done some research. While I conceded Atlanta was going about their offense in a very unconventional way -- by being extremely run heavy during the NFL's passing renaissance -- that philosophy was working.

In that video, I mention that not only were the Falcons seventh in Football Outsiders offensive DVOA at the time (!), the schedule appeared to be "light" down the stretch, although in the NFL, you never really know how a game is going to play out beforehand.

Since the publication of that video, the Falcons got smoked by the Bengals, won in absurd fashion at home against the Panthers, lost by a field goal to the Chargers, were handled in Carolina by P.J. Walker and D'Onta Foreman then squeaked out a victory against Justin Fields and the Bears at home.

Atlanta's quietly sitting at 5-6, certainly in the thick of the wild-card hunt, and just a half-game behind the Buccaneers for lead in the NFC North. Crazy, I know. Normally, their -15 point-differential would indicate this Falcons teams has no chance at the playoffs, but that differential isn't at the bottom of the conference. It's close to being smack dab in the middle (9th).

Back to the Falcons' affinity for running the football. They've handed it off 361 times through 11 outings. Only Chicago's done it more to date. That's their identity. I do have a feeling they'll have to move it aerially a little more frequently down the stretch to either sneak into the final wild-card spot or stun the Buccaneers for the divisional crown.

On Thanksgiving, they waived wide receiver Bryan Edwards, whom they traded for before the season. And they just called up PSPR alum Frank Darby from the practice squad for Week 12's contest against the Commanders. The receiver room is lackluster, less-than-ideal, etc. It could use -- scratch that -- will need a jolt in December.

All that explains why I have a Falcons wideout at No. 1 this week in The PSPR. He was a blast to watch in college.

We didn't get a Thanksgiving feast-sized collection of PSPRs called up for Week 11 -- actually, none were elevated, and you know what? That's fine. The thankfulness I have for being able to write the Practice Squad Power Rankings every week far outweighs any frustration from a zero call up week. It happens.

However, don't be shy to hit me up on Twitter @ChrisTrapasso to alert me about any PSPR members getting the glorious call.

The expanded, 16-man practice squads are about the only good thing to come out of the pandemic, and they're here to stay in the NFL. Because of this, I run the Practice Squad Power Rankings parallel to the league. I write about 16 individuals every Friday, 10 officially in the rankings and six honorable mentions.

Here's to the Practice Squad Power Rankings flourishing this season and starting to cement its legacy in the hallowed halls of the internet's football-media industry.

Moreland made his PSPR debut in the inaugural season -- 2019 -- after a tremendously productive career at James Madison. There, he had 18 interceptions (including six house calls).

The Jets are his fourth team, and their defense is rock solid. But D.J. Reed got a little banged up in Gang Green's home victory over Buffalo in Week 9. Moreland is actually stylistically similar to Reed. They're both ultra-feisty, super-confident nickel corners with a knack to get their hands on the football.

Outside of Myles Garrett, Cleveland's defensive front -- WOOF! Perry started his college career at South Carolina State -- which low-key has sent a bunch of quality players to the NFL -- before transferring to Illinois. While he didn't have monster stats with the Illini, Perry's play in the summer was enough for him to make Cleveland's practice squad as an undrafted free agent. At 6-foot-1 and around 300 pounds, he's the penetrating type to Browns need to generate any semblance of interior disruption for opposing quarterbacks.

The Texans play the Dolphins this week, a club that loves the RPO slant over the middle. While no linebacker in football is athletic enough to stay with the likes of Tyreek Hill and Jaylen Waddle after a run fake, Johnson would represent the tiny contingent of second-level defenders who can get close to manning that assignment athletically. Check his pro-day workout from 2021. He's a freak physically.

Johnson is a larger-than-life blocker from Florida. It feels like that program pumps out plenty of those types, doesn't it? Anyway, the 6-foot-7, 330-pounder with an incredibly long reach went undrafted in 2019 despite a quality final season with the Gators and popped up on the PSPR on occasion over the past few years.

Now, I know what you're thinking -- the Eagles don't need any offensive line reinforcement. Well, while that's undeniably true in regards to the starting unit, Johnson can be the consummate extra blocker to step onto the field in jumbo-package situations.

The Titans are probably going to be without underrated and super-versatile star Denico Autry for Week 12, and while Peevy doesn't provide as much positional flexibility, he's similarly sized to Autry and boasts high-end traits. At 6-5 and around 310 pounds, the former big-time recruit has 35.5-inch arms -- ridiculously long -- and slowly but surely improved in each of his five seasons with the Aggies as a block-shedding run stuffer capable of impressive pass-rush flashes.

Hand is a twitched-up inside-outside corner who began his career in the NFC North with the Vikings. As a rookie, on less than 16% of the snaps in 2020, the former Temple standout proved the bright lights of the NFL weren't too much for him, as he registered a pick and three pass breakups. Chicago's dealing with injuries to safety Jaquan Brisker and second-round rookie Kyler Gordon at the cornerback spot. Now's the time to give Hand an opportunity.

Johnson was the Deebo Samuel of the FBS while at North Dakota State. He was a weapon underneath and in the jet-sweep game because of his immense YAC ability and made routine snags down the football field. Johnson had back-to-back 1,200-plus yard seasons and scored 17 touchdowns in 2018. Geno Smith's been tremendous this season yet could use another bouncy wideout to pair with DK Metcalf and Tyler Lockett in Seattle.

Thompkins had five catches for 53 yards -- including two contested-catch wins! -- during the 2022 preseason. He's also a Tom Brady-type, too, in that he was a 0-star recruit when he joined the Utah State program in 2018. Brady loves an underdog's underdog, and that's precisely what Thompkins is. Lastly, Tampa Bay could use more juice at receiver, especially given how pedestrian the offense has been of late. He has 4.44 speed, had a 38.5-inch vertical and a 132-inch broad jump at his pro day.

I watched so much of Emezie in college. Why's that? Because he started showing out early at NC State, on those Wolfpack teams led by Ryan Finley, Jakobi Meyers, Nyheim Hines, Kelvin Harmon, and Jaylen Samuels. As a freshman, Emezie had 13 receptions for 163 yards with a score. After that, the 6-3, 220-pounder had over 45 receptions and 575 yards in four consecutive seasons, while catching 18 touchdowns.

Aaron Jones is a little banged up. A.J. Dillon has played well this season but the Packers love running the football as much as any club in the league. When they're running it well, they're very difficult to stop. Against the Eagles on Sunday night is an absolute must-have game for Green Bay. Call up Goodson, who was born to run in Mike LaFleur's outside zone system and has serious juice. He ran 4.42 at the combine.

Johnson was a stat-sheet filler at Marshall with 302 tackles, seven picks and 19 pass breakups 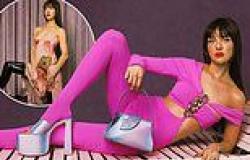