After slow starts to the season, Jonathan Taylor and Najee Harris have come on strong. The two backs will share the field on Monday Night Football when the Indianapolis Colts host the Pittsburgh Steelers. Their price tags in the NFL DFS player pool have dropped throughout the season, but each has gone over 200 total yards with two touchdowns over their last two games. Who should you roster with your Steelers vs. Colts NFL DFS strategy and NFL DFS stacks? Before you make your NFL DFS picks for Steelers vs. Colts on Monday Night Football, be sure to check out the NFL DFS advice, strategy and projections from SportsLine daily Fantasy expert Mike McClure.

McClure is a legendary professional DFS player with over $2 million in career winnings. His methodology has led to enormous cashes on FanDuel and DraftKings. He took down two high-stakes tournaments on FanDuel in 2020 and recorded a pair of top-10 finishes in tournaments with over 130,000 entrants on DraftKings. His lineups also finished inside the top 1% in more than a dozen other tournaments.

This year, he's already won the DraftKings Millionaire Maker twice and the FanDuel Million once. Now, McClure has turned his attention to Colts vs. Steelers and locked in his top daily Fantasy football picks. You can only see his picks and analysis at SportsLine.

Colts running back Jonathan Taylor is one of McClure's top NFL DFS picks for Monday Night Football. The surprise hiring of Jeff Saturday as Indy's head coach has done wonders for Taylor and turned around his season. After ranking 37th among running backs in Fantasy points through the season's first nine weeks, Taylor is third over the last two weeks.

He's coming off 94 total yards and a score against the Eagles' defense that ranks in the top six in points allowed and yards allowed. On the other hand, Pittsburgh's defense ranks among the bottom seven in both categories. Taylor is averaging 21.5 touches per game, which is important to note because six of the last seven running backs to receive at least 12 touches against the Steelers have scored touchdowns.

That production is a continuation of what Steelers fans have come to expect from Pickens, who has formed a strong rapport with rookie quarterback Kenny Pickett. Since Pickett made his debut in Week 4, Pickens has been a top-25 Fantasy receiver. Indy has given up an average of 70.5 yards to starting receivers over their last two games, along with allowing two wide receiver TDs over that stretch. You can see the rest of McClure's NFL DFS advice here.

How to make NFL DFS lineups for Steelers vs. Colts 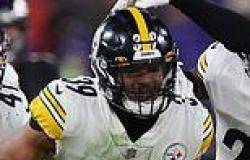