It's finally Week 18 of the 2022 NFL season, and we're keeping you updated on all the action and biggest storylines throughout the day. This week's slate has some fantastic matchups and storylines, and we're here to help you watch it unfold. Check back often to find out everything you need to know.

Texans win, give up No. 1 draft pick

Unbelievable. The Texans, trailing by seven with fewer than four minutes left, converted a fourth-and-12 AND a fourth-and-20 en route to scoring a touchdown with 18 seconds to play to pull within one. (Miraculously, Davis Mills' TD pass on that fourth-and-forever went right through the hands of a Colts defender before dropping into the hands of Jordan Akins for the score.)

And to make matters worse for Houston, it went for two! And got it! The Colts had a few plays to get into field goal range but were unsuccessful, giving the Texans their third and most consequential win of the season. Now, the Bears will have the No. 1 pick in the 2023 NFL Draft.

Down to third-string quarterback Skylar Thompson, the 247th pick in the 2022 NFL Draft, the Dolphins gutted out an UGLY 11-6 win over the Jets on the final day of the regular season. Thanks to Jason Sanders' 50-yard field goal with 18 seconds left -- along with the Bills' win over the Patriots -- Miami clinched the No. 7 seed in the AFC and will travel to Buffalo next weekend.

By way of Derek Watt's one-yard touchdown, the Steelers went ahead two touchdowns late in the fourth quarter. It served as the finishing touches of a 28-14 win, which clinched a 9-8 record and Mike Tomlin's 16TH STRAIGHT WINNING SEASON. It's an incredible feat for Tomlin, who's done it this year with a rookie quarterback who became the starter in-season. And while Pittsburgh will miss the playoffs after the Dolphins beat the Jets, it is set up to have success for years to come.

This is just an incredible throw from Josh Allen on his 49-yard touchdown pass to Stefon Diggs. Enjoy it for yourself:

The Texans are behind! After jumping out to a 24-14 advantage, Houston has since thrown a pick-six and allowed the Colts to drive 58 yards in seven plays to get the go-ahead score. Remember: If the Texans lose, they have the No. 1 overall draft pick and the QB of their choice. This is a big development for Houston fans.

The Bills have offensive weapons galore. Stefon Diggs, Gabe Davis, Dawson Knox, Devin Singletary, Nyheim Hines ... And yet in their regular-season finale, it's John Brown who has made one of the biggest plays of the game. Brown, who played in Buffalo from 2019-20, rejoined the team via the practice squad right after Thanksgiving and is now making his presence felt in a huge divisional matchup. Check out this diving catch that put Buffalo up double digits:

The Texans and Colts? Entertaining?! With significant implications??? That's correct. Davis Mills' responded to the Colts touchdown with a 19-yard pass to Jordan Akins, and then Rodney McLeod responded to that picking off Mills and taking it into the end zone. It's been a wild game in Indianapolis.

That was Jim Nantz on the CBS broadcast, unable to believe that Nyheim Hines was streaking toward his SECOND KICK RETURN TD OF THE GAME! The Bills need to win to lock up the No. 2 seed, and Hines has saved them on a day in which the offense has struggled. He's now got returns of 96 and 101 yards -- becoming the 11th player in NFL history with two kickoff return TDs in one game, according to the CBS Sports research team.

It seemed like no one wanted to break the 14-14 tie in Buffalo. First, Josh Allen threw a red-zone interception before halftime. Then, Mac Jones threw a red-zone pick to start the third quarter. But just two plays after that, the Patriots were back in business after a Devin Singletary fumble. They capitalized in the form of a field goal to go on top.

Michael Jordan touchdown! No, not that Michael Jordan. We're talking about the Panthers' offensive guard, who recovered Sam Darnold's goal line fumble to pull the Panthers even with the Saints.

Veteran defensive backs Devin McCourty (Patriots) and Harrison Smith (Vikings) entered Sunday tied for the most career interceptions among active players with 34. McCourty broke that tie late in the first half Sunday, as his red-zone interception off Josh Allen ensured the Patriots would go into halftime tied with the Bills.

Get used to that, NFL fans, because you'll likely be hearing that a lot over the next decade (assuming Kenny Pickett continues to develop.) The Steelers duo connected for a 31-yard touchdown down the middle of the field to tie the game at seven. Remember, Pittsburgh needs to win and have the Patriots and Dolphins lose to make the playoffs.

The Ravens don't need to win this game, which works out considering Anthony Brown has had a brutal first half. The third-string quarterback, thrust into action due to Lamar Jackson and Tyler Huntley injuries, has thrown two interceptions and lost a fumble that resulted in a Bengals touchdown -- all in the first half. The Bengals look to be on their way to locking up at least the No. 3 seed in the AFC.

Every time the Bills have thrown a punch, the Patriots have punched back. Case and point: After Dawson Knox's touchdown put Buffalo back on top, Davante Parker scored on the ensuing possession to tie things up at 14.

The Bears understood the assignment: lose to the Vikings and lock up no worse than the No. 2 seed in the 2023 NFL Draft. Not only is Justin Fields not playing, but Chicago benched Nathan Peterman for Tim Boyle after three failed drives. And on his second pass, Boyle threw the ball right to the Vikings' Patrick Peterson, whose interception set up a field goal that put Minnesota ahead 16-0.

I added "mostly" to the subhead because as I was writing this blurb, Bears rookie Velus Jones Jr. took the reverse pitch and somehow stayed in bounds as he hugged the right sideline all the way for the 42-yard touchdown. Fortunately for Chicago, its two-point conversion failed.

I'm sorry Texans fans, but your team is playing some good football. Sam Ehlinger clumsily decided to throw the ball as he was being sacked, and defensive end Jonathan Greenard took full advantage by tipping the ball to himself and rumbling 39 yards for the score.

Bengals all over Ravens

With the Bengals and Ravens likely playing each other in the wild-card round next week, Baltimore is resting most of its starters and starting Anthony Brown at quarterback. It's showed, as Brown has thrown two interceptions and the defense has allowed 17 points in just over a quarter of action.

The Patriots are in the playoffs with a win over the Bills, which didn't get off to a great start with Buffalo's kickoff return TD to open the game. But New England immediately responded, as Mac Jones and Co. drove 74 yards in nine plays and tied the game on a two-yard pass from Jones to Jakobi Meyers.

Chris Olave, the No. 11 pick in April's draft, joined former Ohio State teammate Garrett Wilson as the only rookie wideouts to go over 1,000 yards in the 2022 season. The accomplishment came in dramatic fashion as Olave caught the short pass, stopped on a dime -- leaving his defender in the dust -- and then sprinted the rest of the way for a 25-yard touchdown to put the Saints ahead.

Bad start for the Texans

The Texans jumped out to an immediate 10-0 lead, which usually would be great ... except in this scenario. Currently holding the No. 1 pick in the 2023 NFL Draft, Houston will clinch the top spot with a loss. But if it ends up beating the Colts and the Vikings defeat the Bears, then Chicago will pick first, potentially robbing Houston of the chance to take its No. 1 QB prospect.

Credit to Davis Mills and Brandin Cooks for connecting on an 11-yard touchdown, but that's not something Texans fans want to see again today.

You just can't make this stuff up. On the Bills' first play since Damar Hamlin's on-field collapse, and with Hamlin watching from the hospital, Nyheim Hines took the opening kickoff for a 96-yard touchdown! It was the perfect way for Buffalo to start based on how its last game ended, and Hamlin being able to watch just made it even more incredible.

QB revolution has arrived in AFC; NFC veterans hanging on

PREV sport news Jones vows to make swift changes in bid to lift Southampton off the bottom of ... trends now
NEXT sport news NFC rallies to a comeback victory in the first ever NFL Pro Bowl Games in 35-33 ... trends now 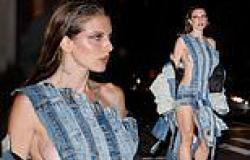