(fashion) Microscopic analysis of the most beautiful and best preserved of the Dead Sea Scrolls has revealed that the parchment was treated with mysterious salts.

Researchers found that the Temple Scroll was prepared with a mixture of salts that did not match those found in the nearby Dead Sea.

These salts appear to have given the scroll its white colour and helped protect it from the ravages of time.

The Temple Scroll, which is written as a revelation to Moses from God, describe a never-built Jewish temple and religious practices to occur therein.

With the first found in 1947 by Bedouin shepherds, the Hebrew scrolls — which number around 900 — are among the best preserved of all ancient documents. 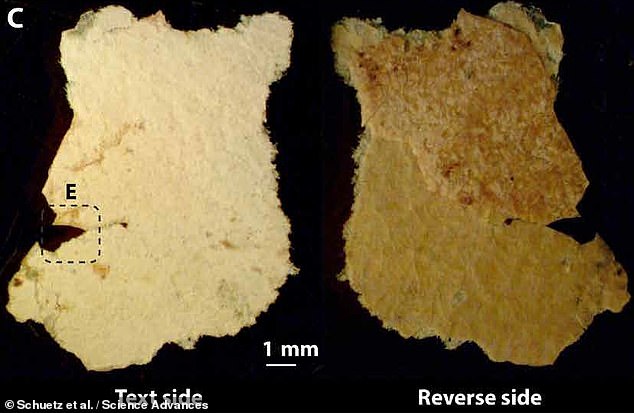 Microscopic analysis of a fragment of the most beautiful and best preserved of the Dead Sea Scrolls, pictured, has revealed that the parchment was treated with mysterious salts

Of all the Dead Sea Scrolls, the Temple Scroll is one of the largest — spanning almost 25 feet (7.6 m) in length — and best-preserved, with the clearest, whitest surface.

This is despite it being made of the thinnest material of all the texts, at only 0.1 millimetres (around 1/250th of an inch) thick.

To investigate how the Temple Scroll's remarkable parchment was made, material scientist Admir Masic of the Massachusetts Institute of Technology and colleagues set about mapping the chemical composition of one small part of the scroll.

This isolated fragment — which measured around an inch (2.5 cm) across — was studied in high resolution using both X-ray and Raman spectroscopies.

'The Temple Scroll is probably the most beautiful and best preserved scroll. We had the privilege of studying fragments from the Israeli museum in Jerusalem called the Shrine of the Book,' said Professor Masic.

'We were able to perform large-area, submicron-scale, non-invasive characterisation of the fragment,' he said, explaining that the technique allowed the parchment to be analysed without subjecting it to harsh conditions that might damage it.

'We collect[ed] hundreds of thousands of different elemental and chemical spectra across the surface of the sample, mapping out its compositional variability in extreme detail,' said paper co-author James Weaver of Harvard University.

Because the fragment of the Temple scroll had not been treated in any way since its discovery, which could have altered its properties, the researchers were able to take a deep look into its original composition, Professor Masic said.

This revealed, he added, 'the presence of some elements at completely unexpectedly high concentrations.'

Researchers found that the Temple Scroll was prepared with a mixture of salts that did not match those found in the nearby Dead Sea. Pictured, an artist's impression of the internal structure of the Temple Scroll

Researchers found that an unusual process was used to make the parchment — one that used a unique mixture of salts taken from so-called evaporite deposits, which are left behind when brines evaporate.

This composition of these salts on the fragment's surface — which included varying proportions of calcium, sodium and sulphur — was different to that typically found on other parchments, they noted.

Salts were sometimes rubbed into the surface of parchments to finish their preparation — in the case of the Temple Scroll, helping to give it its unusually bright white writing surface and, Professor Masic suggests, its robust state of preservation.

The base material of the parchment itself would have been made from animals skins that were treated to remove their hair and fatty residues before being scraped clean and stretched tight over a frame to dry.

Although the team have not yet been able to determine exactly where the unusual combination of salts used on the Temple Scroll came from, it is clear that it does not match those found in the waters of the Dead Sea itself, Professor Masic said. 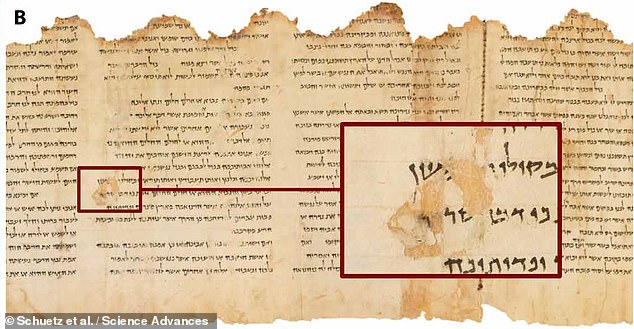 The Temple Scroll, pictured, is written as a revelation to Moses from God, describe a never-built Jewish temple and religious practices to occur therein. The inset shows a region where the bright, inorganic, text-bearing layer has come off from the main body of the parchment

Like the majority of the other Dead Sea Scrolls, the Temple Scroll was placed in a jar and concealed in one of 11 caves in the hillside north of the Dead Sea, near to the ancient settlement of Qumran which was destroyed by the Romans in 73 AD.

Jessica Alba matches tops with daughter Honor, 11, as she steps out with Cash ...