NASA imagery has shown Mauritius in the Southern Indian Ocean being engulfed in a tropical storm, closing shops, businesses and the island’s main airport.

The cyclone, called Calvinia, formed on Sunday and by the following day clouds from a band of thunderstorms on its western side had blanketed the island.

Class three applies to winds between 111 and 129 miles per hour that are capable of causing ‘extensive’ damage, such as structural impact on buildings and serious coastal flooding.

Calvinia intensified on Sunday night and became a severe tropical storm, with maximum sustained winds of 40 mph and heavy rain pounding the island. 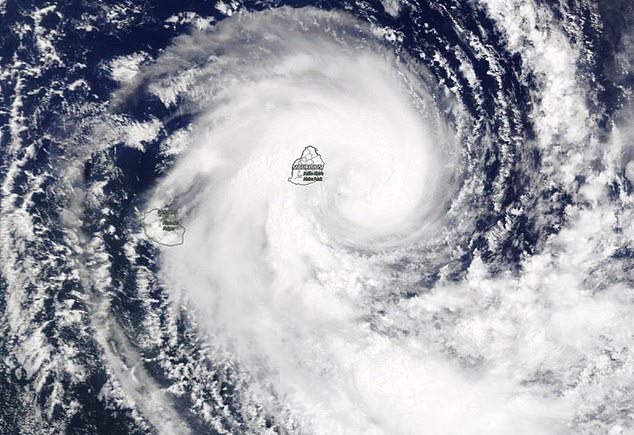 On Dec. 30, 2019, the MODIS instrument that flies aboard NASA's Terra satellite provided a visible image of Tropical Storm Calvinia covering the island of Mauritius in the Southern Indian Ocean, with the French island of Réunion to the west 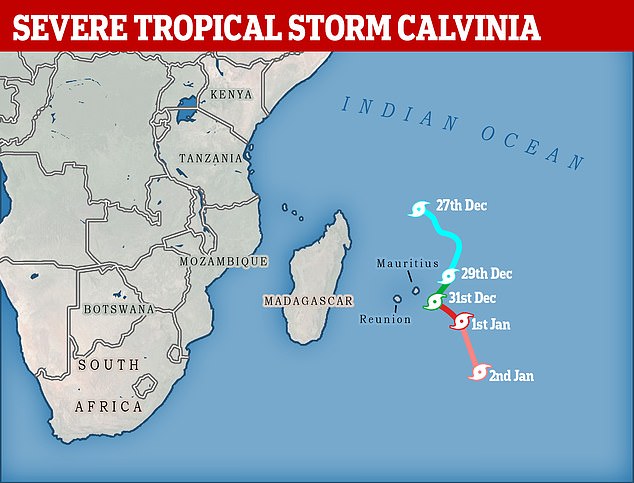 Images from the MODIS imaging sensor aboard NASA’s Terra satellite showed a thick, round band of thunderstorms obscuring the comparatively tiny island.

The MODIS image revealed bands of thunderstorms from the western side spiraled into the low-level centre of circulation, or the 'eye of the storm'.

NASA’s Terra satellite is one in a fleet of NASA satellites that provide data for hurricane research.

Calvinia’s centre was about 75 miles east of Mauritius at 9am local time on Monday, according to the Mauritius Meteorological Services.

‘A movement towards the west will bring the centre closer to Mauritius,’ the weather service warned.

‘Cyclonic conditions – wind gusts of up to 120 km/h – may occur over Mauritius by the early afternoon.’

Mauritius closed its main airport on Monday in its capital city Port Louis Harbour, in anticipation of Calvinia.

'With a deterioration of weather conditions and the announced closure of the airport at 12:10am, Air Mauritius wishes to inform all passengers that all arrivals and departures have been