The world's oldest preserved brain, belonging to an ancient Briton who lived 2,600 years ago, may hold the key in the fight against dementia, scientists believe.

Known as the 'Heslington brain', the extraordinarily well-preserved organ was discovered in a muddy pit during excavations in the village of Heslington near York in 2008.

The unprecedented level of preservation is thought to be down to clusters of tightly folded proteins known as aggregates.

These folded structures may have protected the brain and prevented it from decomposing, according to scientists.

Misfolding of rogue proteins is a known cause of Alzheimer's and similar diseases.

Researchers now hope to understand the difference between disease-causing protein folding and the aggregates that helped preserve the brain for millennia.

The scientists are hopeful their analysis could help create treatments for protein-folding conditions that cause cognitive decline, such as dementia. 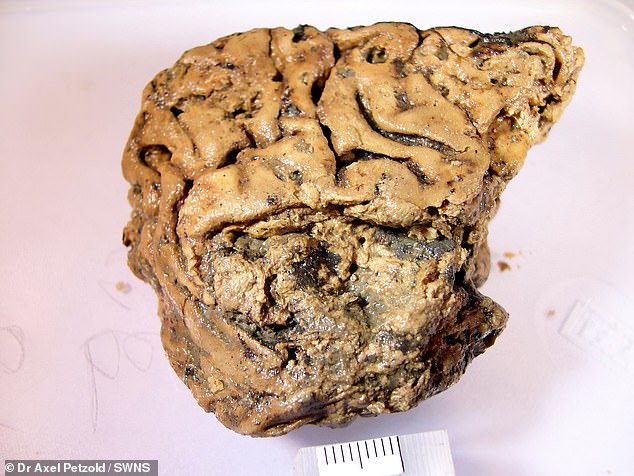 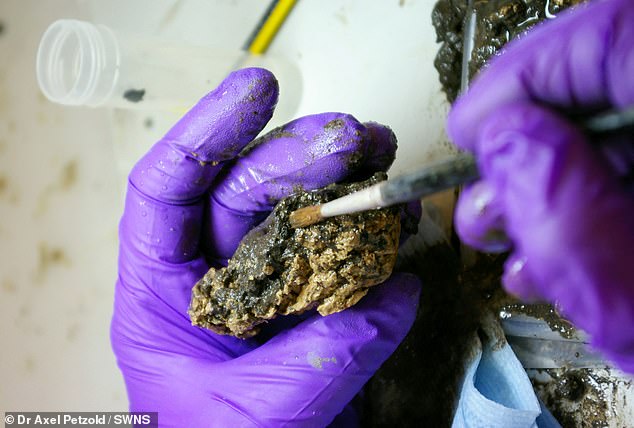 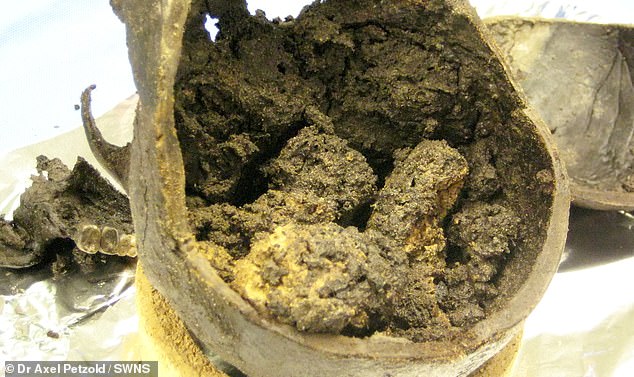 WHAT IS THE HESLINGTON BRAIN?

The Heslington brain is the name given to a 2,600-year-old preserved brain.

It was dug up in the village just outside York in 2008.

Researchers say the preservation of the organ is an enigma as the brainis normally one of the first thngs to decompose after death.

Despite it having shrunk to only about a fifth of its original size, it showed few signs of decay.

It was inside a decapitated skull at an Iron Age site and researchers studying the brain claim it had a 'resilient, tofu-like texture'.

The brain's owner, believed to be a man in his 30s, had been hanged before being decapitated with a knife and his head appears to have been buried immediately.

Some experts believe he it is possible the man was the victim of a human sacrifice.

All other soft tissue on the skull had rotted away, including flesh and hair.

'There are a number of well-known mutations to brain proteins which can promote aggregate formation and which are related to human disease,' said corresponding author Dr Axel Petzold, a neurologist at University College London.

'These findings have implications for diseases related to protein folding and aggregate formation.'

The brain of the ancient British man, who died in his 30s between 673-482 BC, is the world's oldest surviving grey matter.

It was found inside a decapitated skull at an Iron Age site, and researchers studying the brain claim it had a 'resilient, tofu-like texture'.

The brain's owner, believed to be a man in his 30s, had been hanged before being decapitated with a knife and his head appears to have been buried immediately.

Some experts believe it is possible the man was the victim of a human sacrifice.

The brain's preservation has been called enigmatic by researchers, with no clear explanation.

However, a few theories have been suggested beyond the protein folding.

Inhibition of autolysis - the process where bodily tissues destroys itself after death via its own enzymes - may have helped preserve the brain.

It likely started in the outer parts of the brain, potentially as an acidic fluid seeped into it and slowly spread inwards.

Writing in the study, the researchers explain that 'preservation might have been possible by an acidic compound'.

Dr Petzold also suggested the the manner of this individual's death, or subsequent burial, may have enabled the brain's long term preservation.

'Something cruel must have happened to this person,' he said, pointing to