An electric bike designed to be used on water could be the basis of a future Olympic sport, according to the team behind it.

The Hydrofoiler XE-1 was developed by New Zealand startup Manta5 and has been launched in the USA at the Consumer Electronics Show (CES) in Las Vegas.

Manta5 says it is 'designed to replicate the cycling experience on water' and can travel at speeds of up to 12mph.

The bike features hydrofoils in place of wheels, a propeller that lifts it out of the water as the rider picks up speed and pedals to give it power.

'It replicates the workout of a traditional road or mountain bike - but on water', says Manta5 CEO Greg Johnston. 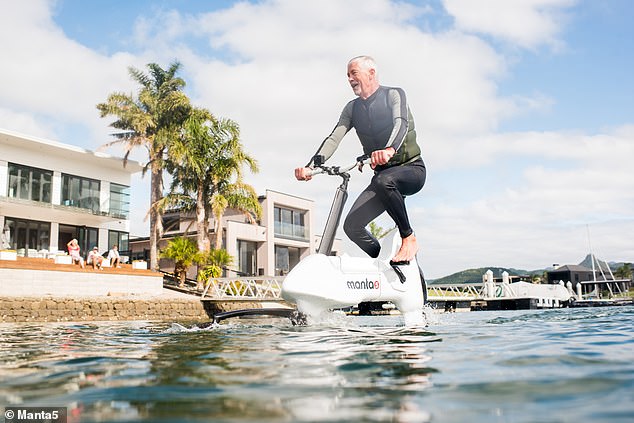 The Hydrofoiler XE-1 was developed by New Zealand startup Manta5 and has been launched in the USA at the Consumer Electronics Show (CES) in Las Vegas. Company founder Guy Howard-Willis is demonstrating the device in this picture 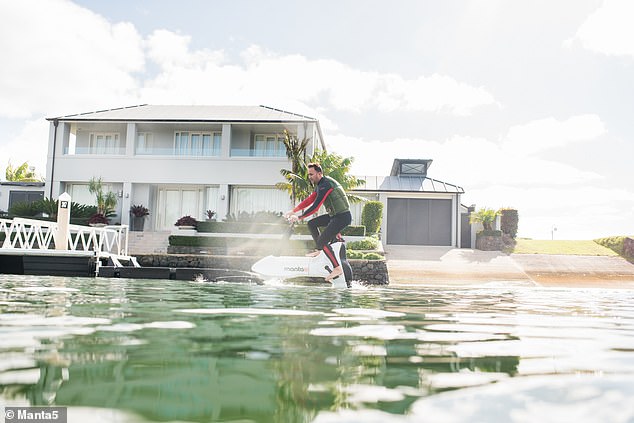 The company says the bike will 'change both cycling and watersport - with riders able to take it on rivers, lakes and ocean shorelines'.

Cyclists can reach speeds of up to 12 mph on open water which is comparable to traditional sailboats, according to Mr Johnston.

Manta5 founder Guy Howard-Willis says the bike will be a leisure and sporting category in its own right within three years of its US launch.

The bike was originally launched in New Zealand as part of a limited pilot to determine demand and study usage, says Mr Howard-Willis.

The company says it has had demand from around the world since the first videos of the Hydrofoiler were made public in 2017.

However, the majority of requests have come from the USA, which is a 'progressive outdoor sports market', according to Mr Johnston.

'As we've personally encountered through hundreds of distribution requests, the US is active and enthusiastic about supporting the latest in industry innovations.'

The bikes are made from strong carbon fiber and aircraft-grade aluminum, making them buoyant and light enough to carry, designers claim.

It is difficult to get used to when you first start riding it and can sink into the water if you suddenly stop moving, according to Mr Johnston.

'Mastering it is like cycling for the first time. It might take a few attempts, but once you get the hang of it, hydrofoiling is a lot of fun,' Mr Johnston said.

It is designed to be very lightweight and so easy to carry to and from the beach, open waters or lakes, he said. 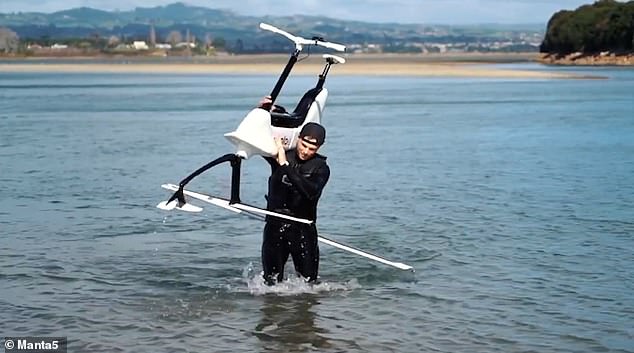 The bike is made from lightweight materials such as carbon fibre and aluminium, according to Manta5 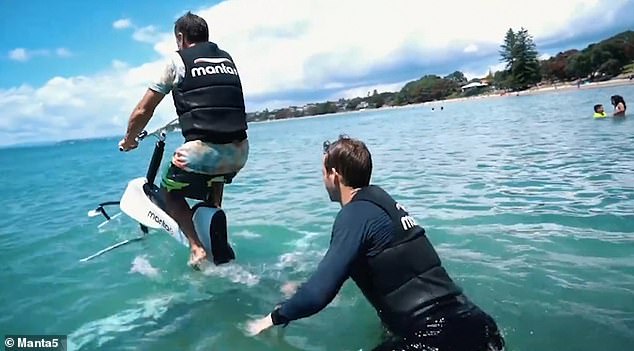 The company say the bike will help to change both cycling and watersport - with riders able to take it on rivers, lakes, ocean