Scientists have put miniature 3D glasses on cuttlefish and played them movies to reveal how they decide the best distance from their prey before they attack.

A University of Minnesota-led research team built an underwater theatre and equipped the cephalopods with 3D glasses.

Stereopsis, or binocular vision, is the perception of depth produced by the brain when it receives visual stimuli from both eyes in combination.

Cuttlefish with only one eye to see the shrimp took longer to position themselves correctly – because they were unable to use stereopsis.

It's the first study to reveal that cuttlefish use their eyes in tandem to catch their prey, before they clutch it with their extending toxins and subdue it with toxins. 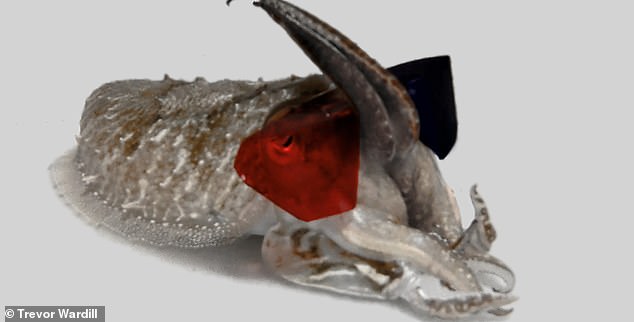 Groovy man: Cuttlefish are marine molluscs belonging to the class Cephalopoda, or cephalopods

'How the cuttlefish reacted to the disparities clearly establishes that cuttlefish use stereopsis when hunting,' said Trevor Wardill, assistant professor at the university's College of Biological Sciences.

'When only one eye could see the shrimp, meaning stereopsis was not possible, the animals took longer to position themselves correctly,' he said.

'When both eyes could see the shrimp, meaning they utilized stereopsis, it allowed cuttlefish to make faster decisions when attacking.

'This can make all the difference in catching a meal.'

Cuttlefish catch a meal by deploying their tentacles and, to be successful, need to work out depth to position themselves at the correct distance from their prey.

If they are too close, the prey may be notice their predator and escape, while if the cuttlefish is too far, their tentacles will not reach. 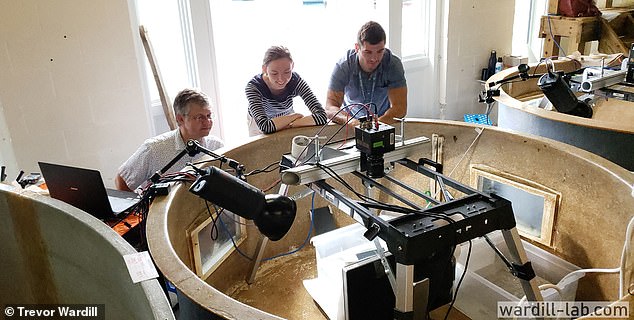 The research team next to their setup, which had a computer screen immediately next to one side of the glass tank containing the cuttlefish

Stereopsis is the process of comparing the images from both eyes and is the way humans analyse depth.

Stereopsis, or binocular vision, is the perception of depth produced by the brain when it receives visual stimuli from both eyes in combination.

When a person stares