Porch pirates beware! Smart Delivery Box that can be remotely locked the moment parcels are placed inside debuts at CES 2020 A new storage device will help customers keep deliveries when they're not home Smart Delivery Box uses a smart latch that can be remotely unlocked and locked Users can track each time the box was opened through a smartphone app The Box will cost $229 and is expected to be available in 'spring 2020'

The smart lock company Yale has announced a new smart lock box at this year's CES 2020 in Las Vegas, which is meant to help protect deliveries from the increasingly common porch theft.

Called Smart Delivery Box, the device is a large lidded receptacle for receiving packages, and it comes equipped with a high tech latch that can be remotely locked and unlocked via a phone app.

The Box has a compartment that can be filled with sand to keep it weighted down, or it can alternately be held in place with external fasteners. 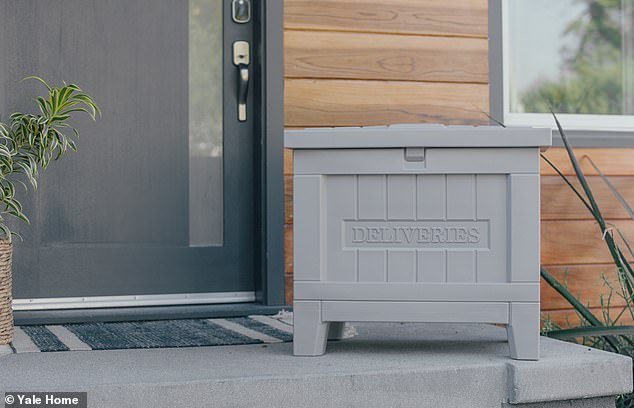 Yale has announced the Smart Delivery Box (pictured above), designed to be left on porches with a Wi-Fi enabled lock that can be remotely locked and unlocked via a smartphone app, something the company hopes will help protect customers from package theft

The Box is controlled through a mobile app called Yale Access, which will let customers share access with other users, maybe a neighbor or a housesitter.

It will also keep a history of the exact date and time someone opened the box.

Customers will also be able to use the app to get notifications confirming that alert them whenever the lid is opened without their permission, as well as monitor its battery levels to keep the lock from dying on the job.

Previous versions of Yale’s smart locks required a separate networking device called the Yale Connect Wi-Fi Bridge to act as a hub that would relay commands from the phone app to the lock itself.

The new version of the lock in Smart Delivery Box will have its own internal Wi-Fi received, so customers will be able to communicate with it directly.

PREV E-scooter injuries quadrupled in four years
NEXT Technology Researchers warn Congress of the urgent threat of deepfakes and other digital ...