LG wants to turn your kitchen into a tiny farm with an ‘indoor cultivating machine,’ a climate controlled refrigerator revealed at CES 2020 that will grow enough arugula, kale, and basil to feed a family of four The home appliances giant announced a new high-tech home garden appliance Outwardly built like a refrigerator, it will grow 20 different kinds of vegetables The company will sell seed pods and let users control temperature, LED brightness, and watering times through a smartphone app

LG has revealed a new home appliance that will shrink the distance from farm to table down to just a few feet.

At CES 2020 in Las Vegas, the Korean company demonstrated an experimental new kind of refrigerator-like appliance that's meant for actually growing food instead of storing it.

The company is still working on a final name but variously describes the appliance as an ‘indoor cultivating machine’ or ‘column garden.’ 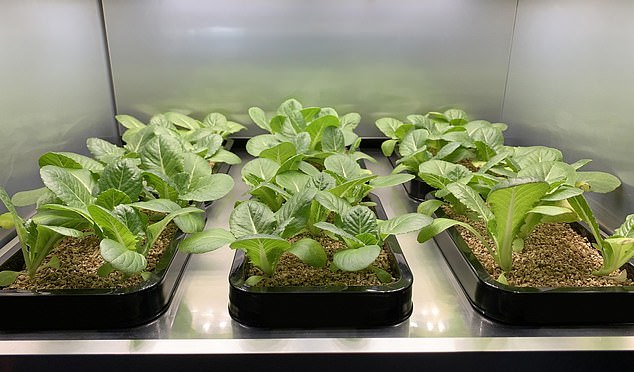 LG revealed a new kitchen appliance (pictured above) at CES 2020 in Las Vegas, described as an 'indoor cultivating machine,' it will grow 20 different kinds of vegetables including romaine lettuce, basil, chicory, and arugula

From the outside, the appliance looks like a conventional refrigerator with a see-through glass panel.

Inside are four vertical trays meant for growing vegetables and leafy greens, which LG says will be sufficient to feed a family of four.

LG says the appliance is intended to give people access to healthy vegetables year round, which could be useful in regions, or seasons, where greens can be hard to come by.

LG will supply 24 different types of seed pods that are guaranteed to grow inside the appliance, including romaine lettuce, arugula, chicory, basil, and kale.

There’s space for up to 6 seed pods to grow on each of the four shelves, depending on the size of the vegetable selected.