Leaked photos confirm Samsung's next flagship phone will be called the Galaxy S20 and feature a large four-camera setup on the back The images taken by an anonymous source were published by XDA Developers They confirm that the successor to the Galaxy S10 will be called the S20, not S11 The S20+ has a four-camera setup on the rear face, a flat screen and thin bevels This is our first actual look at the upcoming device outside of 3D renderings

Leaked photos have confirmed that Samsung's next flagship phone will indeed be called the Galaxy S20 as had previously been speculated.

The revealed images of the South Korean firm's Galaxy S20+ shows that the handset will feature a four-camera setup on the back along with a flat screen and thin bevels.

Although computer-drawn models of the Galaxy S20 range have previously made the rounds, yesterday leaks represent the first look at the new phones 'in the flesh'. 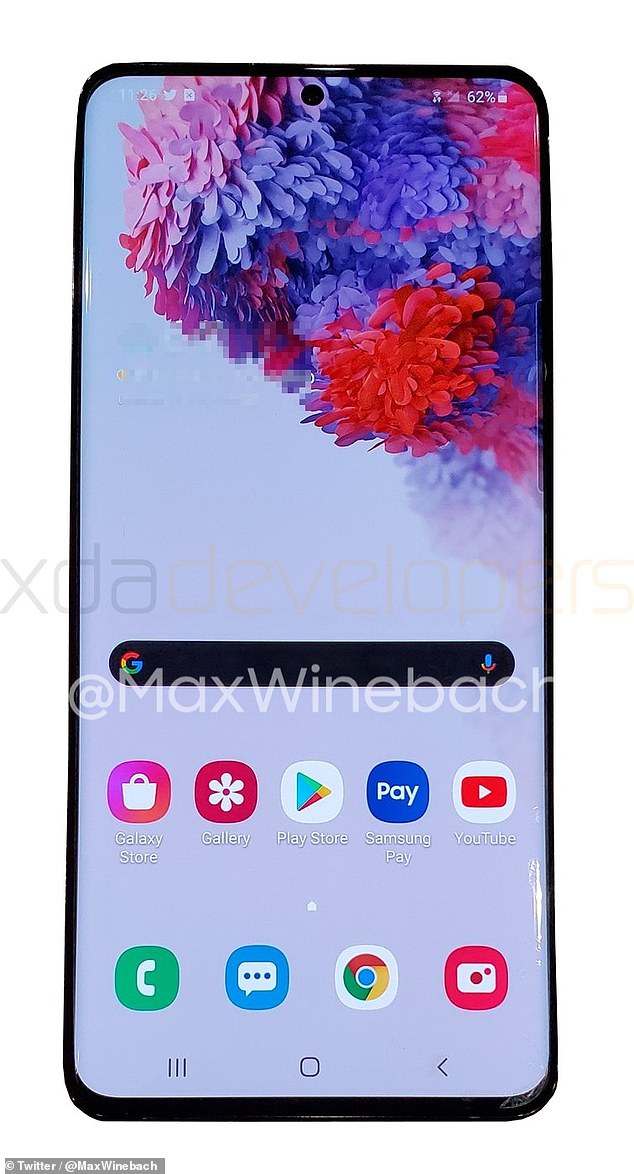 Leaked photos have confirmed that Samsung's next flagship phone will indeed be called the Galaxy S20 as had previously been speculated. Pictured, a leaked image of the Galaxy S20+

The apparent leaked images of the Galaxy S20+ were published by writer Max Weinbach on XDA Developers, who said that he received the shots from an anonymous source.

The photographs have reportedly been edited 'image to protect the source'.

'In the image of the rear, the first thing that stands out to us is the camera setup. We can see a total of 4 cameras, a flash, and what looks like a microphone hole', Mr Weinbach wrote.

'On the right side of the phone, we can see a volume rocker and a power button. There is no Bixby button, unlike in the earlier S10 series,' he added.

The 'Bixby button' was a control which activated Samsung's Bixby voice assistant.

Other features of the new design appear to include a smaller, centred 'hole-punch' forward-facing camera in the otherwise uninterrupted 'Infinity-O' display which comes with a pre-installed screen protector and is surrounded by thin bezels.