Some prehistoric crocodiles were WARM-BLOODED enabling them to survive the Jurassic cold snap 150 million years ago, study of fossilised teeth shows Ancient ancestors of today's crocs were actually warm-blooded to survive cold   British researchers analysed oxygen isotope compositions in fossilised teeth At least one crocodile of the extinct metriorhynchid family was warm blooded  Warm blood was key to evolving a dolphin-like body and living in open oceans  Metriorhynchids thrived during a period of global cooling 150 million years ago

Some ancient ancestors of today's crocodiles were actually warm-blooded, according to a new study.

Palaeontologists from the University of Edinburgh analysed the mineral make-up of fossil crocodile teeth from the extinct metriorhynchid family.

They discovered at least one ancient crocodile ancestor from the metriorhynchid family that wasn't cold-blooded.

The results indicate that they could raise their body temperature to stay warm as temperatures fell, in the same way as modern-day birds and mammals.

And it might have helped them thrive during a spell of global cooling around 150 million years ago at the end of the Jurassic period. 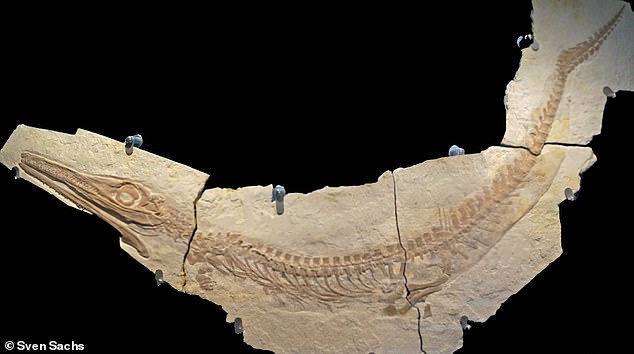 Skeleton of a metriorhynchid, an extinct family of aquatic crocodyliforms - crocodile ancestors

WHAT ARE THE THREE GEOLOGIC ERAS?

The Mesozoic Era is a the name given to the period from 250 million to 65 million years ago.

The era is divided into three major periods: Triassic, Jurassic and Cretaceous.

Mesozoic was the age of the dinosaurs and lasted almost 180 million years.

The Mesozoic Era followed the Paleozoic Era, during which arthropods, molluscs, fish and amphibians all evolved.

Mesozoic was followed by the Cenozoic Era, during which the continents assumed the configuration that we know today.

Being warm-blooded was key to metriorhynchids evolving a dolphin-like body – including flippers and a tail fin – and venturing out into the open oceans.

Today's crocs are cold-blooded and cannot generate their own heat, meaning that they hibernate or go dormant during the colder months.

‘This discovery helps us better understand these bizarre crocs,’ said Dr Mark Young from the University of

National anthems are SCRAPPED as the NRL All-Stars match kicks off after ...